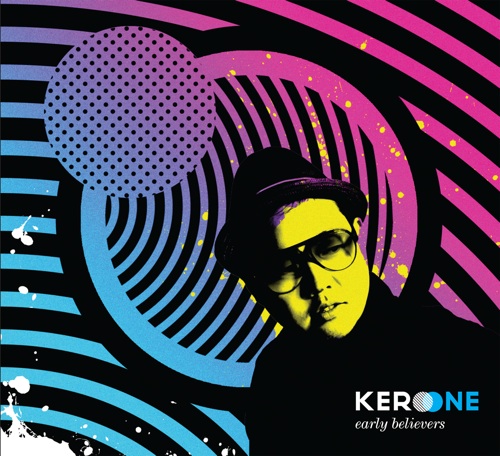 When it comes to hip-hop, fans of the genre do not usually think of Japan as being ahead of the curve. Maybe that notion it because the ethnocentric attitude of most Americans, or maybe I should just speak for myself. Yet, it was a Japanese DJ in Tokyo that first played Kero One’s first 12″ in the club and it saw almost immediate success. A couple years of touring later, Kero One went on to finish his first album, “Windmills of the Soul,” which was also critically acclaimed–Leemix Magazine even called it the Best Hip Hop Album of 2006. Those were the true “early believers” of this artist, but sometimes it’s better to join the bandwagon late than never at all.

“Early Believers” is the new release from the producer/rapper/label owner Kero One, who bases his own Plug Label out of San Francisco. Like much of the underground hip-hop from the bay area, the music on this disc is both creative and fresh.

After the first two tracks, “Welcome to the Bay” and “When the Sunshine Comes,” respectively, the listener will feel completely delighted by the feel good music. Both feature fantastically airy arrangements that consist mostly of jazz and soul influences that utilize Kero’s own skills on the bass, piano and behind the boards. The latter enlists Vince Czekus on the acoustic guitar who adds musical textures to many of the tracks on “Believers.” The description might sound a little cluttered but it all meshes extremely well due to the lack of having any element being too overbearing. It is soft, which only compliments the addition of UK singer Ben Westbeech on the chorus.

Then “Keep Pushin'” sounds like sounds like a mixture of the Kanye West of old and the more digitally polished version of “808’s,” from a rhyme scheme standpoint, candor and even vocally. Unlike the traditionally recognized definition of “pushin'” made famous by the likes of the Clipse, Kero is just referring to pushing on through his normal life. This is exemplified through his direct lyrics:

“All these minutes
They keep on tickin’
All these limits
They keep me kickin’
And most these critics
That’s dissin’ or said I’m trippin’
Thank you for picking me up
I ain’t quitting or giving it up
Too many enemies in my path
Reality shows kiss my ass
But I’m watching to get my laughs
Screaming at the TV ‘win that cash!’
And that’s win my lady calls
Priorities or could’ve just stalled
Next I know, we’re going shopping
Like the shoes, buy ’em, like big things popping
And that’s the way love goes
Give it all until there ain’t more
Surf the net ’til my eyes go soar
A day in the life of an average Joe
Even though I travel the globe
Rock shows
Come home with my head down low
Non-believers zip your lip
And believer won’t quit til I reach my goals”

This premise of every day hardships is also explored later on the equally effective “Stay on the Grind” featuring Ohmega Watts. While Kero’s words might not have you flexing your brain-muscle to discover metaphors, similes, alliteration, or whatever other literary mechanism, they still flow like the breeze over the nice production. Further, the chorus of “Keep Pushin'” has Kero singing the hook with slightly digitized auto tune; yet, it is not nearly as annoying as Kanye’s usage of it.

Two more highlights come with the helping hand of an artist named Tuomo from Finland on “Love and Happiness,” which has that vintage soul sound, and the playful “Let’s Just Be Friends.” The tracks have vastly different sentiments but the collaborative effort is golden on both efforts. “Let’s Just Be Friends” is just a great, catchy, synth-driven track that speaks on those fateful words when someone wants to end a sexual relationship and some of the potential reasons behind this decision.

As “Early Believers” begins to swell in its’ own creativity, Kero One showcases his skills behind the board on instrumental tracks (“A Song for Sabrina”; “On and On”). The instrumental tracks are nice interludes but it is a bit daring to close an album with one and it would have been preferred to close with the aptly titled “Goodbye Forever.” The only other complaint a listener could nitpick at on “Early Believers” is the fact that the LP is mostly surface-level from a lyrical perspective.

Still, “Early Believers” has gained one more fan in this critic–and hopefully more in some of the readers of Rapreviews.com. Kero One’s fine new album is like the perfect hip-hop summer album that delves into the thoughts and concerns of the everyday man. It’s time for you to believe.