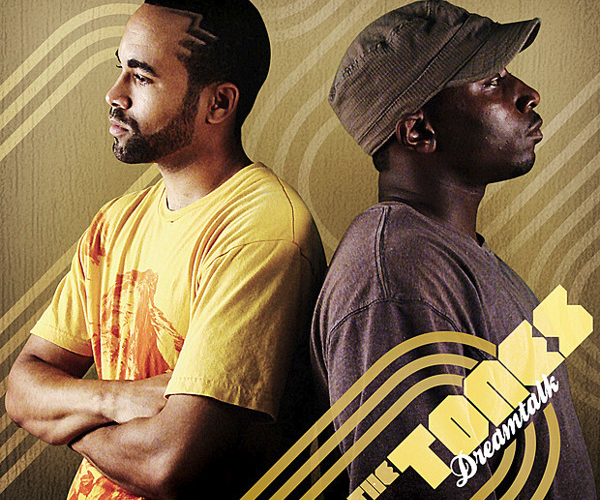 It is somewhat ironic that my other review this week is of Havoc’s latest solo album. That esteemed rapper/producer, one half of the infamous Mobb Deep, actually serves as a great reference point for a group that one would initially deem completely unrelated, The Tones. On paper, we find a soulful outfit from the Bay Area of California releasing their debut album. Being brutally honest, the first listen isn’t even that impressive. Yet after a few spins, front to back, you begin to realise that “Dreamtalk” is an excellently crafted album – and certainly one that should find favour with a large enough segment of the market to get them duly noticed.

As previously mentioned, the first spin of the whole album left me somewhat empty – it seemed like a “typical” underground album. Corny soulful beats, solid but dull lyrics, that familiar feeling of self-importance. Thankfully, I was WRONG. The Mobb Deep comparisons suddenly kicked in, as you have a rapper/producer in Retro, and a rapper/singer in Suhn – read Havoc and Prodigy (although P can’t sing like Suhn!). Whilst Havoc specialised in bottling up the electric crackle of moody New York nights in his soundscapes, Retro of The Tones is a developing master of encapsulating the Bay Area sunshine in his soulful, melodic beats. Now I know that, for a short while at least, Mobb Deep had The Alchemist knock out some classic soulful shit for them (think “Win or Lose”), but imagine if they relaxed over a whole album of that kind of vibe, with a positive subject matter, and you start to envisage what The Tones sound like.

Their reference points also seem to lie in acts like Common (pre-UMC fiasco) and Little Brother (especially on “No More”), and their rhyme patterns are, on the whole, very good, balancing intricacy with a wide range of topics. Over the course of fifteen tracks, there are a couple of natural misses, and perhaps it takes a few listens too many to lock on to their emotional wavelength, but on the whole their verses are consistently strong. The first six tracks are superb, with “From the Ground Up” and “Turn Me On” proving to be melodic highlights. Later on in the album, particularly strong efforts include the familiar closer “Without You” and the crazily experimental title track.

As previously alluded to, The Tones perhaps could have trimmed a bit of fat from “Dreamtalk” – although there are no straight up wack tracks, it can start to feel a touch long (in the way that Elzhi’s “The Preface” did), and a song like, for example, “Far Away” is a bit cheap-sounding, and “Fly Angel” veers dangerously close to “corny” territory. Yet their debut album is genuinely promising – you’re still left with at least 10 or 11 worthy songs – especially considering the void that has recently been created by a lack of simple and soulful long plays. Artists such as Kanye and Common seem to be in more electronic phases; Little Brother have lost 9th Wonder; Black Milk is spreading his wings… In other words, whilst many artists still contain soulful tracks, very few are now committing to the idea of a whole hour of it. This is where The Tones succeed in creating a quite sumptuous mood that possesses a high level of replay factor as background music; it just so happens to be blind luck that they can also hold their own lyrically. There aren’t many truly outstanding individual tracks, but the collective is strong throughout, and it is, for want of a better word, attractive music. One can confidently predict that they will find their fan base with ease, as “Dreamtalk” is an assured and promising first outing.