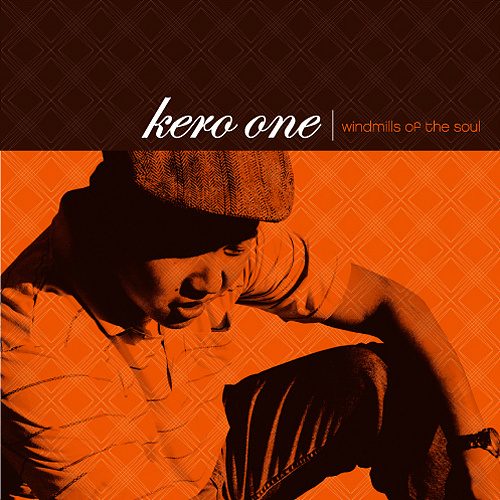 Kero One :: Windmills of the Soul

“Rap’s full of good guys, 50 Cent is the villain,” a budding Queens rapper once quipped while blazing up the mixtape circuit on his way to become one of the best selling artists of our time. The beauty of said line lies of course in the fact that rap is in fact not full of good guys, but rather full of bad guys. But to stay ahead of the pack, 50 dismissed them all in one fell swoop as good guys and declared himself the sole villain. Before I get accused of bad-mouthing hip-hop worse than conservative commentators, let me introduce you to one of the many truly good guys as they undoubtedly do exist in rap music. Kero One was born into a traditional Korean household in California’s Bay Area. After graduating from college and spending some time in the corporate world, he got back together with an earlier love of his – music. A couple of 12-inches took him as far as Japan, and now he’s back with his full-length debut “Windmills of the Soul.”

While not explicitly representing Asian-Americans, Kero One’s music does reflect his upbringing to a certain degree. On “Windmills of the Soul,” God is not merely present in the liner notes, He is the Creator bringing into existence man and woman so they can lose and find each other (“In All the Wrong Places”). He is the ultimate recipient of universal praise (“Give Thanks”). He is the one who is addressed when guidance is needed (“Tempted”). On the musical side, Kero One profits from those early piano lessons he was forced to take, as he now plays keys and bass himself. Yet at the same time there were the influences that lead to Kero One having his own hip-hop album in 2006. Indeed he is quick to acknowledge what hip-hop means to him, recounting the days when him and his buddies would blast Cypress Hill and walk the way of the stoned. For his parents however “it was all about textbooks, and grades with A,” demands which he naturally found “hard to juggle as a hip-hop slave,” as he reasons on “My Story.”

With several flashbacks of that kind, “Windmills of the Soul” very much presents an artist who has come of age, who knows how he wants to express himself and what message he wants to get across. This makes him the complete opposite of another debutant I was recently asked to comment on, seemingly ready to take over the world with sub-par product and an unoriginal style, relying on a false sense of security just because he had rap’s trademark “The world is mine” jargon down pat. There is a new school of aspiring rappers who pattern themselves strictly after a handful of role models, failing to realize that the more guiding stars enlighten your path, the sooner you’ll discover a direction that is your own.

With influences ranging from the skater and graf scene to Left Coast collectives like the Hobo Junction to musicians from times past such as jazz harpist Dorothy Ashby (inspiring the album’s title with her “Windmills of the Mind”), Kero One certainly found his, now enabled to radiate himself: “Kero’s on the scene, shining light you missed.” His approach is generally respectful, balancing conviction and constraint: “In this game I don’t claim to be a veteran / I’m just spittin’ lyrical Excedrin for brethren / medicine to keep your head from spinnin’.” Yet he’s also confident enough to criticize, “Hip-hop houses many freeloading MC’s / I feel there’s only a few tenants payin’ their fees.” As a rapper, Kero One pays his with dedication, thoughtfulness and humility, rather than delusions of grandeur or technical feats. Ultimately however, in his case it would be pointless to distinguish between MC and musician, between the rapper boasting, “Music’s my transportation and my tank is full,” and his alter ego “on production providin’ the fuel.”

Musically, where Kero One is at, hip-hop’s been there and done that. He serves up chunks of sixties and seventies jazz, funk and mainly jazz funk, occasionally sprinkled with some scoops of soul, but always backed by a fat beat. Combining samples and original instrumentation, this is truly a seamless blend of past and present if we ignore the fact that people already produced and rapped like this in the early 1990s (think Talkin’ Loud). But as “Windmills of the Soul” sometimes seems to lack the element of surprise, it’s nonetheless awe-inspiring in terms of its professional make-up. About every instrument that made folks originally get down to jazz funk can be found here, perfectly arranged, building beats from the ground up or blending in as part of a break. It’s evident that Kero studied music, not just as a classically trained piano player when he was a kid, but later on when he was looking for a way to let “imagination flow and creativity go.”

With Kero One always rapping in the same comforting tone, there’s a point where “Windmills of the Soul” risks drifting into easy listening territory. So unless it catches you in the most mellow disposition, you’ll start looking for hard edges, sharp angles, abrupt changes, all the stuff that is known to keep hip-hop on the edge. From that perspective, “The Cycle Repeats,” Kero’s tribute to graffiti, is the closest thing to a typical hip-hop track with its thumping rhythm section serving as a backdrop to the fly lines and curves drawn by the funky flute and the Artifacts and Pharcyde scratches. But while Kero One and accompanying players rarely get really down and dirty, patience will pay off in the end, as three minutes of “Its a New Day” or seven minutes of “In All the Wrong Places” will not expose these tracks as boring but reveal how well crafted they actually are.

Supported by able musicians but ultimately a one-man show, Kero One presents a synthesis of soul, body and mind, clichÃ©d though it may sound. Aspiring to “break the barriers, unify you and I / cause under one god we all are human kind,” his approach may be more universal than his actual appeal, but his path is probably one seldom travelled by the multitude anyway. Urging us to twist our “thinking caps to the side and ride the music,” Kero One is in lock step with fellow West Coast acts like People Under The Stairs and Lightheaded, seeing hip-hop as a means to attain a higher level not simply defined by the number of records sold:

“I’m lookin’ at the crowd for that one who felt me
helpin’ me raise the bet on these cards God dealt me
But still some doubt is worth pursuin’
We’ve all been given gifts, so now how we gonna use ’em?
I’m on the outside lookin’ in at the confusion
I been there before, swingin’ fists at those illusions
Now I fight the hands of time with my might
so my life can be seen as worthy in hindsight
I clutch my mic tight and ponder the way
reflecting back sometimes on this temporary stay
But I won’t get attached cause I know where home is
and reach out to souls that are currently homeless
Cause some claim the Earth and clown around till it hurts us
In this circus a juggling actor makes me nervous
Maybe it’s entertaining when you look at its surface
but step outside the ring and ask: Is it all worth it?”

Kero One :: Windmills of the Soul
7.5Overall Score
Music8
Lyrics7