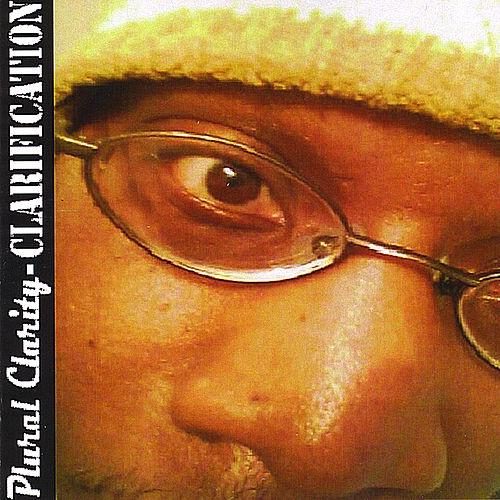 Plural Clarity reminds me of an emcee you might watch at a poetry slam, or hear rapping acapella at a cafÃ©, and have you thinking to yourself, “this guy has some pretty profound ideas, why isn’t he the next Mos Def, or at least the next Saul Williams?” For better or for worse, “Clarification” seems to answer that question. Plural Clarity can write pure lyrics fairly well, but is somewhat incapable of fluidly switching between the mediums of writing and recording. It sounds as if all verses are written before having heard the beat, and adapted to the drum pattern simply by slowing down and (more often than not) speeding up his recitation in effort to catch up with the snares. If you’re sometimes irked by Talib Kweli’s tendency to sacrifice flow by stuffing syllables into his bars, you’ll likely change CDs before you hear him rap, “Our after hour accelerated thought processes recess rhyme when combined, consummate perfection, transcend any measure of time.”

This is not always the case, however, as he sometimes attempts to channel Pharoahe Monch with a sing-song flow, to mixed but admittedly better results than his rapid-fire flow. The detriment of Clarity’s lack of mic presence and flow becomes obvious by the fact that Cleen, who guest raps on four songs, is a refreshing break from Clarity, if only because of his conventional delivery:

“A little jewelry, bright lights and hundred dollar bills
Won’t cover up the fact that you ain’t got skills
So write raps about peeps disturbing nights
Then watch ’em all get bought by suburban whites
Is that what you call art?
When you tell your family, ‘hey, let’s go out someplace nice!’
Do you take ’em to Wal-Mart?”

None of the mentioned flaws of the album are helped by its rather ordinary production, nor its noticeably poor sound quality. Ofcelfe’s simple, jazzy “Munidal” and Skylab’s upbeat boom-bap offering on “Put a Fire Out With a Sledgehammer” are a couple of the memorable beats on the record, but most of the production is forgettable and bland, as if created before really mastering the art. If I seem overtly harsh in my criticism of the album, it’s only because there are so many talented wordsmiths that don’t seem to work on the craft of delivery and flow like they do at boasting their large vocabularies. “Clarification” is not without value, it simply lacks the essentials of what makes hip hop enjoyable to listen to.