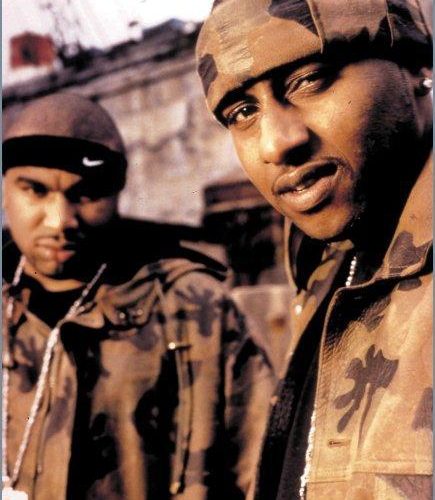 There’s so much going on in the lives of Capone and Noreaga right now that it’s hard to keep up with it all. Nore was arrested last week for assaulting a man at a Fatburger. He followed that up with a radio interview where he said some controversial things about Kanye West, and to top it all off he’s been on the receiving end of some insults from gossip blogger Perez Hilton. Thankfully for Nore, there are plenty of good things going on in the superthug’s life to bounce off of all that, most notably the brand new CNN album he and Capone have dropping March 17th. With so many topics to talk about I caught up with both Capone and Noreaga to discuss all things CNN related, starting with the Fatburger incident.

Adam Bernard: First of all I know you probably can’t speak too much about the Fatburger incident but…
Nore: It was a stupid incident. Everything that you’ve heard is not the truth. It is unfortunate but we got a lotta press out of it, so March 17th. {*laughs*}

AB: Why are you spending time beefing with Perez Hilton?
Nore: Actually, I didn’t know how big this dude was. He sent about 22,000 people to my website. We’re normally used to getting 6,000 per day. At the end of the day I want to big Perez Hilton up for bringing the rest of the people to the site.

AB: I listened to a radio interview you did right after the incident and you made a comment about Kanye West that was a little bit controversial. Do you want clear any of that up?
N: Hell yeah, I would love to clear it up. What I actually meant was I like Kanye West and Kanye West defends that community (the gay community). I didn’t mean what I actually said, I don’t even want to repeat it. I was ashamed of it. I was so caught in the moment at the time that I said something that I totally didn’t mean. I have a lot of respect for Kanye West, I listen to all his music, I think he’s a great musician, artist, and a person at that, so I would love to apologize. I’ll say straight up sorry. Only a man can really say sorry.

AB: Now that we have all that covered let’s talk about the new CNN album, Channel 10. It’s been a minute since you two have released anything. What inspired you to get back into the studio together?
Capone: At the end of the day, we missed each other. We missed making great music. The fans missed us. It wasn’t no factor of us being broke or anything. It was nothing like that and it wasn’t like we were forced to do another album, or we owed another album. We came back to do this because we wanted to. We wanted the fans to understand that we make great music and just missed each other, man. We missed being in the studio together, and this time we said what we’re going to do is do something different with the album, we’re gonna interact like crazy so they can see how we’re really evolving with this album.

AB: Tell me about the album. What can listeners expect from it?
C: The album is real grimy. “Rotate” was just the first radio single, it was a jump off for CNN because we’ve never had a radio record like that, but other than that the whole album is really hood, man. It’s really really hood.
N: We went in there, man, and took it back to the essence. It’s predominantly a real hardcore album. AB: Aside from being grimy, your music has always had a fun and entertaining element to it. It’s always been grimy/feel good music. This makes me wonder, what’s a recording session with CNN like? How crazy is that booth?
C: Real smoky. The booth is real smoky, man.
N: And it’s just mad jokes. Me and ‘Pone usually snap on each other, especially if our DJ, Butch Rock, is around. It’s a whole bunch of smoking and a whole bunch of jokes being cracked.

AB: You gotta have some good stories from this project.
C: Man, we had so many. I think one of the wildest sessions was when my man spilled Hennessy on the boards and the whole boards started smoking. We was crazy scared. We thought we’d lost everything.

AB: Do you have a no liquids rule now?
C: Oh yeah, definitely. No liquids around the boards.

AB: You’ve had careers that have spanned over a decade. Can you compare the rap game now to the way it was back when you first started?
C: There was no internet like that (back when we started), there was no blogging, the game was raw. We didn’t have all the outlets we have now to make it happen. The digital aspect of music just totally did like a 100% 360, I’m talking about from recording on reels and tape to Pro Tools. The game just switched, man. I wish Pro Tools was out when we did The War Report, but then again maybe the album wouldn’t have sounded so hard.
N: (The rap game) has changed and it’s continuing to change and I suggest everybody change with it. I think it’s worth it to keep yourself out there, keep yourself relevant. I want to change with time. One of my favorite artists is LL, another one is Fat Joe, and he’s my friend. I like the evolution, man, I like to see him continue going out there and doing what he does and changing with the times. I would love to be like that.

AB: One of the big changes happening in the industry is that people are making less money all around. For the new jacks it’s a little different because they didn’t experience what it was like in the 90’s, but how does it affect you as an artist who knows what it was like in the 90’s and knows what it’s gonna be like now?
Nore: It just gives me a wide perspective on life. I remember when if you had made a radio record you were looked at funny. I remember that era. Right now it’s like if you don’t make a radio record I don’t think a record label even wants to talk to you. That’s the biggest difference. The difference is me knowing both and just rolling out with it. AB: Do you think artists will be able to handle the fact that they might make half as much money as they used to, but everyone’s gonna make half as much money?
N: I mean, yeah, that’s why I went independent. I don’t think it’s fully about the money part for me, but I think that the fact that I don’t own nothin, man. It’s like renting a house, rentin, rentin, rentin, then if you get the opportunity to own something you jump on that opportunity because of how you’ve been rentin so much. So if you were offered the opportunity to own a house at the same cost as rentin it I believe anybody would jump on it. At the end of the day, if this album is a classic and it’s one of those albums that you’re gonna keep listening to and people keep buying, at the end of the day we own the masters and that’s a big thing. That’s the biggest difference because if we do wind up with a ringtone at least we’re the people negotiating it.

AB: Earlier you mentioned reaching new fans. With Hip-Hop’s audience now being infused with a whole new generation of listeners, how are you going to find ways to relate to these 13, 14 and 15 year olds?
C: I’m from the street and what was relevant when I was 15 is relevant now. What’s relevant 15 years from now is gonna be relevant now, so at the end of the day, as long as you’re kickin real shit the kid that’s 15 or 14 is gonna relate to you regardless.
N: My nephew is 18 years old and he’s pretty much in that generation and instead of me giving him all the knowledge I allow him to give me knowledge. I look at my nephew and he hears things on the internet and is like “oh did you see this, homeboy dissed him on the internet,” and he thinks that’s gangster and I can’t tell him it’s not, all I gotta do is… I acknowledge how the young generation thinks. At the end of the day sometimes it’s not about me telling him what to do, sometimes it’s about me being a good listener.

AB: You just mentioned one of my biggest pet peeves, the whole concept of the internet, or YouTube, battle. I’m like, you’ve gotta be kiddin me.
N: Exactly. My nephew said it to me the other day, “yeah he went straight to the internet and he dissed him” and I wanted to say why do you think that’s gangster? Why do you think that’s dope? But I shut up and I let him speak for his generation and that’s what they think is dope, so that’s the reason why I focus a lot of time on the internet, it’s because the younger generation, this is what they do. That’s why I blog. I blog because the younger generation blogs. It’s not like blogging takes away anything from my life like I stopped doing this because I started blogging. The only thing I’m blogging is my life as is. I tape it and send it and edit it and then get right back to it. The younger generation thinks that hot, so I’m with it.

AB: You had a song called “Nahmeanyaheard.”
N: You know what I mean!