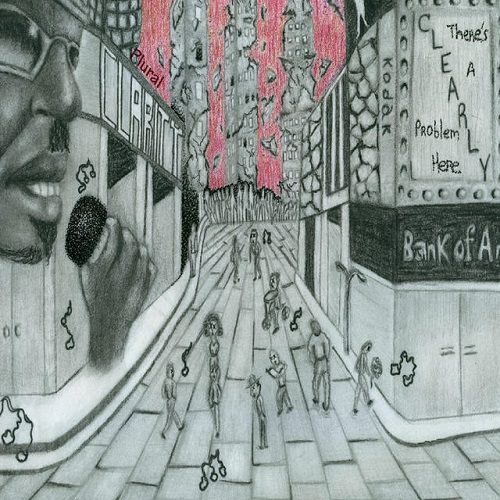 In the 1980s, Daniel Johnston, a musician from Austin, Texas, made a series of homemade recordings that became cult favorites among indie rockers. Nirvana’s Kurt Cobain was photographed in a Daniel Johnston shirt, and everyone from TV on the Radio to the Flaming Lips have covered Johnston’s music. Johnston’s recordings are amateurish, done direct to tape and made with a cheap guitar and cheap keyboard. What his fans responded to wasn’t the production quality, but rather the honesty and pure emotion that Johnston managed get across despite his rudimentary production values.

I kept thinking of Daniel Johnston as I listened to Plural Clarity’s sophomore release, “‘Clearly, There’s A Problem Here…'” From the hand-drawn album artwork to the dodgy production values, this looks and feels like outsider art. And in a way it is; Plural Clarity has been operating outside the mainstream record industry for his entire fifteen year career. He released two albums on the now-defunct Life For The Better records. He lived in Lancaster, California before relocating to Lithonia, Georgia, both suburbs far outside a major music city. The music he makes is outside of mainstream hip-hop too, focusing on sincerity and earnestness over swagger.

Plural Clarity is nothing if not a thoughtful, positive rapper. The liner notes and his twitter feed are full of positive messages like “Clearly, we must realize how some decisions have a lasting effect on our lives and the lives or those we care about,” and “The time/energy & even genius put into unlawful/heinous acts would be better served 4 something productive. Cure cancer or something…” His lyrics follow suit with songs about dealing with the struggle and challenges of life and staying positive in the face of adversity. His intentions are admirable, and it is hard not to want to root for him.

Unfortunately, his delivery isn’t as admirable as his message. He raps in a sing-songy flow that went out with dookie chains and Troop jackets, constantly cramming too many words into his bars. This is further exacerbated by terrible recording. While the liner notes state that this was recorded at Beyond Lymitz Ent in Atlanta, the whole project feels like it was recorded in Plural Clarity’s bedroom. The beats are supplied by Plural Clarity himself along with Ofcelfe and elePHANT Gerald. The Ofcelfe and elePHANT beats are decent, but Clarity’s work suffers from rickety drums that sound like they came from an old Casio.

Plural Clarity obviously put a lot of blood, sweat, and tears into this album. No one can claim that he doesn’t put all of himself into his craft or write thoughtful rhymes. It’s unfortunate that the end product feels so amateurish. Maybe he’ll become a cult hero for people who can look past the production values and appreciate the emotion of the music.