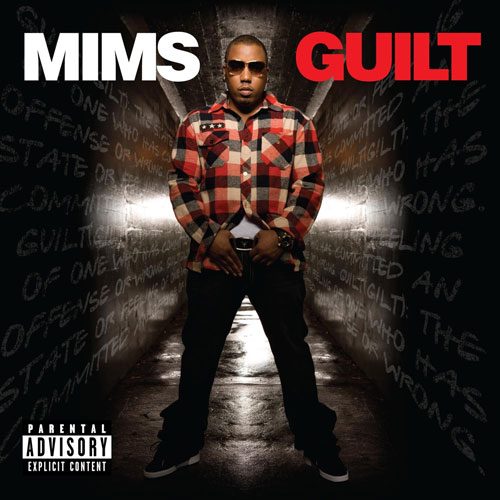 Most rappers use (abuse) skits to glorify how extravagant their lifestyle is and how successful they are at picking up dimepieces to fuck their brains out. On the second track of his new album “Guilt,” Sean Mims uses his first skit to BURY HIMSELF AS AN ARTIST. Here’s a snippet of the conversation that was recorded to go between the title track and his second song:

Now the intent was undoubtedly to portray the prototypical “hater” in hip-hop circles who refuses to give a chance to anything that’s either new, the least bit commercial, or both. Unfortunately for Sean Mims the view portrayed may have been more prevalent than a small minority of haters. Stacked up against first week sales of Jadakiss’ “The Last Kiss,” Mims new album looks like an utter failure. Kiss moved an eighth of a million units, in fact over 135,000 sold, while “Guilt” couldn’t even manage 10% of that total – just 12,400 copies according to retail and SoundScan. THAT’S HORRIBLE, and that’s entirely fair to compare, since both are regional NYC rappers with some past crossover success. Reviews at RR usually come out before such numbers are available but in this case it’s just impossible to ignore the implication that the hater on Mims’ “Skit” was actually RIGHT.

After listening to “Guilt” though I can’t place the blame squarely on Sean Mims frame. The first two singles off the album do exactly what they’re supposed to do. The minimalistic beat by Da Internz on “Move (If You Wanna)” gave Mims the opportunity to flex vocally and catch attention with a volume jumping flow. It was a good re-introduction to the rapper after a two year absence since his debut. “Love Rollercoaster” puts the previously “Hot” MC into an ultra-cool environment with LeToya Luckett singing on a quiet storm beat from Da Internz. Mims smooth game slides silkily over the soft seductive synths for what should have been another surefire hit:

“I never said it would be easy, peep the nigga you dealin with
I-I-I be on million shit, she-she be on that earring shit
Whether club or studio, she wanna know who I’m chillin with
Ridin on that rollercoaster, none of us is feelin it
Then oh she got me feelin sick, I don’t wanna lose this
Money or relationship, please don’t let me choose this
She’s on a constant mood switch, but I say there’s no right or wrong
She swears that she’s right I’m wrong, she’s always tryin to prove shit”

In fact there’s no shortage of smooth tracks on “Guilt,” something that may not work in favor of Sean Mims capturing a hardcore audience, but should at least have promoted strong album sales. They may still. “One Day” featuring Kymani Marley is a tropical breeze of good feelings that carries you along over an excellent Blackout Movement beat. “Be My Hustla” featuring J. Holiday produced by Kaliphat lives up to the last syllable of his name – a pleasant slow-flowing groove of melody and bass. Even Da Internz bonus track “I Do” featuring Nice & Smooth could break through on radio. Maybe hip-hop heads don’t want to hear songs professing undying desire to stay together but the same people who criticize rap as selfish, violent and misogynistic can’t say shit about this one.

There are one or two songs that portray the harder side of Sean Mims such as “Rock ‘N Rollin'” with Tech N9ne and the Swizz Beatz style “Makin’ Money,” but for the most part Mims seems comfortable trying to get in where he can fit in with an audience of club dancers and radio listeners he may have thought to have cultivated on “Music Is My Savior.” Unfortunately for Mims either he or his record label may have overestimated how interested people would be in his sound after a two year layoff.

Nothing on “Guilt” is extremely hateable, which suggests poor marketing and promotion are in part to blame. Nothing on “Guilt” is blowaway fantastic either, which suggests Sean Mims may be as “room temperature” as the hater in his “Skit” believes. Despite having all of the right elements, this album seems far more forgettable than the aforementioned “The Last Kiss.” Any number of things might have changed the outlook here – more big name guests, more outside producers, better marketing or even making “Love Rollercoaster” the lead single instead of the followup. Whatever the answer, people in 2009 will be left asking the question why he’s NOT as opposed to why he’s HOT.