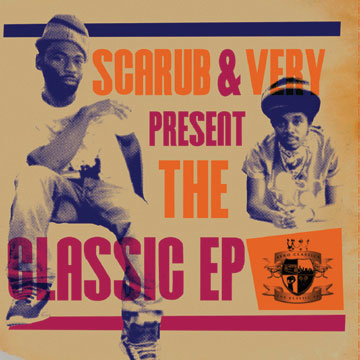 Living Legends is a Cali-based collective that has been making noise for years. Perhaps the most famous member is Murs, who just a few months ago dropped his major label debut, but the rest of the crew is equally dope. The problem is that the collective is pretty sizeable and hard to keep up with. It seems that hardly a month goes by without one member or another dropping an album. If it’s not Eligh or The Grouch dropping a solo, it’s both rappers dropping an album as a duo or Eligh teaming up with his mother for an album. For that reason, I tend to be selective with my Living Legends purchases. In this case, money was the driving factor. Sure, you get less songs with an EP, but you also have to pay a lot less to get your hands on it. This my first time giving LL member Scarub a chance. To be honest, I have no clue who Very is even after hitting up the duo’s myspace. Thankfully, names and identities don’t detract from a dope collection of songs.

The EP kicks off with the worst sound out of the bunch. “Boom In It” is a misguided attempt at a party record that falls flat on it’s back. The track is minimalist synthesizers and deep bass drums mixed with run of the mill lyrics. Track 2 gets things going in the right direction with “Woah.” The interesting thing is that the production on “Woah” is as slick and polished as it is on “Boom In It” but it comes off 100 times better in execution. For that reason “Woah” is the potential party starter “Boom In It” strives to be:

“Straight out LA from which we came, fill out the fire within
Against the grain, instead of frames, we champions with the pen
Here lies the faces with the names who got a flow like the wind
Meaning you catch a drift but can’t refrain or stop and contain
If silence is golden we ghetto blasting platinum
Big bang theories mixed with inner city rapping
Street linguists, these curbside definitions got
Sidewalks larger for your loud evans systems
Figure the bigger the speakers you bang
The bigger the range
Recover quicker than Jigga, the listener’s brains
And through this new movement of music we triggering change
But keeping it moving we cruising and doing our thing
I bring it back like rewinding out the house garage
Over tracks, red lining rhyming, super charged”

Dope lyrics is the main reason you would peep Living Legends, and mixing them over smooth production is a double dosage of dopeness. “Do Thangs” keeps the smooth vibes going with a slick R&B inspired track dedicated to the ladies:

“Life’s a trip and I’m traveling baby
You want to see the world for what it is?
Then hold me tight
We got some kind of wonderful between us
And lately I’ve been think bout you baby
Think we need to unite
Let’s fly out to the hide out and lie out
Turn the lights out, grinding til we wiped out
Take a time out, dining all night out
And find out what makes your heart race
Here try me out”

Scarub and Very aren’t reinventing the wheel with this EP, but doing what others do in a better way. “The Follow Through” is another example of a smooth, almost pop sounding track but flipped with better lyricism and messages than one would expect. “Live From Los Angeles” is a dope tribute to their hometowns with slick lines like “paid my dues in full, like those shits for ransom.” The EP ends far too soon with “Lemonade” where another dope beat is provided with a soul sample flipped something lovely.

“The Classic E.P.” is well worth the purchase for fans of the LL collective. It has one bad song out of six and the rest of the songs are top quality stuff. The duo isn’t reinventing the wheel in any manner, but their execution is close to perfect. The fresh factor comes from the fact that they take polished, catchy beats and mix them with the usual deeper lyricism one has come to expect from the underground. The combination works quite well and the duo mixes the best of both worlds effortlessly. Were it not for one bad track this EP would come with an even stronger recommendation. Here’s hoping the full length follows soon and retains the appeal of the EP.