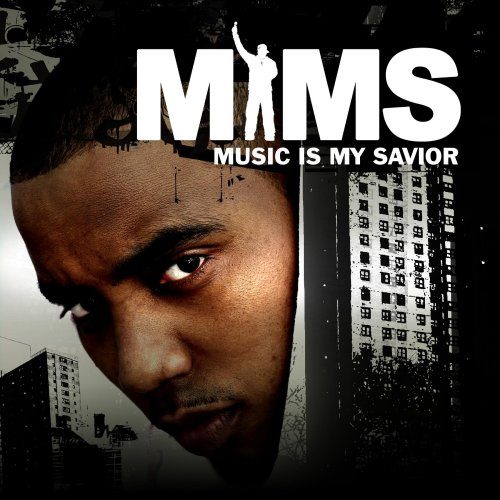 MIMS :: Music Is My Savior

To avoid confusion right at the start, MIMS is an acronym which stands for “Music Is My Savior” while Sean Mims is the given birthname of the actual rapper in question being reviewed. Got it? Good. Henceforth in this review the rapper will be referred to by his last name, uncapitalized. That’s not to say Mims hasn’t generated a lot of capital for Capitol Records though. You may find “This Is Why I’m Hot” irritating, repetitive and an absurd choice for a top ten hit over much more creative songs, but The Blackout Movement’s beat and Mims’ rap actually strike this writer as being tailor-made for radio play. Instead of hitting people over the head with the idea he’s here to save hip-hop music he’s stating the exact opposite – music saved me from a hard knock life in Washington Heights, and I want to share my joy with you via a simple but catchy and danceable hip-hop song.

“This is why I’m hot, I don’t gotta rap
I could sell a mill sayin nothin on the track
I represent New York, I got it on my back
Niggaz say that we lost it so I’ma bring it back
I love the Dirty Dirty cause niggaz show me love
The ladies start to bounce as soon as I hit the club
But in the Midwest, they love to take it slow
So when I hit the H I watch ’em (get it on the flo’)
And if you need it hyphy, I’ll take it to the Bay
‘Frisco to Sac-Town, they do it e’ryday
Compton to Hollywood, soon as I hit L.A.
I’m in that low-low, I do it the Cali way
And when I hit the Chi’, people say that I’m fly
They like the way I dress, they like my attire
They love how I move crowds from side-to-side
They ask me how I do it, and simply I reply
This is why I’m hot”

To give credit where credit is due, TBM may have used a simplistic and repetitive loop, but they did jazz it up a bit by sampling snippets of hip-hop songs that are trademarks of the cities Mims mentions in the lyrics. Mims’ may at first strike rap aficionados as a one-hit wonder, but he’s actually got a lot going for him on “Music Is My Savior.” You can feel the soul coming out on tracks like the Kanye West inspired but BlackOut produced “I Did You Wrong,” where Mims admits to being a true player even though he knows this lifestyle comes at a cost:

“I hit it once right after I dissed her
Then after that tried rap to a sister
Same day, I had her ass in the bed y’all
Same day and she giving me head y’all
I don’t lie, I’m a player for real
I learn the game, so I’m playing the field
I tell the truth, I don’t fill her with lies
They feel on my hair, I feel on their thighs
It’s a tradeoff baby, it ain’t a surprise
You call me a 4, she call me a 5
That’s 30 to skeet, and 30 to slide
And according to me it’s plenty of time, so
I don’t know what you trippin for
We done went through this shit before
A few women ain’t going to like this song
So I apologize now cause (I did you wrong)”

These may be simple tales, but Mims’ flow is a smooth Manhattan flow clearly influenced by the likes of New York greats like Jay-Z while still vocally unique enough to entice a listener to pay attention. The slick Twizz and D. Baker laced “Girlfriend’s Fav MC” featuring J. Holiday is another example of Mims getting his personality over with an above-average flow and a few clever hits of the wordplay:

“Y’all dudes cool but me homey I’m calmer
Like what’s around her neck, I charmed her
Me I milked the cow, I’m a farmer
Her guard’s up but I removed the armor
You just seem to be a part of the problem
Introducin me – the solution
I rocked it just like I’m from Houston
No not the ballplayer, more like the mall player”

For a debut album Mims shows a whole lot of potential on “Music Is My Savior,” and with beats by BlackOut and The BlackOut Movement throughout there’s plenty of music to boom and bang while Mims does the damn thang. This may not be an album remembered as one of the year’s best by December 2007 but it certainly won’t be remembered as one of the worse, and for a guy who had a simplistic rap that was panned by a lot of people who never gave him a chance that’s one hell of a start. Maybe at the end of the day music will not only be his salvation but one hell of a lucrative career.