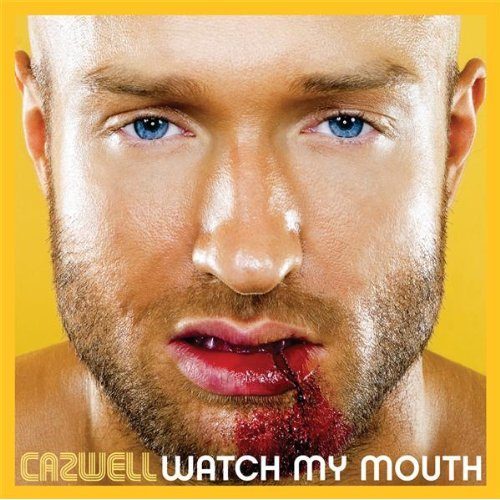 Hailing from the uniquely named Peace Bisquit record label (I wonder if Peace Bisquits are served with Buddha Butter) is Cazwell, a rapper who describes his lyrical and musical style this way: “Imagine if Biggie Smalls ate Donna Summer for breakfast.” Okay. Let’s all imagine that for a second… EWWWWW. Okay Cazwell clearly doesn’t mean thatLITERALLY. What Caz is trying to get at is that his songs are a mixture of club and disco styles with hardcore New York bravado. Let’s see if Caz is the white Frank White lyrically on the disco funk track “All Over Your Face.”

“You wanted it, and I wanted to
What’s left to do? I paid for the room
I’m greasy, grimey, two-timey, for tits an ANIMAL!
And if I want it, I get it, I eat that ass like a CANNIBAL!
I don’t care if you think I’m dirty, I am dirty, learn me
I masturbated ’til my K-Y faded… I’m exhausticated
It’s all over your faaaaaace
Tell me how does it taaaaste?”

Okay, so Cazwell’s not the white Frank White throwing dick to dykes, but he is throwing jizz to his closest oral partners: “I came too close in your direction, DNA on your complexion.” Cazwell would have been better served by claiming he was “Donna Summer eating Eminem for breakfast” because that’s far more like what he’s got here. Cazwell’s got a dirty mind, an Asher Roth appearance, and the Marshall Mathers style ability to throw whatever he’s thinking in your face (or all over it). Perhaps that’s why Cazwell titled his album “Watch My Mouth” – he knows he should give a fuck what he says yet clearly he doesn’t. That’s why Caz can come up with creative crazy tracks like “I Seen Beyonce at Burger King.”

“I seen Beyonce at Burger King
She ordered two cheeseburgers with onion rings
She got a chocolate shake, and a side of fries
Then she looked dead in my eyes and she says
‘Can I borrow ten dollars? I left my purse
in the car, in the car…
It’s ’bout three blocks away and baby
that’s just too far, too far…’
Okay, but you gotta pay me back if you borrow
And have my ten dollars when I see you tomorrow
No actin funny, said – ‘Caz would I lie to you?’
Then she smiled and SNATCHED MY MONEY!”

Clearly Cazwell is not right in the head, which makes “I Seen Beyonce at Burger King” good for a chuckle or two even if Shawn Carter might get a little offended (and adding the munching sound effects at the end was a nice touch). Generally being freaky either mentally or sexually is Cazwell’s favorite topic as evidenced by “The Sex That I Need,” featuring a female rapper named Avenue D doing her best Princess Superstar impression. One can’t help but feel Caz is doing his best to make you laugh or be uncomfortable at the same time, although he often seems downright desperate to be both on tracks like “I Buy My Socks on 14th Street.”

“Why is everybody always lookin at me?
Is it cause I jerk off on my webcam for free?
Cause I’m pickin my nose when I’m thinkin somethin?
And pullin the lint out my bellybutton?
I came from Massachusetts and I don’t give two shits
Watch me pop two zits in your grits”

For a rapper who is willing to profess “I don’t really care what people think” he sure does seem to care a hell of a lot, which makes him almost the paramount opposite of Biggie Smalls. Biggie wasn’t going for funny or shocking either way by rapping that he was willing to kidnap the plantiff’s daughter and hide her in a Brooklyn basement until he beat the rap at trial – it was just the logical if somewhat evil conclusion manifested in his lyrical persona. Biggie bounced back and forth between being being a ruthless gangster and a suave larger than life mack, but neither one was presented as a farce – he was dead serious either way.

For better and worse NOTHING about Cazwell can be taken as dead serious. Throughout “Watch My Mouth” he’s constantly breaking the fourth wall, making jokes about the experiences he’s having, then turning to the camera to say “Can you believe I’m this weird?” The only person this reminds me of is Bizarre, so when you factor in Cazwell’s disco style beats, it’s like Bizarre eating Donna Summer after she ate Eminem. Now THAT is disturbing. Nevertheless there’s something to Cazwell’s approach to hip-hop. Even if he seems to be trying too hard at times, he’s still mostly funny, and presenting his twisted styles over club and dance beats definitely sets him apart from the rest of his peers. Cazwell may yet turn out to succeed, and with 13 tracks and 7 remixes he’s got just enough material to keep “Watch My Mouth” interesting. His album isn’t for everyone but it is for those with a sense of humor and a little bit of patience. I suspect if he improves as a writer and finds beats that are a little tighter, he’ll be more like what would happen if MC Paul Barman ate Eminem.