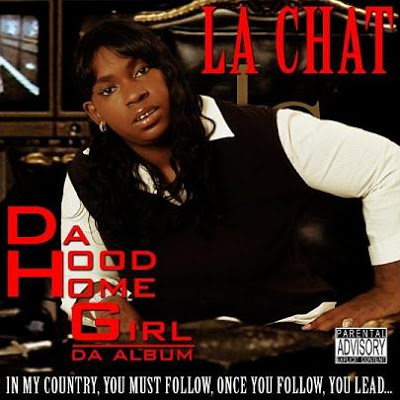 La Chat, AKA Chastity Daniels, has had a modicum of success on the southern hip hop circuit. She guested on Project Pat’s single “Chickenheads” and has appeared on a couple of soundtrack albums in addition to releasing three prior solo albums. According to her MySpace, she also won an award for Best Female Mixtape Artist at the Southern Entertainment Awards, if you can put much stock in that particular honor.

The press release for her latest album, “Da Hood Home Girl,” boasts that La Chat is not the kind of MC who raps about her Gucci shades or Prada bag, which immediately distinguishes her from not only most popular female rappers but many of their male counterparts as well. Unfortunately, not much else here really distinguishes her. It’s not entirely her fault, especially since she is backed by a veritable musical monotone, full of clichÃ©d southern effects, from the crisp 808 snares to the buzzing synth flourishes. The names responsible for the beats are not recognizable ones â€“ Lil Lody, K-Dubb, etc. â€“ but their sound is extremely familiar. If you’ve heard the T-Wayne masterpiece “Got Money,” you know the pattern. Just take that beat and subtract the catchiness and the (admittedly meager) variety, and you have an idea of the musical quality on display.

On the mic, La Chat is like your average southern rapper. By “average,” I don’t mean “typical” or “usual,” since that would imply some sort of slight to the region. I’m referring to the southern MCs who find themselves somewhere around the middle of the bell curve â€“ better than Webbie but not touching Andre 3000. Her subject matter mirrors that of male rappers almost exactly: the majority of the songs center on tough talk and “I’m better than you” braggadocio, with the occasional song about love, sex, clubbing, or holding the block down. For someone who dubs herself “the hardest female rapper,” the refusal to pigeonhole herself as a name brand-devouring sexpot is clearly a plus. On the other hand, rapping just like everyone else doesn’t exactly make you a compelling figure, and that’s the real flaw here.

The best moments come when the beats deviate, however slightly, from the tried and true formula. “Da Dope” rocks a repetitious yet hypnotic loop over a syrupy slow beat while Chat flows double time about the obvious topic. “Ride Wit Me” plops down a sample based track in the middle of the mix, using The Stylistics’ “You Are Everything” for the umpteenth time to surprisingly decent effect. The male rapper has a higher voice than La Chat, but otherwise the track succeeds in breaking up the stale mood. Gangsta Boo lends a hand on “Keep It Moving,” which is another high point despite (or perhaps because of?) the familiar sounding beat and T.I.-jocking hook of you-don’t-know-me-like-that’s. Murphy Lee drops the album’s best vocal performance on “Do Ya Dance,” and La Chat’s lyrics are entertaining as well as she reminisces about dance crazes of yore.

In the end, though, the few bright spots are just not enough, especially given how average even the best songs are. My husband is a math teacher who swears that most of his failing students are more than smart enough to pass but can’t get their act together for a variety of reasons. That’s how I feel about a lot of the albums I review negatively. There’s nothing about La Chat that makes her inherently inclined to produce a bad album. The elements just aren’t there. With boring beats, tired concepts, and average rhymes, “Da Hood Home Girl” is simply another mediocre effort from someone who probably has better in her.