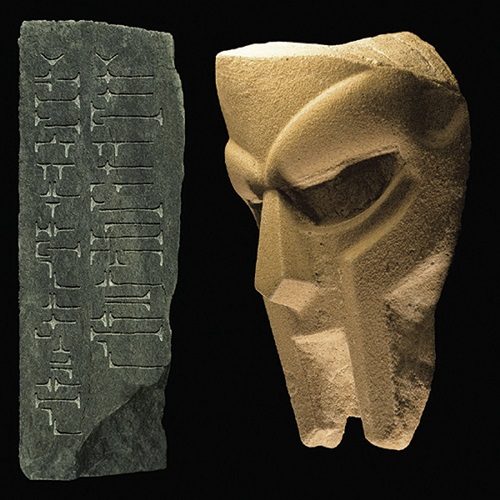 The Metal Face Villain is today what he has been for at least the last ten years running – a colorful enigma, a dead bent drunkard, a musical genius and an insane asylum escapee. That seemingly contradictory list of descriptives is only the tip of an iceberg deeper than the one that sunk the Titanic. Much like a fellow New Yorker named Keith Thornton who has a large cult following, Daniel Dumile operates under at least a half-dozen pseudonyms artistically and personally just to keep things interesting. These two men also share common ground in confounding the public by not revealing their artistic intentions – three albums in one year or one album in three years are both valid choices.

There are two fundamental points of divergence between these madmen though. The first thing that separates MF Doom (his most common moniker) from Kool Keith (likewise most frequent) is beats. Doom offers nothing but the choicest cuts on every project either through stellar self-production or collaborating with musicians like Madlib. Keith on the other hand is self-reliant to his own detriment, creating haywire electronic noise even his most ardent fans are hard-pressed to admire; worse yet he often sounds unmotivated on his own tracks and moreso than Doom NEEDS a collaborator like Kutmasta Kurt to truly bring out his best. The other key difference between the two is mainstream exposure. While both men are often content to hide behind masks both metaphorically and literally, Doom has broken outside the confines of his insanity by doing voicework for cartoons on [adult swim] and gained a following beyond the backpack rap set. It probably doesn’t hurt that many of Doom’s personas seem inspired by Marvel comic book characters, which is probably easier for the public to relate to than Keith’s tendency to rap about pornography and fecal matter. I appreciate both forms of self-expression but it’s not hard to see why one would crossover more than the other. MF now chooses to go by the shorter moniker Doom and shed the opening initials, but it’s hard to separate the Metal Face from the man when his iconic mask still appears on the cover of “Born Like This.” For less obvious reasons it’s easier for me to think of him with the MF attached anyway as there’s an obscure rap album which goes by the same one word title. You can think of him under any name you like though and it won’t matter one way or the other to Dumile. The artist himself has called “Born Like This” his definitive work, and by the third track “Ballskin” he’s making a good case for the truth of that statement. Jake One provides a fat beat for this short but action-packed rap.

“Not to call the whole crowd out
It’s just a few chumps, and you know who you are like a shoutout
Place ’em in your loud mouth and taste ’em like a pastry
Waste of space face hastily bow out gracefully
Disappear, reappear and disappear again
Villain knot his hair, he’s no afro-american
If that’s the case he be a bald-headed African
Takin all the credit and jetted, astro travellin
Turn a man into a mannequin for AFLAC’n
And bein tough actin Tinactin bluff jackin
He wears a mask so any dog’s his face
Each and every race, could absord the bass”

Doom breaks from his normal modus operandi on “Born Like This” and brings in a few unaffiliated (read: not fellow cartoon villain rappers or men who have MF initials) rappers to share the spotlight, most notably Wu-Tang members Raekwon and Ghostface on “Yessir!” and “Angelz” respectively. The former rocks a familiar but still dope sample of “UFO” while the latter is a typically ill Doom beat that’s much harder to pin down. The strings and horns are a little bit cinematic, a little bit AM radio soft rock, a little bit symphonic and all-around FRESH as are the rhymes of Ghost and Doom. When this track leaked before “Born Like This” many people mistakenly believed it was the opening salvo in a long-rumored collaboration album between the two New Yorkers, but even if this is a one shot it’s one sonic blast not to miss.

Ghost: “Aiyyo, it was three white bitches who worked for Tony Starks
Undercover agents, far beyond NARC’s
Amazed by their beauty marks
Wonder Woman bracelets, knee-high boots that was made by Clarks
My dick got hard on how they spoke and shit
Every language was music to the kid as if
I was modern day King Midas
Doreen, Skye and Kelly, Starky’s Angel’s – Shaolin’s Finest”

Doom: “Two brown sisters assisted the Villain Doom
He woked up stoked like they was still in the room
Freed his right arm and leg, it was more like a sweep
Released his other leg, arm, head and rose to his feet
Staggerin except for the socks and mask, naked
Threw on the boxers and searchin for the trio
Checkin for the keys, to go, a robbery expected
Yet nothin obvious is missin
Recollected now why Hollywood hotties stepped in Giuseppe’s
And naughty personal nurses, Chanel purses, CLK shotty”

For those not prevoiusly familiar with the MF Doom flow a brief primer would be “any fucking way he wants to flow is what the fuck he does.” Doom doesn’t really worry much about whether or not his rhymes fit into neatly spaced bars; despite that, he always follows the pace of the beat closely enough that he somehow sounds right on time whether ahead or behind. That sounds like horseshit unless you actually listen to him rap but it’s 100% true. Perhaps it’s best to think of Doom’s rap as the verbally pugilistic equivalent to Drunken Monkey technique. No matter how unbalanced or out of focus Doom might appear to be, the timing of his pop culture references and punchline jabs always connects with deadly force. Rapping to a beat provided courtesy Madlib, Doom once again proves the merit of his style in a mafioso style tale where absolute power corrupts “Absolutely.”

“Get bagged, you’re on your own, act it alone
Back home your fam’ll be provided for while you’re gone
It’s a price on all snitches
If you nice bring back eyes fingers toes and pictures
Send copies to those who singin the blues
Mothers and fathers who’s unjustly accused
Our species is in danger
Wear gloves and strike in a city where you a stranger
That’ll let them fools know
And send them a message, let them P.O.W.’s go
Absolute power corrupts absolutely
Now you have your orders, do your duty”

It’s no coincidence that “Born Like This” draws both title and inspiration from the life of Charles Bukowski, who can even be heard reading a bit of his poetry on the track “Cellz.” Bukowski was an unrepentant alcholic who wavered between craving attention and anti-social behavior seemingly designed to grant him isolation. Bukowski’s love/hate relationship with Los Angeles seems not unlike Doom’s relationship to New York city; perhaps to hip-hop itself. Doom goes from aggressively punching listeners in the ear with songs like “Batty Boyz” to flowing comfortably over self-produced violin bangers like “That’s That.” Indeed – that’s that. Dumile may have achieved a slightly larger degree of fame and notoriety than his previously New York cohort Thornton, but that comfortable margin only enables Doom to live comfortably. Doom’s not afraid to jump right back into underground anti-hero mode on tracks like “Supervillainz” with Kurious and Slug, a literal verbal reminder that Doom will only be mainstream for as long as he chooses to be.

It is more than a little difficult to render a decision on whether “Born Like This” is as definitive as Doom wants it to be. With so many classics in his catalogue already, this album is arguably not even his greatest to date, let alone his greatest to come. The short length of a large number of these songs doesn’t make it feel very definitive either. Nevertheless long-time MF Doom fans and relative newcomers to his innovative beats and flows will both be satisfied by this release. Like Bukowski’s poetry, Doom chooses to touch on humanity in his own way while keeping a somewhat healthy distance from it, and given how satisfying it is to enjoy his art that’s a distance we can all respect.