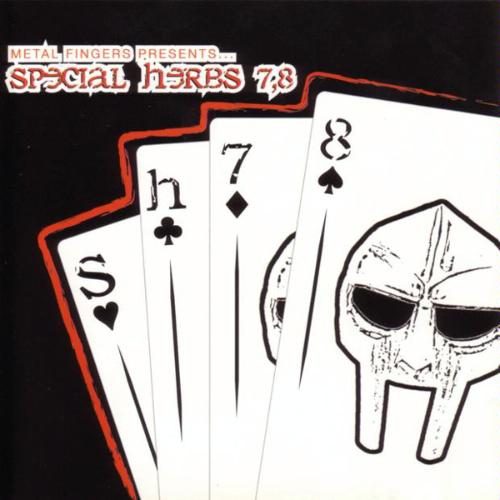 Given that these reviews are totally out of chronological order, feel free to bitch or complain (dj.flash@rapreviews.com) any time. In the Metal Fingers catalogue I reviewed 1 & 2 first, but then somehow skipped 3 & 4 and went straight to 5 & 6. I then skipped ahead AGAIN to 9 & 0 and only now am I coming back to 7 & 8. Not to worry, I do plan to do 3 & 4 eventually, but since that’s a few years old now it will probably be a Back to the Lab reviews. Since this set is just over a year old as of this writing I felt it was recent enough that I could still “squeeze it in” if I wrote it up before the end of 2005. Since it’s now December, there’s no time like the present to get cracking on it.

At thirteen tracks and forty-five minutes long, I’m having a hard time discerning exactly where “Volume 7” would have ended and “Volume 8” would have begun. Nevertheless in the case of Metal Fingers, our favorite demented producer who is also known as MF Doom or King Geedorah or any of a slew of other rap monikers depending on his mood, it doesn’t really matter if either “Volume” was seperate to begin with. On each of the other releases that I’ve reviewed to date there have been two common themes – they’re all instrumentals and they’re all tied to botanical references. How appropriate or fitting the names are varies wildly. For example I’m struck by the many different applications that are attributed to the plant naming his first track, “Safed Musli.” It’s promoters claim it to be everything from an immune booster to a safe and natural (possibly more potent) alternative to Viagra. Having no way to test the efficacy of these claims nor any idea which of them Metal Fingers had in mind when he chose the name, I’ll opt for the idea it somehow involved sex since most things ultimately do anyway. As such I’m struck by the fact it’s actually one of MF’s most impotent tracks. It has a dope lilting flute melody and accompanying to start, but then bogs down in it’s sheer repetitiveness with no variance – like a lover who only wants to do missionary over and over again. MF tries to add variety by speeding up and slowing down the beat and occasionally spiking it with a female vocal, but that only makes it more obvious just how uninteresting it really is.

Thankfully things do improve moving forward on tracks like the subtle and jazzy “Licrorice,” the blaxploitation meets Wild West funk groove of “Sarsaparilla” and the incredibly twisted “FO Ti.” Turning again to the internet to asses where MF is coming from on this botanical tip, I find that “fo-ti” is described chiefly as a laxative. Yup, you read that right – fo-ti gets shit flowing. I suppose that’s apt enough. Moving on to the more familiar sounding herbs, there’s the light and airy guitar melody of “Camphor,” which is good for a short period of time but then bogs down in the same kind of repetitiveness with overly intentional variance that “Safed Musli” exhibited. “High John” is an improvement though, as the split channel saxophone at the start sets the mood nicely and the acid trip sound is appropriate given that it’s said to cause hallucinogenic side effects when ingested (though the site I visited suggested not doing so because it was a VERY POWERFUL laxative – not a pleasant thought). “Mandrake” is positively fucking hilarious – if you don’t recognize the loop that Metal borrowed from to make this track, play it for a friend who’s ten years older and they will know right away. Despite being simplistic, it was easy to jam to this funky piano.

The album wraps up with a series of excellent instrumentals that soothe any of the ill effects the other herbs had. “Devil’s Shoestring” is so smooth in fact that it’s a shame Doom isn’t rapping over it – the variance of the rhythm guitar in the background and the volume in the foreground is a subtle but especially nice touch, and when a new melody comes in it’s like a long lost friend coming over for a much welcomed visit. “Wormwood” is some futuristic sci-fi boom bap that sounds like it should be a bumper break for [adult swim]. “Cedar” slaps it around like a funk junkie, but personally I prefer to skip ahead to the swanky “Buckeyes” and the closer “Chrysanthemum Flowers” – the latter is so mellow you almost can’t help but close your eyes and drift on memory bliss listening to it. While I wouldn’t say this is Metal Fingers strongest batch of herbs, it’s a potent bunch not worth missing.