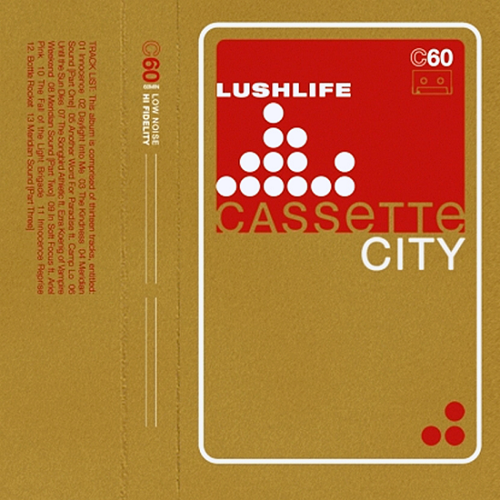 Lushlife is better known in Tokyo, Japan than his native Philadelphia land. His most famed masterpiece to date is a “West Sounds” mashup of albums by Kanye West and the Beach Boys, but he’s been making music for his entire life. Having spent 13 years being classically trained in piano, 7 years rocking the drums, and a lifetime dropping vinyl underneath needles, Lush knows more than a thing or two about what sounds good together. The only thing that Lush lacked in hip-hop was the confidence to flow over his own beats, but in 2009 it seems that Lushlife is ready to shine.

Having inked with !K7 subsidiary Rapster, Lushlife drops the airy and refreshing “Cassette City” with little regard for the mainstream despite making an album they’d adore. This is not an angry, bitter backpack rapper decrying pop commercialism to declare himself the realest in hip-hop. Lushlife combines the wit of Rhymefest, street smarts of Lupe Fiasco and pop sensibility of Mr. West into an entertaining and uncompromising LP. “The Songbird Athletic” opens with a light folksy guitar and evolves into up-tempo jazzy b-boy harmony guaranteed to please. “Bottle Rocket” bubbles and pops over pianos, “a breath of fresh air in your MP3.” He lives up to those words on the groovy “Daylight Into Me” too, namechecking all the desires of any poverty stricken rapper yet still coming off unobsessed with material wealth – only with rocking clubs at night.

“I don’t pass the time, I pass the peas like a pantomime
Rhyme with the trees and the phantom I’m
Ready for action, ready for shows
Ready for money, hoes and clothes and ready for flows
Aiyyo it’s Lushlife coated chrome
From Pleasantville to the Terrordome
My overseas fees got me never home alone
Without a reason to stand I’m gettin plenty C’s in advance
To keep on knockin knees in the dance, man”

Being relatively unknown even amongst hardcore hip-hop fans, Lushlife doesn’t have the pull to get a bevy of big names to guest appear on his album. That turns out to be a blessing in disguise as it gives Lush the room to expand on his own plan without having to tailor his beats to the flows of the cameos. The only notable names worth mentioning are Camp Lo on “Another World For Paradise” and they don’t slow Lush down one bit – if anything they seem a little pressed to keep pace with Lushlife. That’s not to say there aren’t other guests whatsoever, but fewer hip-hop heads will recognize the name Ariel Pink than do Lushlife on the track “In Soft Focus.”

“You want some pink champagne we can drizzle on ice
Give it a night, I do things you ain’t seen in your life
The way that I write, got hits comin off of my chest
And the rest is just a dream, you can live it unless
You wanna front like you want it, ma do it for real
What the deal? You wanna hit it or you playin the field?
Cause I ain’t got time to waste, got rhymes to lace
In the city full of chickens, I got time to baste”

The rhymes are cool enough, but its the jazzy melody and the overriding but not overpowering drums that take the track from a soft focus to a hard hip-hop banger. The “ohhhhs” will remind you of Kanye, but the O.C. samples will make you think Primo or Alchemist. Lushlife’s genius seems to be his ability to take the various New York hip-hop production styles and blend them into a style that’s all his own, unique yet instantly familiar. Living proof that critically acclaimed is not the same as being a household name, Lushlife’s “Cassette City” offers more than you bargained for from an unknown soon to be living as lush as his name.