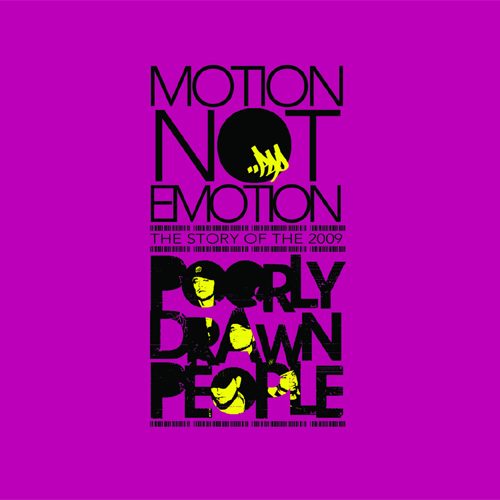 I want you to know the key facts that Poorly Drawn People pointed out to me in their press kit before this review even starts. Hey what can I say – I’m a generous guy – but I also thought that being a rap group from Rhode Island they could use all the help they could get. Oh sorry, that’s the first fact. The second is that this five man collective consists of Reason and Storm Davis on the mic, beats by Dox and Entity, and scratches by Sterbyrock. The third fact is that they’ve opened for everybody from LL Cool J to Sage Francis, which is certainly an impressively wide span of the hip-hop diaspora. The last fact is one I’ll throw in myself – we already know who they are. That whole introduction threw you right? Thought I was dogging them for being from the smallest state in the continental U.S.? Not at all. In fact PDP’s solo members have had several well-received releases, including Storm Davis’ “Kegstand Poetry for the Recovering Alcoholic.”

I’ll let you in on one other thing about Poorly Drawn People’s “Motion Not Emotion” before we get underway – this is NOT a concept album. PDP insists upon this fact. In no way did they intend a single theme, topic, cinematric real life portrayal or futuristic landscape for this album. They insist that the fact it has any sort of theme or concept whatsoever is a complete accident. I’ll accept that at face value, but if you’re an independent rap collective struggling in the economy of 2009, it’s not surprising that an ACCIDENTAL theme would emerge from their mutual suffering. That’s why you won’t be surprised to learn that “Motion Not Emotion” has songs with titles full of strife like “Stress Filled Days,” “Elmer’s Lament” and “Better Off Dead.” Yikes. I guess it’s hard to be a Rhode Islander. A Rhode Islandist. A Rhodie? I’m not really sure what R.I. natives call themselves. Ahh thank you Rhodepedia, turns out I was right the first time – Rhode Islander. Let’s see what these Rhode Islanders have to say about their “Stress Filled Days.”

“Make my way into the kitchen, feed the felines and piss
Then pour myself a cup of fuck this
Systematic shifts, I mean everybody does it
So I spend a couple hours as a puppet for the public
There’s nothing up above it, there’s no puppets here to covet
Gotta love it on a budget, that’s like pennies in the bucket
BLAH BLAH BLAH – he’s broke and depressed
About no dough make these days feel stressed
Work eat sleep sex rinse cycle and repeat
Six-two, 200, hit it ’til I’m obsolete”

Well I gotta give it up to PDP here – the topic matter was predictable but not the fact the group members would make fun of their own misery. Then again that sense of whimsy in their music was reflected in the Storm Davis solo album, so it’s not surprising that PDP as a whole make serious hip-hop without taking thesmselves too seriously. In fact one of the best songs on “Motion Not Emotion” is the piano laced “Ain’t Hard to Make a Million Dollars *” and if you read the fine print on the back cover the * reads “If All You Want to Do Is Make a Million Dollars.” The opening verse informs you that before rap the hustle of life resulted in “a cool quarter mill” before one PDP album was sold only to “squander every last red cent” in the process.

Money comes, money goes, but Poorly Drawn People are here to stay. The twelve track album seems to be over before it even started but there are plenty of highlights along the way. The lead single “Sawbucks & Fins” featuring Esh the Monolith has pounding drums and a very subtle yet still delicious bassline. “Go chase your ten dollars while I shape a generation” is the value set they espouse while taking much less subtle digs at the DipSet. “Celebrity Rehab” pokes fun at the 15 minutes of fame that B to D-list actors and musicians find in pop culture, name checking everyone from Liam Neeson to Bo Jackson to give them a little more shine. Remember “Better Off Dead” from earlier in the review? You won’t feel that way after listening to it; instead if you’ve ever been stuck in a bad relationship can relate to the words “I’m sad about a girl and it’s fucking annoying.” Word. PDP may be an encryption key, they may be a group of rapping Rhode Islanders, but either way they unlock a part of your musical subconscious that knows hip-hop can keep it real and keep it fresh without always having to keep it too serious.