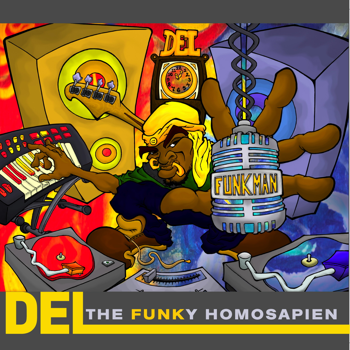 When you’re a long running underground legend fighting for relevance with a generation that lives by the next ring tone single and even the most dedicated of hip hop head is probably going to steal your record online, how do you garner the attention of the listening public? Even with something like four hundred mixtapes, constant MTV rotation, and more hype than the return of Christ, Lil Wayne still barely broke a million his first week with “Tha Carter III.” To this end the sad truth of rap these days is your record probably isn’t going to get you rich anymore. It ain’t the 90’s anymore and everyone but Puffy is burning those shiny suits to keep warm at night.

Del the Funky Homosapien is a prime example of the kind of artist who can either be made or broken by the ability to adapt to a constantly changing musical landscape. After eighteen plus years in the rap world Del’s tasted massive levels of success with Gorillaz, critical respect and a hipster cred with Deltron 3030, and got a music video about a stinky kid to get strong airplay on video stations. The guy could easily rest on his laurels, tour without releasing anything, and pull a pretty comfortable living for himself. But Del doesn’t do that. If the kids are going to steal your shit anyway you might as well just let them have the tunes and cut out the middleman while connecting with your fans.

To that end “Funk Man (The Stimulus Package)” joins the ranks of albums delivered for free to fans and laymen alike with the knowledge that giving something away for free is a guaranteed way to get people talking about you. Shit it worked for Radiohead and Saul Williams right? Del gets that even the respected sometimes need to send out a signal flare to remind the world they’re still around, and relevant. And “Funk Man” lights up the sky.

While his last record, 2008’s “11th Hour,” saw Del back to the happier goofy dude who wrote “If You Must” while still embracing his backpacking roots, on “Funk Man” it appears the Funky Homosapien has gotten hungry again. Radio thugs everywhere will feel a bit of sting on their cheek when they hear Del rip into them on “King of Fighters.”

“King O’ Fighters, bring on your bigmouths
Bring on your writers, they gone be workin overtime
Catchin arthritis, bring whoever do ya hooks, bring your choirs
Bring on your phony thugs they all liars
Makes no dif ta D, I’m on fire
Funk with it, go ‘head touch me, I’m beggin you”

Of course there is more than just bluster to these thirteen tracks, after all Del isn’t known as a particularly dark guy, but the record’s best moments appear when he starts getting real and unleashes his disgust at modern rappers chasing a hit instead of art. His attacks on auto tune abusers on “Straight From the Big Bad West Coast” don’t sound like someone trying to start beef with the likes of Kanye or Wayne, but a bummed dude who sees his art form being dumbed down.

“Take tha auto tune off, leave the gimmicks at home
You ain’t foolin nobody, dumb nigga it’s on
Lemme spit somethin for ’em
Let the homie twist somethin for ’em
Them Cali buds, ah ha now he feel the Cali love
Go ‘head, shit it’s on the house
Now relax and peep Cali got somethin for tha drought
Don’t get me wrong I salute the Bronx
I would never dare to do this art and dilute the content
Ever since I heard the phonics”

It may be far from a battle cry, but once again Del leaves listeners nodding their heads to his lyrics as much as the self-produced beats that make up 90% of the record. Those who worry things might get too heated can rest easy. The backbone of funk that’s always provided a light hearted production base for so many of his classics is still alive and well.

Actually it might be too alive and well. “Funk Man”‘s weaknesses are easy to pinpoint. Often the production feels too familiar for those who’ve followed him from “I Wish My Brother George Was Here” on. Considering the past levels of experimentation with sci-fi inspired samples and keys, the lack of any true surprises on the music front is simply disappointing. I know it’s unfair to expect a Prince Paul beat on each record, but the lack of weirdness outside of Del’s lyrics leaves this package feeling just a bit incomplete. Still his lyrics are in top form, and few rappers are so adept at spitting venom at the elements of the genre that bother them while still leaving a smile on their listener’s face. Even if I had to buy this with my own funds this purchase would be a no brainer. For free you’ve got no excuse not to check this out. The record can be downloaded at bandcamp.com.