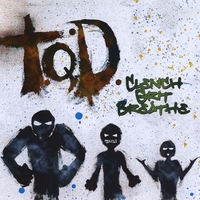 T.Q.D. stands for The Quiet Dude and The Quiet Dude is a member of the rap crew called Background Noise Crew. A few years back I had the pleasure of reviewing a CD from the Background Noise Crew and enjoyed their brand of traditional hip-hop. The crew was nothing groundbreaking, but they combined solid emceeing with entertaining beats. I recall T.Q.D. being one of the members of the group I did not vibe with as much as the others. The main reason for the dislike was the fact that T.Q.D. likes to drop abstract lyrics and I am not a big fan of that type of lyricism. In small doses T.Q.D. was not distracting, but over an entire album I have to say he is not as engaging. It’s a shame considering he is hooked up with some pretty banging production on “Clench, Grit, Breathe.”

T.Q.D. has a few things going for him as an emcee. His flow could use some refinement, but is not bad. His voice is solid and unique. He has the basics down well. T.Q.D. also has a good ear for hooks. Even if I don’t comprehend his intent on the hooks, most of the songs on “Clench, Grit, Breathe” possess good hooks and some are even catchy. T.Q.D.’s appeal is lost to me once he starts crafting his verses as time and time again I am at a loss as to what he is trying to convey. The first example comes on “Baby Boy” where he spits:

“Seventeen when it all went downstream
Melted off, dust too hot and sickening
Breathe in the air, leap into the chair
Reap all rewards as long as you care
Sit down for the upstroke, collapse and toke
Calm after the storm, now time to clear smoke and hope
Periscope now serving the coast
On cruise control with small regret at most
Eulogize yesterday afternoon, everyone
Tears for the end, but together we won”

I honestly couldn’t tell you what T.Q.D. is trying say with that verse and the hook provides little guidance as to the theme of the song:

The second verse finds T.Q.D. focusing his message more and you get an idea that this song is about his own birth and childhood, but the abstract lyricism threatens to ruin the message. T.Q.D.’s unfocused lyrics are what hinder what would be a solid album. Track after track is a mixture of dopeness and bad execution. In his verses it seems like T.Q.D. oscillates between moments of lucidity where his lyrics make perfect sense and then he slips into abstract lines that sound cool but say little. It’s quite frustrating for a listener as you try to get into T.Q.D.’s style and message but are constantly thwarted by confusion. “Second Fiddle” is one of the few songs where T.Q.D. manages to maintain focus for the majority of the track and manages to convey a compelling story about childhood.

T.Q.D.’s “Clench, Grit, Breathe” is as mixed as bags come. The production is good. Very good. It’s better than the production on the Background Noise Crew CD and maintains a high quality and variety throughout. I would even say the songs remain catchy and the hooks do their job quite well even when you don’t understand them. The main problem is that the album is one big muddled mess when it comes to focus and lyrics. T.Q.D. sounds capable at times of delivering his message while still leaving the message open for interpretation. That is the key to his style of rap. The problem is that T.Q.D. seems to lose focus too much and delves far too often into abstract rhymes for the sake of abstract rhymes. If he could make more music like “Speed Bump,” where he addresses the issue of rape in a clear manner, this album would come highly recommended. As it stands, I can’t recommend T.Q.D. unless you are really into abstract rhymes.