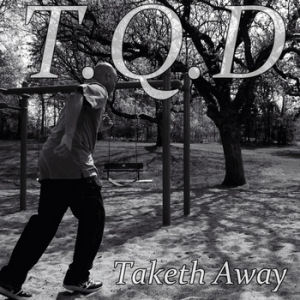 Minnesota born and raised T.Q.D has been active as a rap artist since the late 1990’s, but started to make noise as a soloist in the 2000’s with albums like “Not Yet” and “Clench, Grit, Breathe.” If nothing else you can say that he’s resilient and determined to succeed. Early RR reviews were somewhat harsh, yet arguably fair, in their assessment of his talent and abilities.Susan ‘susiQ’ Kim noted his debut showed plenty of potential yet observed “his lyricism is short of substance and cadence.” Pedro Hernandez gave solid marks for production, but noted that “the album is one big muddled mess when it comes to focus and lyrics.” If criticism can serve to make an artist evaluate and improve their output, it’s fair to say our writers gave T.Q.D one to grow on and then some.

“Taketh Away” suggests to me that he took away some good advice from this and other reviews. Songs like “Insomnia” don’t seem muddled or unfocused – he’s got a very good handle on the things which cause sleepless nights. Salt Lake City’s own Vividend produced the track, and both the beats and rhymes are harrowing. You get the sense a long night of tossing on the pillow was the perfect inspiration:

“Pretending ’til I’m awake
Ends must be made, time is the trade
Pretending ’til I’m awake
So much at stake, hang on ’til I break
Bring me up to speed, I can’t sleep
Out of my reach, now I’m on my feet
Still breeze, motions freeze, heat shivered
Lost and forgot, remembered to be delivered
[…]
No rest for the wicked, so I listen
Too many linchpins keep me liftin
Still on the clock, trying not to fall asleep
Cause the search is rough; this day I gotta keep”

Despite being 11 tracks in length, “Taketh Away” flies by fairly fast, clocking in at just one second over 32 minutes. This is another factoid that suggests T.Q.D took the idea of being “focused” to heart- he’s not wasting any time on expressing what he needs to say with his rhymes. “Liverpool’s Last Stand” might sound like the title of a British rapper’s football anthem, but it’s actually a song about a man who is hit in a car accident, forcing his wife to making medical decisions he’s not able to, then cope with her grief when he doesn’t survive. It’s a grim song to be sure, but the lyrics definitely evoke the mood and the moment like a short film that could be a drunk driving PSA. “Household Chemicals” sounds like it might be one from the title, but the meaning is more abstract. The impression I get is that it’s about someone dying of cancer, punctuated by the line “remission or bust,” but I freely admit this one is open to interpretation.

If you’re getting the impression “Taketh Away” is a fairly somber album, you’d be right. Even the press release accompanying this album describes T.Q.D’s latest work as “exploring grief, loss, and the general struggles of life.” If you were looking for a positive, bouncy, super happy fun ball experience “Taketh Away” certainly won’t provide it. And since the album tackles such dour topics, there’s a chance the mournful music could turn off some listeners. “Sign Language” is a rap song that sounds more like one of Everlast’s bluesy tracks, sans the gruff singing voice. “The Cremation” has even more sorrow – the instrumental could be a funeral dirge. Perhaps the closest thing to an upbeat song would be the jazzy horns and up-tempo drums of the song “Go Figure.” While T.Q.D still has some things to work on, including an occasional tendency to couch his points in too many layers of metaphor, I’d say “Taketh Away” shows the artistic growth past reviewers were looking for.