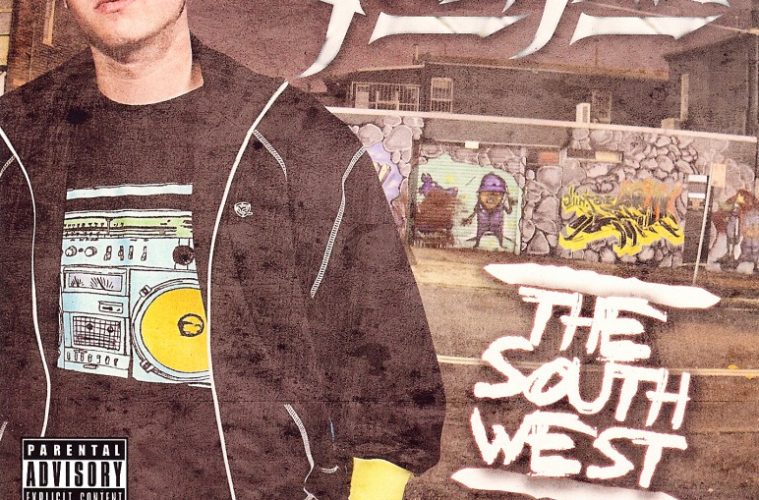 Here in Ohio, from where I write this entry, we do not hear a lot of west coast banger music unless it happens to get really popular and hits major airwaves. As Young Jawz says on “Classic,” he “gets back to the basics” with the dramatic bass heavy beats and gangster bravado lyrics. With “The Southwest” LP he hopes to launch his very own Prospect records to the forefront of the new west sound.

The San Diego-based emcee looks an awful lot like American Idol Kris Allen with a little bit of a hip-hop makeover.   Strange it is then that he comes off so aggressively on the mic.

Wisely the 20 year old rapper uses the first few tracks to introduce himself. He tries to convey his street roots on “Where I Been,” his love for hip-hop on “Classic” and his pimped out lifestyle on “How I’m Livin’.” Track two, “Classic,” is by far the most successful as he rides over entrancing keys and a pulsating bassline that fits perfectly with the California rap scene.

As we delve deeper in the disc, you come to the realization that Jawz sometimes abandons the vision of his album by seeking a single in the form of “She Wants It” or “Summer Love,” most notably. Both of these joints certainly feel like music for the ladies. The chorus of “She Wants It” comes complete with auto-tune, or some other voice distorting device, and an uptempo dance-inspired beat.

The tracks that will draw the most interest from potential consumers are those that have the big guest spots. “Bangin’ in the West” features honorary west coast star The Game with this solid verse:

“I’m a gangsta homey
You a wanxsta phony
I make it rain in Cali
Fuck Tony! Toni! Tone’!
You got guns come to Compton and show me
I sandwich niggas, this beef shit is bologna homey
I take your bitch make her come ride my pony
That’s genuine, I don’t give a fuck if she fat or bony
Long as she catwalk like Naomi
Or freak like Missy I take her to mid sixty
She a Cincinnati Red like Ken Griffey
Freckles on her face so I put a bezel on the chick
I’ll wife ya, and I don’t mean a wedding
I mean a free pair of G-Unit sneakers
Now she a video extra
Baby mama drama I’m starting to feel the pressure
My son seen me walk in the house with Smith & Wesson
School of hard knocks son this is a black vest
And you need this when you gangbanging in the West…”

This seemingly dated verse from The Game is stronger than both Jawz and his other guest Big Chunks. It remains one of the best cuts on the album.

He clashes with another rap heavyweight, or at least middleweight, when he meets up with Houston’s leprechaun Lil’ Flip on the mandatory money glorifying anthem entitled “Stackin’ Bread.” While the track falls short of the aforementioned The Game joint, it does showcase Jawz’ skills better than most because of it’s uptempo approach. The horns and fast-paced snares evoke this verse from Young Jawz:

The line where Young Jawz calls himself the Paul Wall of the west is actually quite apt. Similarly, he gets by with production heavy tracks and very direct lyrics, occasionally throwing in some interesting phrasing and refrences. His delivery is usually slow and deliberate.

As with “Bangin’ In the West,” it seems that Young Jawz finds his groove on the hardcore thumpers which perpetuate the album through it’s closing stages between “Step to This,” “It’s Like That” and “We Won’t Stop.” Here he endures by offering music that is indicative of his personality.  It will not necessarily blow your mind, but at least they seem far more fitting than some of the meager attempts at commercial accessibility.

It’s nice to be exposed to some of what the young west coast talent has to offer. Young Jawz is an ambitious emcee/entrepreneur that hopes to strike it big with the new release “The Southwest.” Unfortunately he has some tweaking to do in order to be a formidable force in the game. He needs to stick to what he knows best, which are those gritty and grimy bangers and then keep his music consistent throughout.