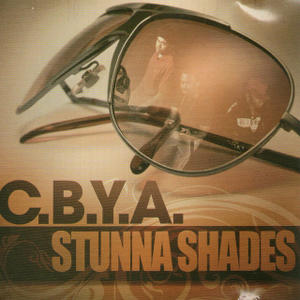 Intelligent, subtle, and well-crafted ‘floss,’ club, or party music is hard to come by, mostly because to be intelligent, subtle, and well-crafted, this music at least needs a pretense to something higher than mindlessness and danceability. Yes, ‘mindlessness’ sometimes works, but that’s misleading –focused mindlessness, which is intentional, not arbitrary, nor a reflection of the artist’s brain, is careful, even witty, and helps sustain a mood. Think M.I.A.’s better tracks, Kalri$ssian’s here, or even older commercial songs by Jay-Z and Ras Kass. Thus, I am not immediately turned off by any genre, but low expectations, if consistently met, allow some rationale for ignoring it. That said, club rap, particularly from the South, is the genre, and C.B.Y.A. the rationale.

“Stunna Shades” is the first (and titular) track. It includes the same faux-dramatic keyboard ‘flutes,’ the year shout-out, the friend shout-outs, the ambiguous claims for talent and/or cash (‘You gotta do it X2, man!’), and the title, all part of an elaborately generic introduction, executed within the first 25 seconds. Of course, the chorus hooks the title in refrain. It all – lyrics, flows, and ideas – aspires to nothing, even though the production has an ‘epic’ pretense, including metallic rings and serious, enthusiastic voices. At least Lil’ Jon is identifiable by his interjections. But, it’s danceable. That’s the point here, even though it’s not the point of quality, merely a prerequisite for club rap, which ranges from awful to great with that prerequisite intact.

“Wasted” is the next track. A heavy metallic bass alongside shouts of ‘To-ga!’ is an interesting, unconventional start, but the production soon degenerates into the expected synthesizers and drums, while the rappers into dull party-esque flows. Of course, the lyrics are about alcohol, but instead of being funny, clever, or anything, really, like Louis Logic’s hidden track on “Sin-O-Matic,” on the same subject, which could have went in the same direction, it’s just noise. And, as noise, it doesn’t warrant more than 1 or 2 listens.

As it is, there’s nothing dismal about C.B.Y.A.; they’re just mediocre, from any artistic standpoint. I suspect with some polish, the mediocrity can be improved, but for genuine quality, C.B.Y.A. need to overhaul their entire sound and approach to club music.