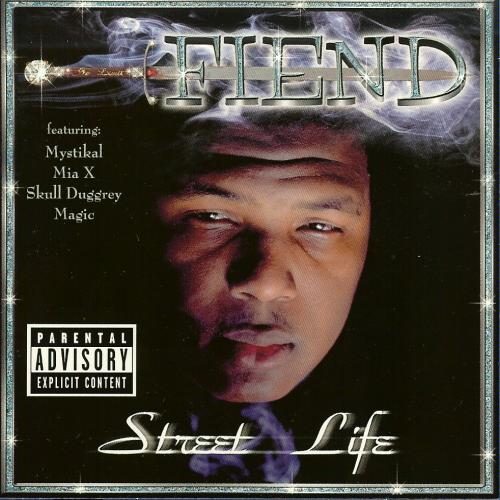 A few weeks after I graduated from high school, one of my homeboys picked me up and we went out on a joyride. He always seemed to have access to his uncle’s souped-up van and we’d ride around the neighborhood blasting the latest music to hit the streets. In this instance, we rode out to the new Fiend album which he somehow had copped three days before the street date. That was a different time, a time where getting an album early was a badge of honor and distinction. Nowadays, it seems like it’s all about downloading the album weeks before it’s available in physical form…but I digress. “Street Life” was released towards the peak of No Limit’s domination, but somehow got lost in the shuffle of what seemed like monthly, if not weekly No Limit releases.

“Street Life” opens with the title track, which comes off more like a piece of spoken word poetry, rather than the introduction to what most would classify as a gangsta rap. “The Rock Show” is actually the first song I heard, and I was instantly drawn into its trumpeting fanfare, sonic loops, and sporadic piano melodies. It all ends too soon, luckily for the listener, it leads right into another stellar short song, “Talk It How I Bring It”. Four tracks into the album, and the production becomes a bit slower in tempo, allowing Fiend to slow down his flow while still retaining the same force on “War 4 Reason”. While it goes without saying that capital F-I can hold his own on faster tracks with the likes of Mystikal on “Ak’n Bad” and Mia X on “Get In 2 It”, it is the slower songs that allow Fiend to inject (pun intended) a deeper sense of emotion into his music. One of the best examples of this comes on “Heart Of A Ghetto Boy” as Fiend raps:

“My people screamed for revenge
So Fiend was called upon
Job description was get it on
Protect your mental, heart and your dome
You may die ’cause of your tone…young, black and strong
I was meant and sent, because some of the real was all gone
Since birth until now, I got holes in my t-shirt
From fighting with anybody that wants to see me hurt
Took it needle and blood, second and first love
Fuck givin’ a fuck, blame me not the drugs
I…motivates myself, grab a rocket off my shelf
An extra match and now I’m feeling like myself
Without help, I could spot and just kill a decoy
Really end what I destroy”

Things pick back up with “Trip to London” and “Been Thru It All” which features long-time fellow No Limit soldier, Magic. The production on this song strays a bit from the traditional Beats By The Pound sound as it relies almost solely on drums and guitar riffs. However, Fiend and Magic find no fault with it as they go back and forth trading old war stories. There’s even time to pick up a lucky young lady on “The Truth Is”. A scratched in sample of a line from Fiend’s “The Streets Ain’t Safe” from his previous album helps to get the point across on “I Was Placed Here” as Fiend raps:

“I was dropped off in the ghetto, told to survive the best way I can
How this young black male, gon’ teach himself to be a man
I heard my kind was killed by the Klan
But that ain’t in my plan
I’ll be damned if they gon’ stop what’s grand
Look, I spark to let my inner thoughts get carried away
For every child that’s born, somebody got buried that day
Holloway dawg, if I ain’t really know no better
I’d swear my life was measured, and it’s slowly getting severed
And it feels like ‘I don’t even know my life no more’
So when I live like, I don’t know right no more
[…]
I got scrapes and bruises, and my eyes are plenty damp
From the insincere, too near to my real camp
I’m amped, disgusted, just ready to say fuck it
You know what partner, go ‘head and turn around this Cutlass”

The final third of the album features standout tracks like the Creole-seasoned “Walk That Line” and “Mr. Whomp Whomp”, which has certainly damaged its fair share of car trunks over the years with its thumping bass line. Although there are a few notable names that make guest appearances, Fiend largely handles the album on his own. Conspicuously absent from the album is any rapper whose full government name ends with Miller. “Street Life” closes out with “Waiting On God”, another slower, vivid, and emotional track, as Fiend raps:

“At thirteen, they know their right from wrongs
that’s why I write these songs for ’em
To let the ghetto children know that Fiend gon’ speak for em
I can’t ignore ’em, if my eyes were sewn shut
And my ears were overstuffed with words like, boy I don’t give a..
I’m not the recipe, just recognizing when he blessing me
And know my gun won’t solve, every time he testing me
Until the death of me, I continue on this legacy
Got a bad temper, but won’t let it get the best of me
Stressing me, I know we wasn’t put here to sell rocks
Be caught up in the system, locked in cell blocks
I think the world [is] shell shocked, and these streets is Vietnam
And the dopest thing I did was, put it in this rhyme”

After the release of this album, Fiend departed from No Limit, and spent a few years with Ruff Ryders, but he never released an album with them. He went on to start his own label Fiend Entertainment, which he still records under now. Always staying active, Fiend has also done work as a producer, some of his latest work can be heard on Jadakiss’ recent “The Last Kiss”. As for “Street Life”, ten years have gone by and the album still remains in my heavy rotation, and will be for a long time to come.