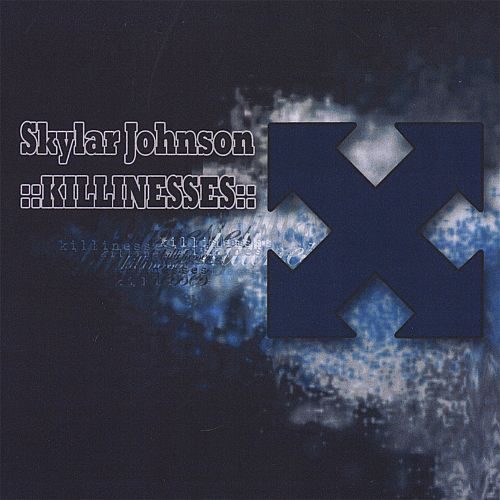 A+9 Records is a fledgling label with about a half dozen signees and twice as many releases to date, but odds are this Skylar Johnson review will be your first exposure to the roster. Before continuing with Johnson’s debut album “Killinesses” though, we need to address the slogan emblazoned on his record label’s website: “the official site of underground hip hop.” If you’ve seen those words in that combination before, odds are you you saw it at UGHH.com, a website that’s been around for at least 12 years now. I’ve personally placed many orders with UGHH for hard-to-find or obscure hip-hop albums. Give A+9 Records credit for having the moxie to make such a bold statement, but at the same time, call a bite for what it is when you see it. My suggestion would be that they change it post-haste.

Skylar Johnson hails from the mean streets of Cedar Falls, Iowa. Alright I confess I used the last sentence just for a cheap laugh, and I apologize, but it’s absolutely true. Johnson makes no bones about it, because like many aspiring rappers who come from non-traditional rap cities, he’s had to learn the same DIY ethic that launched the hip-hop revolution over 30 years ago. I’m not saying Johnson is the only hip-hop artist in his town but considering he wrote, produced andSCRATCHED on his entire album save for one song (“Marijuana Revolutions”) co-credited to guest rapper Aeon Grey he might as well be. There’s nobody to help Johnson on “Killinesses,” and honestly he doesn’t need it, because your preconceived notions of what a rapper from Iowa is like can easily be shattered by tracks like “A Longer Lunch”:

“I work for the man, his name is Scott
He ain’t a jerk, but it’s work, and its name’s on my shirt
It’s a shame, the way the world works
Made a slave, or make a slave hurt
Ain’t nuttin changed dirt – still needs shovelin
And my boots are made for puddlin
We made this concrete jungle gym
for nothin but a shirt…
Like I said, here’s some dirt, you start mutterin
Back to work, overtime start doublin
Break time only give you back trouble ‘n
you ain’t sick unless you hack off a body limb”

Even before a word of Johnson’s opening verse is spoken, the scratchy needle pop of the warm and inviting jazz break loop is right on the money. Cleaned up it would be useless – the dirty sound Ice-T one described as “fried chicken” fits this song like a pair of work gloves. The beautiful bassline carries you all the way to the dramatic chorus, which whistles and howls to sound a common complaint – we’d all like to hit that snooze button just one more time. This is Skylar Johnson at his best, sounding universal themes any listener can relate to over his own gritty beats, delivering rhymes in a no-nonsense manner that’s reminiscent of other midwest acts like Brother Ali and Atmosphere. Unfortunately a dark cloud lingers over the horizon, visible just over the tops of the corn that’s soon to be as high as an elephant’s eye. When that thunderstorm hits, it brings a rain that’s Everlasting, and even though Johnson’s no Whitey Ford listening to him croon makes me want to sing the blues on “My Own Misery.”

“And I wonder if I’VE done enough
FOR what I’ve done won’t save you from
What I’ve become, oh come to me
Before I fall, into, my own, mi-suh-reeeeeee”

As a rapper Johnson is well suited to flowing over his own beats, but as a singer he’s quite possibly worse than Guru from GangStarr. He commits this sin several times throughout “Killinesses,” most notably on “Will the Circle Be Unbroken,” a song that unfortunately lives up to its title by being nearly six minutes long. Just when you think the song is about to mercifully end at the four minute mark, a folksy guitar goes into a solo, and soon enough we hear Johnson crooning for the Lord again. I recognize that the lyrics and presentation have deeply gospel roots for over 100 years, but with all apologies to Johnson, leave it to the gospel singers who can do it best.

Fortunately for Johnson there is more to like than hate on “Killinesses,” an album which on the whole was a pleasant surprise. Johnson is lyrically adept and slyly self-deprecating when he notes that “behind the modem tone and corroded dome/breathes a real human heart beatin’ a wardrum/with a half-assed sense of rhythm.” The humble and earnestly eager aspirations of Johnson pay off on tracks like the funky slapping bass of “Transform,” the somber strings of “New Jack’s Same Jill” and the T La Rock hip-hop salute of “And the Beat Goes On” dedicated to those who can’t be here. I think Johnson has a world of potential as both a producer and MC, and with no pun intended since he had to be his own DJ, “Killinesses” just scratches the surface.