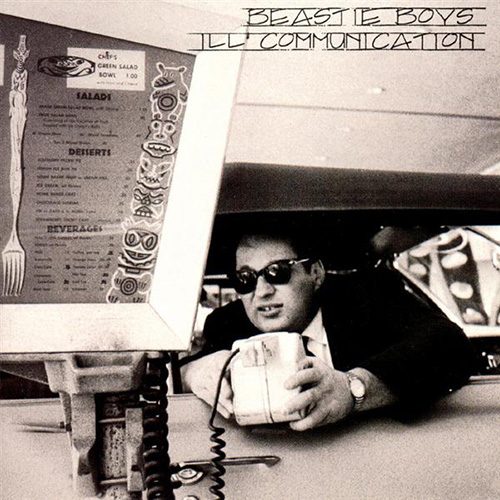 Ahh yes indeed it’s fun time. For three straight albums, the Beastie Boys established themselves as a presence in hip-hop. 1986’s “Licensed to Ill” put them on the map as the quintessential partygoers of rap. 1989’s “Paul’s Botique” redefined them as demented and dusted b-boys serious about their hip-hop craft. 1992’s “Check Your Head” split the difference between the two and mixed in a little rock’n’roll for good measure. 1994 was left wide open as a result, with the Beastie Boys able to go in any direction they pleased, and an already sizable cult following that would follow wherever they went. That’s the kind of enviable position most rappers spend an entire career trying to get to, and the Boys from NYC got there in less than 10. Even if “Ill Communication” bombed, they had little to nothing to worry about.

Beastie Boys fans had even LESS to worry about though, because “Ill Communication” was far from a bomb – unless you mean that it blew up on Billboard. In fact the Boys made explosive noise with the single “Sabotage” before “Ill Communication” even made its way into stores. The song took all of the influences that made up the career of the Boys thus far and melded them into one high-energy whole. Ad-Rock’s guitar playing sets the tempo at the beginning, Mike D joins in as the funky drummer, and the whole thing builds up for the first fifteen seconds until rage takes over and a primal guttural scream pierces the riff: “AHHHHHHHHHI can’t stand it, I know you planned it/I’ma set it straight, this Watergate!” One could easily mistake the track for a Rage Against the Machine song for all of the right reasons. Thanks to the hard bass playing of MCA, the scratches of DJ Hurricane on the chorus, and an intense music video direct by Spike Jonze that played like a three minute John Woo video, the song was EVERYWHERE. To this day it’s one of their best known songs… although I always preferred their next single, a duet with Q-Tip entitled “Get it Together”:

Ad-Rock: “Nowwww, I’m Ad-Rock and I shock and I tick and I tock
and I can’t stop with my body rock!
See I got heart like John Starks, hittin mad spots
Pass me the mic and I’ll be rockin the whole park”

The song is a lighthearted lyrical funfest full of comedic moments over an early 1990’s boom bap beat with a sizzling bassline that keeps you headnodding; that is when you’re not laughing at shit like Q-Tip interrupting the chorus to declare “phone is ringin – oh my God,” Ad-Rock declaring “she’s the cheese and I’m the macaroni” and Mike D professing to have “the kung-fu grip behind green my trap kit.” There’s few better Beastie Boys tracks when it comes to “funk for your derriere” and to this day I still think the album’s name comes from Tip’s profession at the song’s end: “Like Ma Bell, I got the ill communication!”

These New York borough representatives were far from done with that one-two combo. “Ill Communication” also featured “Sure Shot,” and those of you familiar with the album will have recognized the quote from it that opened this review. Perhaps no lyric is more apt for this album, because it does indeed have MAD HITS throughout. Even songs that didn’t wind up being released as singles still made mad noise and keep this album a worthwhile gem to have in your collection. “Heart Attack Man” is an unexpected but pleasant throwback to the early days when the Beasties were a punk rock group. The “Bodhisattva Vow” track is a surprisingly heartfelt profession of MCA’s Buddhist faith (and proceeds from the track were donated to the Free Tibet movement). Instrumental funk jams like “Sabrosa” and “Ricky’s Theme” were arguably the best to date of the Beastie Boys career, showing they had matured just as much as musicians as they had lyricists.

On the whole “Ill Communication” comes off as one of the most fun albums of the entire Beastie Boys catalogue. You literally feel how at ease these B’s are when jamming to tracks like “Flute Loop” and “B-Boys Makin’ with the Freak Freak,” and as a result you get into the groove and mellow out to. Even long-time friend Biz Markie makes a cameo on “Do It” and slides perfectly into their brand of mellow funk with his almost sloppy over-the-top delivery on the chorus. While this album can’t top the intricate production techniques of “Paul’s Botique” or the raucous and anthemic raps of their debut album, you should be ashamed of yourself if you say you’re a Beastie Boys fan and don’t have a copy of this album.