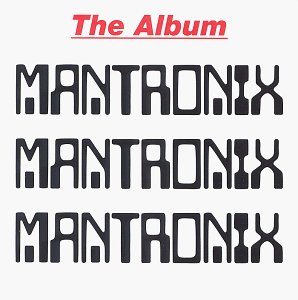 From the beginning Mantronix had a diverse pedigree. Producer/DJ Kurtis “Mantronik” El Khaleel was born in Jamaica, raised in Canada, and transplanted to New York City, where he worked as an in-store dj for a Manhattan record store. It was in this record store, some twenty-five years ago, that he met Haitian-born, Brooklyn-raised Toure Embden, aka MC Tee, a music fan looking to make some noise of his own. Their first collaboration, “Fresh Is the Word,” got them signed to Sleeping Bag Records, and made it to #16 on Billboard’s dance charts. It’s fitting that their single made the dance charts, because their music incorporated some of the sounds and rhythms of early techno and electronic dance music, as well as electro.

“Fresh Is the Word” starts off with handclap beats from a drum machine with MC Tee singing, before going into a stripped down beat composed of bass, handclaps, and cowbell as recreated by a trusty Roland TR-808. For five solid minutes, MC Tee goes off, spitting hardcore b-boy hip hop. His rhymes are a combination of feel-good party rap and braggadocio, all done so quickly that you barely have time to absorb one line before the other hits you. They rhymed couplets and simple metaphors may be old-fashioned, but MC Tee was cutting edge for his time, and his mellow timbre and confident boasting still sound good today.

The true power of Mantronix is revealed on “Hardcore Hip-Hop.” It comes at you like a megaton bomb, a brutal assault of noisy beats and synthesized horns that would make Public Enemy proud, and would evolve into El-P’s dystopian, funcrushed beats. It’s robot music that is miles away from James Brown or Chic samples, and much more complicated than the more rudimentary beats of contemporaries like Run DMC and L.L. Cool J. Clearly, Mantronix was working on another level from the straightforward boom-bap of the time.

The complexity of the beats is even more amazing when you consider that Mantronik was working with old Roland drum machines like the TR-606, TB-303, and the famous TR-808, whose kick drum sound has becomes synonymous with bass. Mantronik was a master of these old machines, but to my jaded modern ears, it sounds like he’s playing a washing machine or wrestling industrial equipment. There is an awkwardness and clunkiness to the beats, and they lurch along with all the finesse of a Model T.  This is solely an issue of technology, not Mantronik’s abilities as a DJ. He did the best he could with the materials at hand, but it’s impossible to listen to this today and not notice the technological limitations.

“Ladies” tries for a smoother, more female-friendly vibe that isn’t nearly as interesting as the rest of the album, and “Mega-mix” is an album-filling remix typical of the era. The stuttering mixing may have been amazing twenty-five years ago, but it’s not so impressive in 2009. The album ends with the single “Needle to the Groove,” another classic old school hip hop jam whose robotic “two turntables and a microphone” was famously sampled by Beck on “Where It’s At.” Mantronix have also been sampled and gotten shoutouts from artists like DJ Jazzy Jeff, the Beastie Boys, Deltron 3030, and the Black Eyed Peas (pre-Fergie). The fact that so many artists reference Mantronix is a testament to their influence.

Mantronix self-titled debut is a masterpiece of old school hip hop, and a must-own for any fan of early rap music. Time hasn’t been entirely kind to the album, and both the beats and rhymes sound dated compared to contemporary music. Still, there are some powerful songs here that are worth putting on the next time you want to make some noise. Think of “Mantronix-The Album” as the original Super Mario Brothers.: both were state-of-the-art when they were released in 1985, both were made on ancient equipment that has been far surpassed today, but both are still a hell of a lot of fun.