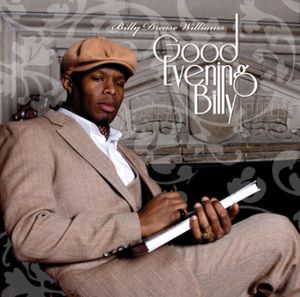 It only seems fitting to have the birth name, Edreys, which means “one who writes.” Incorporating his namesake into his part of his stage name, “Drease,” Billy Drease Williams embodies his destiny as a writer. Growing up in Buffalo, New York, Williams took on rhyming and has been doing so for more than ten years. A new talent to the rap industry, Williams has been named “one of the most promising artists in our region” by The Buffalo News while recently participating in the 2008 Van’s Warped Tour and featured in the North by Northeast music festival in Toronto. In his debut, Williams attempts to bring it all to the table while tackling some rather intense topics while incorporating a soulful, jazzy feel to “Good Evening Billy.”

Williams attempts to spread consciousness and awareness through his music by instilling a positive message to his audience while providing a glimpse into his own character. “Purple” is a hard hitting, bass ridden track that delves deep into his life of facing adversity in his hometown of Buffalo. As he exposes the reality of it all, Williams describes the ongoing crime and violence that has flourished and almost ridicules the aggressors as he says, “Another homicide, they even try to kill time.” Williams’ attention quickly deviates towards his own political stand as he depicts the government and judicial system as corrupt with his examples of the lack of justice for the destitute and the idea of “Big Brother.” He goes even further to address the money wasted in NASA as shuttles have proven unsuccessful and explains that “jails ain’t reforming, they’re just creating more thugs.” Ultimately, he makes it apparent that everyone should take on responsibility and be more attentive to their surrounding chaos as he says:

“Get Free” is another track that reveals Williams’ opinions on society. He explains it almost metaphorically as though we are all chained up and bound by ideas we do not agree with, but are forced to conform nonetheless. Williams has no shame in discussing the lack of understanding from the government and church while providing the idea that Martin Luther King, Jr. and Malcolm X’s death should not be taken in vain. He even goes as far as to refer to Al Sharpton as “a Martian” because he has blamed rap, but William shows “I’ll throw the blame back.” Also, Williams shows how everyone needs to be free of jealousy and greed in order to “get free.”

Williams’ efforts to instill knowledge to his audience continue as he provides a positive outlook in life. The old school hip hop beat on “Be a Star” sets the tone for the track as Williams explains his ongoing journey of becoming successful artist. He exposes himself as artist while showing the ups and downs of the business, but in the end, establishes the idea that the obstacles that surround you only make you stronger and that everyone is capable of achievement.

With Williams’ high strung political views and antagonistic beliefs towards the government, it’s nice to hear something a little more lighthearted and fun for a change as his creativity is heightened to another level. He manages to incorporate some humor and sarcasm as the highlight of “Good Evening Billy” has to be “How Ironic.” A piano commences the track as his storytelling talents shine. Introducing different stories related to irony, Williams begins by telling a tale of how one’s luxuries can cause tragedy as he shows how a person drives a fancy car and peers out to those who are without transportation, but is ultimately saved by those walking on foot after an accident occurs. He continues with another story of a teenage girl who gets pregnant and on her own, decides to have an abortion, but as she goes to the clinic she is in for another surprise-seeing her mother there as well. On his last message, Williams includes a poignant story of two best friends who in the end, find out they have shared the same father after all this time.

“Good Evening Billy” provides a clear glimpse as to what is to be expected with Williams’ full length album, “Good Evening Amy.” Williams’ talents are apparent as his creativity is seemingly unmatched. I appreciate his willingness to explore his musical and production talents while utilizing new beats with less sampling. Although his lyrics are definitely solid, the production lacks in certain areas at times. Many beats seemed to sound uncut and rough while sounding too simple. I always like a classic beat, but would like to have heard more depth and variation in sound. With a perfect beat, Williams is destined to have something great in the future as this is just the beginning of his artistry.