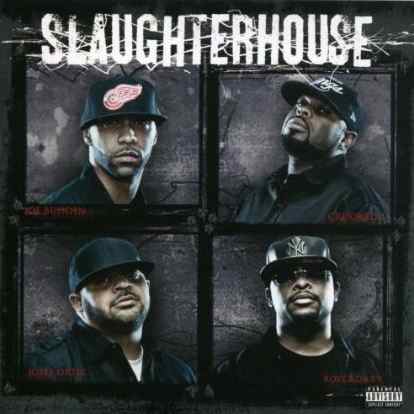 “Lyrical murderer, blame Rakim
I’m a sniper shootin my way into your lame top ten
Pistol at your head if I ain’t next to Eminem
Then I bust in your face like Lil’ Kim
Niggaz better pray to the lyrical Lord
that I fall off like the umbilical cord before I fill up the morgue
This is how a killer record
with the double-edged triple syllable sword, I’m iller than all
Dineri, seem I’m a literary genius
Bury niggaz with words, a cemetery linguist
Most rappers are comedy gold
They like they boyfriend’s sodomy hole, they full of SHIT!”

Parental advisory – driving around while listening to the self-titled Slaughterhouse album can be dangerous to your health. Possible symptoms include swerving uncontrollably due to spontaneous mirth and wrapping your shit around a telephone pole due to tears of laughter blinding your vision. The fearsome foursome of Joe Budden, Crooked I, Royce Da 5’9″ and Joell Ortiz aren’t playing around on their self-titled debut. They mean it quite literally when they say this is a Slaughterhouse, because people are going to wind up dead from listening to this album. If the side-splitting punchlines of the above quoted “Lyrical Murderers” don’t do you in, the pounding bassline and heavy hitting black piano keys will have your head nodding so hard that it snaps and rolls off your shoulders. Give TheRealFocus… the respect he’s due, and make sure you’re wearing a neck brace when you do.

The formation of the Slaughterhouse crew is either a happy accident, intelligent design or the best of both. They first appeared together at the same time on one track on a Joe Budden album, and the chemistry was immediately apparent. All four men have a cult following on the internet among rap’s most discerning fans, but seem to have a hard time translating that love into the kind of major label distribution and big number of units sold that they’d like. Forming a supergroup was the ultimate FUCK YOU to their naysayers and doubters. If you won’t buy any of our individual albums, just TRY to deny four superstars all rocking at one time, top notch rappers who vow to “kill your career with one word” if you think you’ve got more lyrical ammo. How many rappers do you know who will brag “If you are what you eat, HOW COME I’M NOT PUSSY?” With punchlines taken to Chino XL levels of viciousness and beats to match, Slaughterhouse is so far ahead of the game that even the pre-release singles they leaked aren’t dope enough to make the cut here. Take Royce’s word for it when you hear his rapid-fire flow on “Onslaught 2”:

“My niggaz is dimes, my bitches is dimes
I came up behind Eminen in 99 and I took the baton
I been runnin shit every since then, slaughtered MC’s
Sittin watchin my green grow, like I’m waterin seeds
The problem with me is I’m the heart of the streets
Niggaz callin for beats, they can’t even call the police
If I ain’t better than you I’m harder to beat
Probably cause I live by the art of for-keeps
I get indicted after my product’s released
We a different form, a different centrifugal force
Every line is like grippin on a stick shift in a Porsche
My niggaz asked for direction to go on this track
I said FUCK A DIRECTION, spazz out!”

Coming into “Slaughterhouse” I wanted to be skeptical, and think that even hot shit on the internet didn’t make for a hot album. The Slaughterhouse crew upped the ante at every turn though, and some of these tracks were recorded so close to release date that there are R.I.P. Michael Jackson references. Did they literally LIVE in the studio making gems? You might think so. They had to have lived, breathed, eaten and shit hip-hop to come up with this abattoir of awesomeness. I’d like to be able to pick out songs to criticize on this fifteen track promo copy, but I’m struggling for something to complain about. MAYBE the beat on “Microphone” by The Alchemist could have been a little hotter, and when the only joint you can even consider picking on is an Alchemist track, that’s a statement in itself. Playing this album at random is just as good as playing it straight through. I hit the button and land on “Pray (It’s a Shame)” and fall in love. RealSon pours heartfelt soul into the track, and the crew all rap about their personal struggle to overcome the obstacles in life: “Growin’ up in the hood’ll leave your mind baffled/We put haters in the past like time travel/That’s my murder story, I’m past purgatory/I need prayer though, Joey put a word in for me.”

It’s easy to tout albums as “the must-own summer release” or “potentially the best of the year” or any number of cliches that get used in hip-hop, but Slaughterhouse is figuratively and literally “Cuckoo” about their hip-hop craft – as quick to say fuck you as they are to say fuck a hook, yet entirely capable of making a hardcore rap song feel like a crossover track on “Not Tonight” to hook the mainstream. Guest rappers aren’t really necessary on an album where every member of the crew is someone you’d use as a guest star in their own right, but Pharoahe Monch still shows up on “Salute” anyway, while Melanie Rutherford and C. Brown are on the stormy Emile produced “Killaz.” So after 15 tracks of relentless rap warfare, what’s left to say? Well, they could have skipped the skits. That’s about it. Still Joe Budden can’t even let up on the album’s last track, so who can really complain?

“I disagreed with my shadow when he got on Twitter
Don’t like being followed so I shot that nigga
A known loner; that’s backwards
I’m a loner that’s known to attempt to put a comber in a coma
You lookin at the prime suspect, with enough stress
If you can give a FLUCK, I can give a FLUCK less”

Whether you want to doubt it or not, there’s just too much right about the self-titled Slaughterhouse for this album to be wrong. There aren’t many times as a writer for this site that I’d like to a review an album twice, but as much as I like it right now I actually want to travel back in time like they do in these rhymes to see if I’d give it a perfect 10 later.