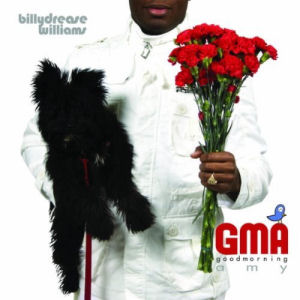 Billy Drease Williams is a laid back, feel good kind of guy. That much is apparent from one glance at the cover art to “Good Morning Amy.” On the front you see Williams standing in front of you with flowers and a dog. On the back, you find drawings of everything from puppies and turtles to thumbs ups and locks. Without any background, confusion is sure to abound. Who the hell is Amy? Why do I care about Amy? Is that a hard boiled egg flying through the air? Proper background is essential before entering the world of Billy Drease Williams. Williams will tell you that Amy isn’t some long lost lover, but a “personification of one’s goals, desires, and ambitions.” In an interview with our own Adam Bernard Williams further explains Amy’s name comes from Amy’s Place, a coffee shop he frequented during the making of this album. Amy’s Place embodied his own goals, desires, and ambitions, so he decided to try to create a universal Amy for us all to appreciate. Whether hip-hop fans will be declaring themselves to be on their “Amy” when they grind is yet to be seen, but Williams’ infectious charm is undeniable. The album kicks off with the title track as Williams elaborates on his philosophy:

“Show me work and I’ll show you dirty pants and a dirty shirt cuz I work
Hard as the next man or maybe more, got the same 24, what you doing with yours?
You balling, stanking up the spot, and your arms too short for what I got
Cuz I walk with the most high, look at me, so it’s really not fair to compare with me
No body guards, no stupid cars, still fresher than you no matter who you are
Cuz it’s in my soul, it’s in my bones, and you can’t take away what you can’t control
So yeah! Get back to your box, cuz you out of your league around here homebwoi!
Yep, bachelors, masters, PHDs, you ain’t got your equivalencies so wake up!”

The album maintains a similar uplifting vibe throughout. Billy Drease produces “Just Doin’ It” and strips the track down to bass drums and a cool voice effect. Lyrically, he does little more than deliver his own swagger rhymes, but the funky beat and catchy hook make the track work. “I’m Good” and “Comin’ To Me” also do well in maintaining the theme of the album as they both contain themes of overcoming obstacles and persevering. “Shut the Gate” elevates the album’s theme by taking a deeper look at love lost, pain, and the need to bounce back from it. “Slow Down” literally beckons the listener to reflect on life and not let it pass by:

“She was smart, real good grades
Dudes is like zombies, they all want brains
That’s what she did, popped out a kid
Kicked out the crib, no place to live
She gonna model now, make a video
Could have been a lawyer, instead she in a swimsuit
And her intelligence falls on deaf ears
A couple times now turns to a few years
It’s like drug dealing, she can’t quit it
Too much money out there not to get it
Speed with the vanity plates on the Benz
S-T-P, H-A-N, Girlfriend in too deep she got a name
Working on a book called Pimp the Game
Now she talking that she want respect
With the guys you’ve been with, girl you need to get yourself checked
Slow down”

The message isn’t new, but Williams; smooth delivery and emotive beat make the concept sound fresh. “Run” follows up that message with one about lingering love and emotion. “Never Been To Paris” features soft, melodic piano keys and Williams lacing us with another reflective song about life getting in the way of one’s dreams and goals and the importance of remaining focused and motivated. A shout out interlude/rap segues to a reprise of the title track, ending the album on the same positive note it started on.

“Good Morning Amy” is a resounding success for Billy Drease Williams. Producing the bulk of the album and rapping on the entire album, William’s talent and ear for music is showcased clearly. The only real misstep on the album is “In My Sleep,” which recycles a classic BDP hook for the umpteenth time. Other than that, Williams stays focused throughout, skillfully weaving over the beats with a catchy blend of confidence and motivation. While he does nothing new, Williams delivers his positive message in a fresh and appealing manner. “Good Morning Amy” is sure to appeal to any fan with an open mind and an open heart.