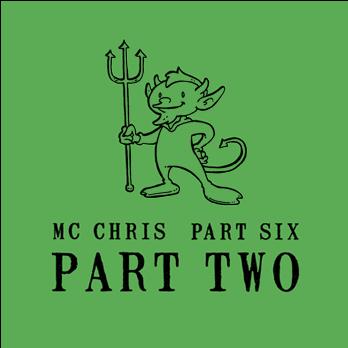 Look, at least mc chris doesn’t pretend to be from the streets. Some have written off the eclectic vocalist as a joke for nerdy white kids with too many Star Wars toys and too many dates with their Dungeons and Dragons friends instead of actual girls. And there is surely a point to that I suppose, but how anyone who profoundly loves hip hop can hate this guy is beyond me. Sure his high pitched voice gives the impression someone took a lightsaber to his nuts as a kid, he raps about Harry Potter characters, and once played a part on Aqua Team Hunger Force as MC Pee Pants. He’s juvenile, foul, and a dork. But he’s also honest as hell. While some MCs play Don by day while hiding their past as security guards in prisons mc chris doesn’t try and cop to gang affiliations he doesn’t have, crimes he hasn’t done, or girls he hasn’t slept with. Chris just loves hip hop, and is doing it the best his heart and geeked out mind will let him.

“Part Six Part Two” is the second of four EPs Chris will be releasing this year, with all of them being compiled into a record after the fact. Opening with a game show straight from Hell the comedy aspect of Chris’ material is obvious. When brought out on a game show on his own record the crowd boos. This cat can’t get respect on his own records.

Luckily he quickly does his best to win back his disc’s respect. “Zuckuss’ Prius” is a blisteringly bizarre tribute to one of Star Wars’ more obscure bounty hunters, while the ska based guitar and dance hall beats of “Neville” give it the distinction of being the most lyrical song ever released about the kid who could have easily been Harry Potter had a evil wizard not blown up the wrong family.

He’s the kind of self effacing prankster who’ll write a euro dance rap number just so he can use a vocoder to sing “potato cakes” and rhyme about smoking pot while working at Arby’s, and somehow makes the thing a love story. “Japanese Maid” finds Chris lusting over the lovely lady who cleans his house and apparently his pipes as well. It’s a stupid line, I’ll admit that, but you’ll chuckle at a lyric like “I need some cookin’ cleanin’/Don’t Mean to be demeaning/ but when you feather dust my nuts I turn into a demon” if only because hearing such sexual bravado coming from a self confessed dork of this degree is so off base. And hey if you’re offended Chris simply spews lyrics like some kind of computer store Twista so by the time your brain gets all grumpy he’ll have probably said something else to make you laugh.

“Part Six Part Two” isn’t the best place to pick up with mc chris for newbies. It’s in the middle of a series of EPs. It’s only got four real tracks, with the records other three tracks being fucked up skits about the aforementioned game show from Hell staring everyone from Chris to Napoleon. This is about as weird as the guy gets. Yet through the weirdness you can see the adoration the man has for the genre. Curious parties might find themselves getting more out of last year’s “mc chris Dead” but anyone with a taste for weirdness or a secret World of Warcraft habit won’t be able to hide their smiles. Chris doesn’t front about being someone he isn’t. Why should you front about hating good tunes simply because the weird ass class clown is the one delivering the rhymes?