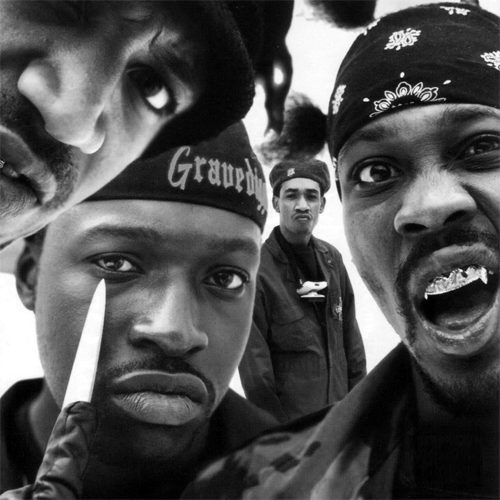 What is horror rap? While some could point to a record like “6 Feet Deep,” the Gravediggaz brilliant blood, guts, gore, and evil dripping debut, as a template for the horror movie on wax genre when you examine the content of most hip hop the topics at hand are straight out of the nightmares of parents everywhere, regardless of if they live in the hood or the suburbs. At this point 50 Cent and Lil Wayne have individually killed more people on records than Jason or Michael Myers have on screen and DMX has bragged about raping his enemies children older than 16 on a album that sold a million copies. Hip hop is naturally prone to horror due to the circumstances that inspires so much of it, so what makes this record so different? Intention; when he found himself disillusioned with the business side of hip hop in the early 90’s, legend Prince Paul decided to unleash the rage boiling inside him via some of the scariest beats ever, and invited some friends with equal issues to write the least commercial and most fucked up album the genre had ever seen.

Using murderous serial killer imagery and a healthy dose of Satanism RZA, Too Poetic, Frukwan, and Prince Paul laid the shallow rappers of the day they saw making too much undeserved noise in a ditch and lobbed lyrical bullets until they never came out. Keep in mind this record dropped only a few months after “Enter the 36 Chambers,” so even RZA was still at his hungriest when lashing out at those bringing weakness to the game. Uplifting song titles like “1-800-Suicide” betray the viciousness of each member’s feelings towards their respective era’s scene, but RZA’s verse is nothing short of terrifying.

“Six fucking devils stepped up playing brave God
Had the fucking nerve to try and enter my graveyard?
I’m the Ryzarector, be my sacrifice
Commit suicide and I’ll bring you back to life
The first was convinced; stuck a water hose in his mouth at full blast
So his head can explode
Second said hmmmm that’s good but I can top it
Put an axe up to his head and then he chopped it
Blood shot out in every direction
The rest didn’t know what to do, I made suggestions
Put a slug in your mug, overdose on a drug
Wet your hair stick a knife in the plug
Or be like Richard Pryor set your balls on fire
Better yet go hang yourself with a barbed wire”

Meanwhile “Diary of a Madman” features Scientific Shabazz opening with a seemingly unbeatable guest verse, including the record’s best line:

The group swoops back in though and reclaims their own track. Frukwan in particular shines with violence that would make the most gore soaked slasher dry heave:

“Stroll through the dark conditions
I stone you till I see sparks of friction
I chop ya like a coal miner
Then combine the drug, and mix it with your blood
Some more? I give you some more
And watch you crawl
Guts hit the floor, worms that dig your pores?
I trick ya, ha, then I’m quick to syringe
Deep into my thoughts and bust out your skin
You scream, portraits of inflatable pain
You can’t stand; you’re up to your hands in quick sand”

“Diary of a Madman” is one of the few times on the record RZA provides the beat, in this case one that was originally an unused demo instrumental for the Wu-Tang Clan. It’s a miracle this beat wasn’t lost to time as its Johnny Mathis sample sounds straight out of a Vincent Price flick. It’s a classic slab of RZA production that stands out from the throbbing stab of Paul’s tracks and coupled with the court room drama interludes provides a terrifying four and a half minutes.

“6 Feet Deep” is a nightmare of a record. Hate is an emotion commonly found in hip hop but when you look at this record, where hate is a metaphor for murdering the mindless drivel that infected early ’90s rap, its timelessness comes out. There are those listeners out there who long for the good old days, living in a world of fantasy nostalgia wishing for a time that didn’t exist to come back. No matter how bad you think shit is right now, it was always this bad artistically. If you think Solja Boy is the height of buffoonery thank your lucky stars you don’t remember Tag Team and “Whoomp There It Is.” If you doubt me check out youtube or ask any of our other staff members. They’ll tell you.

The Gravediggaz were born out of a disdain and hatred for the bullshit that surrounded four men whose talents were under represented at the time and set out to make the most uncompromising music possible. Does the graphic violence or demonic content make this a horrorcore classic? Horror has always been used to bring metaphoric messages to audiences who might not otherwise have sought out those lessons, be it Last House on the Left examining post ‘Nam culture shock to violence or Dawn of the Dead mocking American mall culture. In the case of the Gravediggaz the horror is not the violence of their rhymes but the weakness of a rap scene that’s so focused on making you dance you never think. I defy anyone to not dance to “Nowhere to Run, Nowhere to Hide,” or any other outburst of evil you’ll find here but you’ll still think. Too Poetic brings this calling to life on the album’s title track.

“I floss my teeth on the gospel tracks
I’m not an apostle, but I bring the axe to ya back
I chew and attack, like Crest on plaque
After that, your world is flack
You drop into a hole, your mold separates from your soul
Behold, the Gravediggaz told you ‘Beware’
But you didn’t listen
So now we appear an’ eardrums glisten”

Hip hop has always had music that makes you question the value of the whole genre. The Gravediggaz and “6 Feet Deep” lead by example. If you don’t like the music that surrounds you, go out and make your own. Sixteen years later this record is still a classic, and Tag Team’s a hip hop punch line. The cream will rise to the top, even when it’s mixed with this much blood. The Gravediggaz are more than horror, more than violence, more than Prince Paul, RZA, Too Poetic, or Frukwan, they’re one of hip hop’s finest examples of reaching out and seeking what’s yours in the face of things that bother you. In a world of Solja Boyz this shit is still as relevant as ever.