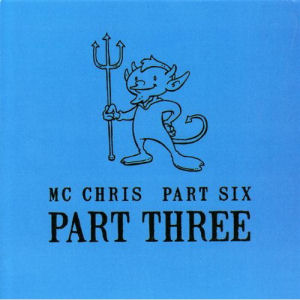 In my own ongoing effort to clear up the mystery behind 2009’s mc chris EP release series, we come now to the third and final instalment, aptly named “Part Three.” Having initially heard the albums out of order and then rearranging them into a series as I worked through this set, a few thoughts occurred to me worth sharing before going further:

The latter point is perhaps the most damning, which is itself an irony because taken in order the storyline through all three extended plays is that mc chris goes to Hell. They waste more time debating what the nature OF Hell is in one skit than most philosophy students would in an entire semester, but I digress. The Devil/Mr. Chandler/Killian gives our hero Chris Ward one chance to escape his fate, and that’s to be a contestant on an overbooked game show called G.T.F.O. that makes “The Running Man

” feel small by comparison. There’s just over hour’s worth of material on all three EP’s combined, and the skits take up an excruciating half hour total.

At the end of “Part Three,” when announcer George Lowe promises an “exciting new episode” next time, I really can’t think of anything I would rather tune in for less (except Tim & Eric’s Awesome Show). The saving grace of any of these short releases is the actual songs by Mr. Ward, and thankfully this third instalment has four. Like the other volumes, the songs here are produced by Andrew Futral, who understands the need to give this squeaky-voiced rapper his own distinct sound rather than try to fit him a traditional boom-bap mold. Songs like “Hipster Hunter” work as a result as they reference hip-hop traditions and styles, while simultaneously poking fun at himself, yet still maintaining a strong flow.

“I was out in Brooklyn let it be known
2005 the waterfront was the zone
That’s when I arrived I was fresh off the boat
The isle was ATL and it was swell to be home
Couldn’t go to Queens, greek priests look like sith
Couldn’t go to Bronx cause that’s where the real rappers live
Couldn’t live in Jersey cause some ex’s wanna hurt me
Couldn’t happen in Manhattan cause I’m just a fan like Fergie
So even though it really hurt I went ahead with Billy Burke
And it was so convenient the break seemed like this could really work
Then I started countin jerks found them out was quite a stir
Had to get Excel just to tell how many that there were
Easy to identify I learned how to hunt them
Missing from the crib and first to flame them and I dumped them
Know what I say fuck them a defensively fashioned function
You think that they’d be fun but that’s a dumb assumption
Party’s nonstop ’til cops come a knockin ’til bodies start bobbin
I’m the hipster hunter”

Ward also throws out the obligatory Star Wars rap on this edition, and in the span of a decade we’ve gone from “Fett’s Vette” to “Dengar’s Dumptruck.” If that sounds like a downgrade that’s not a coincidence. While Boba Fett was a cool enough bounty hunter to inspire an entire backstory of his own that became a major chapter of the canon universe, the other Star Wars figures he raps about are increasingly more obscure with each CD. That’s obviously part of the joke – if his fans insist on more Star Wars raps he’s going to choose to rap about people who get maybe 15 seconds of screen time out of all six films. Unfortunately appreciating the comedy on an intellectual level doesn’t mean I enjoy songs about Corellian mercenaries who look like fat middle-aged slobs. mc chris does his research and gets all the facts correct, but at this point, I’d rather hear a rap about R2-D2.

Not that there are many songs to chose from, but two gems of this album are clearly “Emo Party” and “Distant Lands.” The former isn’t a tired joke – it’s a rather fresh one which juxtaposes the idea of people who are thought of as sad and lonely living it up like kids at an all-night rave. The contradictions will bring a smile to your face.

“Why I suffer, why I moan
Why I feel bad so bad to the bone!
Grind my teeth, demolish my molars
Erratic emotion cause I’m mostly bi-polar
Shake that ass, write that blog
Get out the word while you work that jaw
Write that poem, squirt them guts
You’re not alone, yo you’re not nuts!
Are you depressed? Suicidal?
Lackin liquids that are vital?
Come to my party, it’s like Oz
It’s where we go to shake them blahs”

“Distant Lands” treads into the area of nerdcore which mc chris has at times emphatically insisted he doesn’t belong, but the video game-inspired beat is a perfect fit, and his charmingly clumsy attempts to impress a girl until they wind up together “all pretzeled safely nestled” strike a genuine chord. That’s not to say mc chris hasn’t admitted on all of his albums that he’s a hip-hop dork, but it’s when he embraces that inner dork to the fullest that his songs transcend niche genres and explain his larger popularity on a national level. The problem is that while full-length mc chris albums like “Eating’s Not Cheating” can dive into his weird nerdy world without abandon, Ward loses himself in the plot of “G.T.F.O.” on this series and spends more time on it than on his songs, to his detriment. I can’t enthusiastically recommend any individual volume of the three.

* With some minor changes, all three were eventually compiled into one remastered album entitled “mc chris Goes to Hell