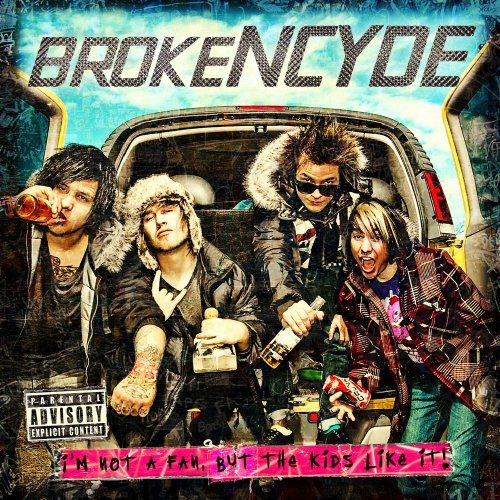 Brokencyde :: I’m Not a Fan But the Kids Like It

E-40, what the hell are you thinking man? There’s a difference between cashing a check and being paid in 30 pieces of silver. Doing a guest spot on a Brokencyde record is 30 pieces thrown right in the face of everyone who’s ever bled and hustled for this genre, and telling them getting a check is more important than everything the genre has stood for. Frankly sir this very un hyphy.

For those of you fortunate enough to have never heard Brokencyde this won’t be so much a review as it is a warning of a coming plague upon hip-hop. Brain damaged suburban kids call it Crunk-core, a combination of hardcore punk screams and Red Bull fried crunk by kids who discovered Garage Band on the Mac Books their folks bought them. Their lyrics will make you long for the intellectual depth of Lil Jon, take this gem from “Scene Girlz” for example.

“Yeah you’re in need of attention
now you drop that ass like you’re in detention
sit down girl, just shut up and sit
before I make you suck my…
OMG, you thought I’d say dick
but I won’t say dick till you touch my dick
so get on your knees; suck it bitch
BC13 and we run this shit”

Oh and they’re white dude’s who open up one of their early singles, “Bree Bree” (as in the sound a pig makes), with “Bree bree nigga.” I doubt they’re racists, they’re probably just moronic hicks who think as long as it’s done in the context of a hip-hop song (or out of ear shot of anyone with much melanin in their skin to set them straight) it’s okay. This wouldn’t be a problem worth addressing to a hip-hop audience if not for one major factor those with their ears to the streets, or at least with their ear turned as far away from shitty music as possible, are missing out on. These morons are selling a lot of records.

Now right now they’re mostly selling in the suburbs, to thirteen year old girls with too much disposable income and not enough parenting, but they’re getting played on MTV. They’re getting coverage. And they’re getting called hip-hop. I know I sound like a hypocrite for even posting this review. After all there isn’t such a thing as bad press, right? This isn’t so much of a review however than it is a warning flare. Their record is called “I’m Not a Fan, But the Kids Like It” and in the face of all logic this jumbled vomiting of autotuned singing, belched screams, and cut rate Garage Band tracks has found a foothold, and it’s only a matter of time before it spreads. I’m dead serious.

I’m going to get a little Maud Flanders for a moment here, but won’t someone please think of the children? Setting aside that these musical morons aren’t Eminem, and haven’t even a fraction of the talent Eminem had out the gate, imagine if you will what the impact on culture would have been if Em had come out spouting off with “nigga” even on one song and still had the impact on kids that he had. If a kids parents aren’t going to blink an eye at the lyrical depictions of date rape and sexual violence found on this record do you really think the same fools are going to sit their kids down and explain why it’s beyond fucked up for their favorite group to drop an n-bomb even in passing? And what happens when these kids finally move on to real hip-hop? Will their initial exposure to this musical lead paint forever warp their idea of what the genre is? These are serious questions to be asked.

So yeah, E-40 I’m pissed at you man. The callous bastardization of hip-hop offends the hell out of me. Rap your background. You don’t suddenly become a part of hip-hop because you talk about drinking, smacking bitches, getting high, and getting “crunk.” You’re just another batch of moronic white kids who think using the word “nigga” in an ironic way if funny. And if you’re stupid enough to drop it on a record, you’re stupid enough to probably use it in real life. White people in the early 20th century made a mockery of black culture by playing off stereotypes for others amusement, and at the expense of everything that made that culture special to begin with. But you know what Brokencyde? At least those assholes had the decency to be open about their racism by performing in black face. This isn’t irony to us. This is music and a way of life. So get the hell off our lawn.

Brokencyde :: I'm Not a Fan But the Kids Like It
1Overall Score
Music1
Lyrics0