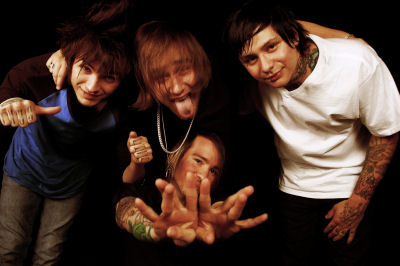 Rarely does a band come around that’s as polarizing as Brokencyde. Their self-defined crunkcore sound has earned them a dedicated fan base, and hordes of angry critics who deride the band as one of the worst things to ever happen to music. With that in mind they named their first official LP I’m Not a Fan, But the Kids Like It!

They’ve followed that album up with the just released Will Never Die, and are currently on the road with Millionaires in support of the album. This week RapReviews caught up with Brokencyde’s Mikl to ask what it’s like to be the most hated group in America. What we found was a very different side of Brokencyde.

Adam Bernard: How does it feel to be so hated?

Mikl: {*laughs*} You know, it’s not a great feeling, but in this business you just gotta have tough skin otherwise you ain’t gonna make it. It just becomes a joke after a while. It really doesn’t matter. The only thing that really matters to us is keeping our crunk family happy and keeping them smiling doing what we do. We don’t care about haters or all that other bullshit.

AB: When you first came out, did you expect the reaction you received from the press?

M: You don’t expect it. We (also) didn’t expect to get where we are, or anything. All we’ve wanted to do is just make people have fun and smile, and when you’re trying to do something you thought was good and different and people hate it, of course at first it’s just like whoa, this sucks, but it’s whatever dude, we don’t care about the critics, or the press, or whatever because at the end of the day we’re still being talked about.

AB: At this point would you go out of your way to hide a positive review if you received one?

M: No dude, it’s cool. Everybody’s entitled to their opinions whether they’re positive or negative, so if we do get a positive one that’d be cool, but if not, it’s still cool. There are people that do support us, and when people support us those are like family to us and we’ll stick up for them and have their backs, so if someone does stick up for us and does give us positivity then it’d be amazing.

AB: It sounds like you have a tight relationship with your fans in terms of almost being a community.

M: Yeah dude, we want to build this to be a family. It sucks because there are people that are bullied, I was bullied. There are kids who kill themselves, or hurt themselves, or become very violent because they’re being bullied because someone else is, deep inside, not happy with themselves, which is sad. We want to build a crunk family so they (the kids who are being bullied) have each other’s backs and support each other because there are people out there who don’t have the love they wish they had and one thing about music is that it’s a community that everybody can love and if we can add to that, especially being happy, we do have crazy lyrics, but at the same time you’re smiling and having a great time, so that’s what we want, a big solid crunk family support system that can back each other up.

AB: One of the things that led me to being interested in interviewing you were the bullying-like stories made up about you on the internet. There was one that said you had all died in a car accident, and another far worse one that you had been arrested on drug, statutory rape, and child pornography charges. How do you go about dealing with those kind of stories, and how did your parents react?

M: Death is pretty intense. We kind of laughed about it, but at the same time when we have our parents calling crying and they don’t hear from us because we’re busy from 12 o’clock till one in the morning so we barely answer our phone calls, it adds stress and heartache to our parents when they hear “did you hear your child died in a bus crash” when we’re not even in a bus. That’s the funniest part, we’re in a van, but to hear my parents calling and crying worried about us, it hurts and it really angers myself personally because there’s some dumbass putting my parents through heartache. Nobody wants their family hurt.

AB: It seems you managed to at least work one of those ugly false stories into the title of your next album, Will Never Die. Tell me about the project.

you had E-40 on the song “Booty Call.” How the heck did that happen?

M: Our management, our old manager, our label… I have no idea. None the less we were honored to work with him. I guess he kinda saw what we were doing and believed in it a little bit and got on board and did that song and we loved it.

AB: Are there any unexpected guest appearances like that on the new joint?

M: No. We were going to, but we just kept it really simple and purely Brokencyde and got Daddy X on a song.

AB: I know we spoke about your fan base a little bit earlier, but other than the escapism aspect of things, what kind of impact do you think you have on your fans?

M: They’re really solid fans and they’re super dedicated, so anything we believe in they pretty much stand behind us, which is really amazing. Bands come and go, but so far we’ve stuck around, I think, fairly well, and to be able to have fans that listen to you is what’s really important nowadays because the world sucks.

AB: That idea that the world sucks, is that a driving force for you guys to create stuff that you hope people enjoy?

M: Not really, but it helps. Life is just really hard. You have your bad days, but anytime you go to a show you’re just happy and that’s why we do what we do.

AB: You just kicked off a lot of shows as your Ka$h 4 Ku$h tour with Millionaires, another group that isn’t exactly well loved by the critics, just started. Did you two link up on Warped Tour back in ’09? How have you developed a relationship with them?

M: When we first started we got one of our first bigger shows with Millionaires in Fresno and ever since then it just grew and we realized that with this new genre of music we need to stick together because there’s not a lot of support for us out there.

AB: You’re touring around Thanksgiving time. Is this something for the whole family?

M: {*laughs*} Uhh, sure. It’s gonna be rough. Out of 26 years this is gonna be my first (Thanksgiving) away from family, so we’ll see how it goes.

AB: I notice your use of dollar signs as S’s in your tour name. Are you hoping Ke$ha or Ma$e takes notice of you?

M: {*laughs*} No dude, I totally forgot about those dudes, but that would be totally cool.

M: Yeah, probably, dude. She might stumble in and get on stage. Who knows?

AB: Other than your family of artists, who are you feeling right now in terms of music.

M: I love Innerpartysystem, Circa Survive, Bruno Mars. I like everything, dude.

AB: What else would you like people to know about you, the band, and your music?

M: That even though it’s not hugs and kisses and “let’s save the world” kind of lyrics, at the end of the day we’re trying to make people happy, and have fun, and be strong, and have that strong mentality of individuality, because that’s what everybody needs to have. That’s what we do. We’re ourselves and it you like us, you like us, and if you don’t, you don’t. That’s just what we’re going for, to be a strong person and have fun in life because life is so short that you never know when it’s gonna end.