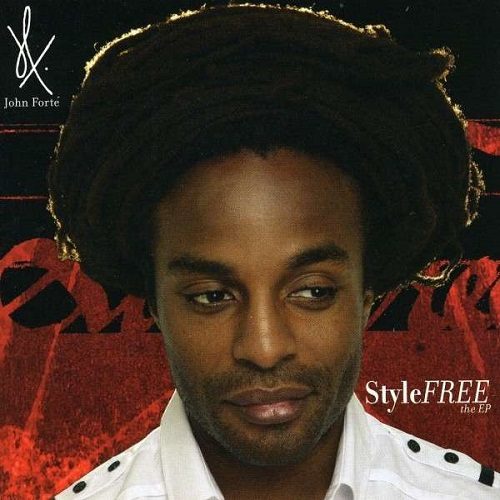 In 2000, John Forté had a promising career ahead of him. He had co-written some songs on the Fugee’s blockbuster “The Score.”  He had released a solo album and was working on another one when he got busted for drug trafficking and all of his dreams had to be put on hold. Ironically, the shady deal that got him thrown in jail was supposed to finance his career. He was offered $10,000 to get people to move what turned out to be 30 pounds of liquid cocaine from Houston to New Jersey. Forté swears that he didn’t realize it was drugs, but he got 14 years, while the guy who set the deal up walked away without serving a day. Forté spent 8 years in prison before finally being pardoned by President Bush in 2008. “StyleFREE” is his first album of material since getting freedom back.

Forté studied violin at Phillip Exeter Academy, and he brings that musical talent to the songs here. It’s more accurate to call him a rapper/singer/songwriter than a rapper/producer. These aren’t beats, they’re songs; most of the tracks incorporate guitars, and Forté is singing as often as he’s rapping. The album starts off with title track “StyleFREE,” which interpolates “Nautilus” with a reverbed guitar. “They rather that I rot in hell but I repel the bottom” he raps. Forté’s flow has some of the laid back ease of Mos Def, but is more precise and studied. Like Mos, he also sings on his track, and he’s a better singer.

Forté’s time in prison weighs heavily on the album, although he doesn’t always explicitly reference it in the lyrics. The mood of the album is heavy and sad, like a man who is trying to put the pieces of his life back together. “You could say the judge killed me but then I came to life” he raps on “Breaking of a Man.” “Play My Cards For Me” is a neo-soul track in which John sings about searching for redemption and forgiveness.  On “Nervous,” he raps:

“Nervous” is the best song on the album, combining a melancholy guitar chord with Forté’s righteous anger:

“Nervous,” like all of the songs on the album, sounds beautiful. This production throughout is excellent, and all of the instruments sound crisp, clear, and perfectly placed. Forté doesn’t clutter things up, instead relying on more subtle instrumentation; a little bass, a little guitar, a drum machine. Musically, the songs come closer to soul than hip-hop, and the echoing guitars are reminiscent of a spaghetti western soundtrack. While Forté’s first solo album was a straight-up rap album, on “StyleFREE” hip-hop is just one of many sounds Forté is working with.

The songs may all sound great, but that aren’t all great songs. I wasn’t feeling the alt-rock feel of “Breaking of A Man” or “Play My Cards For Me,” although it may excite a mainstream audience. The biggest issue I had with this EP is the mood; most of the songs are slow and depressing, which makes getting through all seven of them a slog. Maybe that has to do with the where Forté’s head was at when he was recording these. His sadness weighs on the album, and makes it hard to sit with. It’s a little like hanging out with someone who is really depressed: you feel for them, but it becomes a drag to spend time with them.

Forté is a great singer and songwriter, and a good rapper. “StyleFREE” is the sound of an artist trying to find himself after a long involuntary hiatus. While there are some solid tracks here, I’d love to hear more upbeat, uptempo music coming from Forté. He’s got too much talent to be spending good time feeling bad.