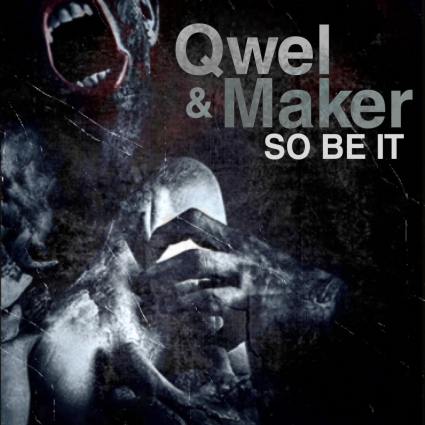 About once a week, my roommate and I have the following conversation:

The point is, I tend to gravitate towards fringy hip-hop. I like my rappers wordy and abstract â€“ preferably self-loathing college graduates with girl problems and psychological weed addictions. Qwel, on his second collaboration with DJ/producer Maker, “So Be It,” fits the bill pretty well. And, at least from where I’m sitting, that’s not an insult.

Indeed on “So Be It” Qwel shines as both an adept writer and contemplative philosopher, tackling topics ranging from religion to politics to relationship with incredible depth. On, “Friend or Foe”, over a steady percussion, subtly integrated guitar, flute, and organ, and Far East-inspired chorus, Qwel analyzes a complicated relationship, not through generic clichÃ©, but through nuanced perception, interweaving concrete imagery with poetic metaphor. Instead of going on yet another backpacker’s polemic about a victimized girlfriend or a sexually inadequate male, Qwel asks “who owns who” in his refreshing dissection of this love affair.

While on the still undeniably catchy “Back Stage Pass,” Q’s attempt at societal commentary sounds like he is just listing words, albeit with unparalleled verbal dexterity, on “Paper Dolls,” this Windy City MC intelligently discusses his generation’s inescapable conformity. He refers to his fellow Gen Yers as, “pretty paper dolls,” a simple yet poignant metaphor for those hopelessly grasping at trends. Unlike so many other holier-than-thou indie rappers, on “Paper Dolls,” Qwel is not out to brag about his own individuality, but rather to point out that, somewhat sadly, trends have become unavoidable (“You might be in the band or band management/depending on the brand it is.”)

Maker’s beats dynamically supplement Qwel’s wordy cognitions with remarkable agility. On “Berzerker,” he places quiet percussion under ominous static and fuzz-base, while Qwel compares modern man to a conflicted cyborg. The track features an instrumental filled with robotic scratching which somehow manages to be both frightening and catchy. Indeed, throughout “So Be It,” the Midwestern DJ, is able to set a doom-laden tone without being oppressive. But like other talented indie producers with a knack for the eerie, such as Blockhead and Alchemist, Maker is able to competently explore various production styles. On “Back Stage Pass,” he lays down an upbeat horn riff that won’t get out of my head. On “Golden Era,” the reggae-inspired melody provides Qwel with plenty to work with and the listeners with plenty to nod their heads to.

Given that “So Be It” is technically brilliant and uniquely stylized, I should be a big fan. Still, the record is ultimately unsatisfying. While Qwel is able to spit quality knowledge over Maker’s diverse array of backdrops, the album lacks identity. Most of the backpackers listed in the dialogue above are able to both rant about the modern world, while, at the same time, revealing something about their own passions, neurosis, or ego; Aesop is paranoid, Murs kind but lustful; Cool Calm Pete is a stoner. To be sure, these rapper express abstract opinions, but they are certain to let the listener know that they are their opinions. This typical cat, on the other hand, remains largely anonymous. He rarely speaks of himself. He hardly reps his city (with the exception of the excellent final track, “Golden Era.”) He does not reveal insecurities, longings, or points of pride. Instead, Qwel prefers to step back and lecture. While this leads to a ton of insight, it gives the listener little to relate to.

The production, while consistently innovative, does not make up for this shortcoming. Concededly, Maker’s ability to supplement instead of dominate makes his beats appropriate, not mediocre. Still, on an album this theoretical, the listener is left begging for ownership and, without more in-your-face beats, this ownership is never achieved. Our DJ/producer does not lack the ability to throw some internal variety within a song, but he includes few instrumental bridges or solos which scream to the listener: “this is who I am!”

The ideal Qwel is a synthesis between the Qwel of Typical Cats and the solo Qwel. Typical Cats Qwel constantly reps himself but rarely strays from the battle-rap format. Solo Qwel is a true philosopher king, but does not let the listener get to know him. In either case, he is an exceptionally talented MC, but, as a listener, I want more than a showing of talent. I want to learn something about the MC showing it.