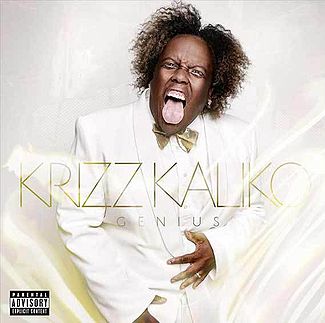 It took Krizz Kaliko ten years to drop his debut album with last year’s “Vitiligo.” During those ten years, Krizz remained busy touring with Tech N9ne, dropping plenty of hooks and verses, and honing his mic skills. His debut was exactly what it should have been, a heartfelt outburst of emotions from an emcee that had essentially been held silent for far too long. Thankfully, we do not have to wait another ten years for Krizz Kaliko to hit us with his follow up. The fact that his debut charted as high as #19 on the Billboard 200 certainly didn’t hurt, but Krizz’s ability to hold down an album showed Tech N9ne all he needed to see. While his debut felt like a therapeutic release, “Genius” shows us Krizz’s more playful and diverse side. The album is still littered with deeper songs, but the focus seems to be partying.

“Genius” opens up strongly, with “Chip On My Shoulder” where Kaliko hits us with some trash talking:

“Chip on your shoulder when you know you’re an elite soldier, believe me
Don’t believe me? Want to see me armed, when I hit TV better leave me on
Spit telekinesis far as it reaches, people can see I’m a beast at this
Hit the repeat and the hit will be leaving this
Got a chip on my shoulder and bet you’ll be leaving it”

“One-Nine-Seventy-Four was the year mommy and daddy had created a monster
Funny looking kid from the suburbs and referred as genius cause nobody wants to
Cook up a musical recipe, so left it up to me
so I’ma give it what I F’ing got left in me
Cause if I left it up to y’all, most of you would drop the ball
I be raping these records lately and y’all ain’t trying
You say celibate, but I ain’t buying
And O-B-K baby, baby
That crazy world? Maybe, maybe
Don’t be caring they hate
And if you staring it may be the
Blinding, cause I’ma supernova I’m shining
The tippy top is where I’m residing
So if I got to rescue ranger it,
Picture painter it
Whoops, I left my stain in it”

Despite the strong opening, “Genius” ultimately loses steam as it goes on. That is not to say there are not many dope songs to be found among the album’s 20 tracks, but those tend to be the exception and not the rule. After the strong opening, we are given a string of sub par party records. “Backpack” is dedicated to the posterior as Krizz compares it to the school time accessory. “Doe Doe” wastes an E-40 appearance on a so-so hyphy track. “Get Off” is an R&B track, and while Krizz has the vocal skills to pull it off, the song itself is an uninspired sex anthem. “Butt Naked Fun” is merely “Get Off Part 2” and while there is nothing wrong with it, there is nothing noteworthy about it either.

The albums kicks into its highest gear starting with “Getcha Life Right” where Skatterman and Snug Brim join Krizz for a hardcore anthem. “Love You 2 Death” is an interesting concept track that show’s Krizz’s creativity at its best. “Misunderstood” and “Bipolar” both delve deeper into Krizz’ psyche and show there is much more to be learned about the man. “So High” is nothing more than an upbeat smoker’s anthem, but it is followed up very nicely by the dark and hollow “The Chemical” which deals with drugs as well but from a different perspective. Sadly, Krizz reverts to tired party jams and fires a string of four tracks specifically geared for the club before ending strongly with the powerful “Choir Boy.”

It’s hard to sum up “Genius.” In many ways it is much better than Krizz Kaliko’s very solid debut album. In fact, if you were to cut the 8 party tracks from the album, I’d be very tempted to give the album a score that would cause quite the controversy. Those sub par tracks can’t be ignored, and with them “Genius” as a whole doesn’t quite reach the status of his debut. Krizz could have even included 2 or 3 of the best ones and gotten away with it for the sake of variety and sheer entertainment, but 8 obvious club tracks is too much. I understand the necessity of those tracks, and even with them included I give this album a resounding recommendation based on the strength of the other 10 tracks, but ultimately the rating has to suffer. Still, Krizz is definitely headed in the right direction. With less focus on the party, or at the very least with more creativity thrown it’s way, Krizz Kaliko will surely be a rapper you will be checking for in the years to come.