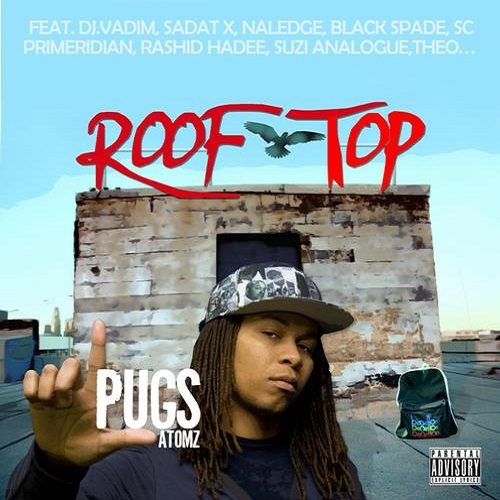 Pugs Atomz has been around the Chi-Town hip-hop scene for a minute, releasing albums dating all the way back to 2000, and in 2007 we caught the late pass by reviewing his “Conversations With a Chamelion” release. At the time the writer covering Pugs described his album this way: “a tasty backpack snack featuring a veteran who sounds like he’s ready to move onto bigger and better things.” It seems those bigger and better things have arrived in 2009, as his label is heavily repping the new album “Roof Top,” and the accompanying press release promises an all-star roster of underground rap guests from Naledge to Primeridian and Sadat X. This is the album Pugs is ready to arrive on. He’s waited ten years to get all the way to the rooftop and now that he’s there shows no signs of wanting to come back down any time soon.

The press copy we received for review doesn’t feature every track on the album, nor does it include any liner notes for production, but what is here looks to be at least two-thirds of the album, so I’m fairly confident there’s enough on the advance to review. From the opener slash title track I’m already feeling Pugs’ rap:

“And I talk like a Derringer, darin ya to give it a chance
Who I’m foolin? Tom, Dick, Susan
Nothing gonna change but the soldiers are ready
And we all got aim, and all got game
CD sales low, but not at the shows
This from the heart, you can see it man it shows
And this one to grow, on, as the beat responds
to my vocals, lettin the truth arrive
If you’re hearin me now, this the future bein drawn
Listen, it ain’t that hard”

The unexpected plucky sound of the instrumental is met warmly by the conversational Atomz flow, a hip-hop hardened Radar O’Reilly without his mousy shy persona. Samples of Devin the Dude in the chorus and Common in the outro also show off the range of Atomz and his unnamed producer, clearly comfortable taking it from Chicago to the Dirty South and back again. The choice of cult favorites in both scenes is no coincidence either as Atomz would undoubtedly like to be held in that regard. With tracks like the blaring horn attack of “Fire” he’s got a chance. At times Atomz reminds me of what El-Producto would be like if he slowed down his delivery and didn’t try to cram ten thousand syllables into a bar – not saying that’s not dope when El does it, just that Atomz is easy to follow while staying just as intellectual.

“Who put the fire in flame
while you and your gang put the L in lame?
I never hesitate, came to the stage
with a bomb to detonate as the menace trickled down
Fear’s on your face, replacin that frown
Remember, you should never test the winner
Take some ginkgo biloba, never approach a soldier
When you know your whole style’s chocha
FIRE! That’s what they call me
Sucker think he good, think he can whup me
When my elements wreckin shit
Now watch as I rub together, these two sticks”

Sampling from “The Crazy World of Arthur Brown” is a definite plus on this track, although Atomz himself is verbally sampling from “The Education of Sonny Carson.” That’s what hip-hop is all about, so it’s little doubt that Pugs is a 10 year veteran of the rap game. These aren’t even the songs where Atomz is featuring big name guests, so it’s already a good sign for “Roof Top.” In fact I’d go so far as to say the solo tracks speak more for Pugs Atomz than the ones with the guests, such as the sing song staggered syllables of “The Nacrobat” over a warbling instrumental backdrop, or the aptly majestic “Kings Theme Music” that seems to flow over smoothly harmonized 1970’s soul.

Oh and those guest rap tracks? Only “Get it On” with Prime and Wes Restless, and “Wait and See” featuring Sadat X are included on my copy, but they live up to the solo material. The only thing I’m left wondering at the end of this promo copy of “Roof Top” is why I wasn’t paying more attention to Pugs before now. On the flipside, while nothing on “Roof Top” insults my intelligence or makes me want to not listen again, there’s still something missing. The beats are good, but if he linked up with a Statik Selektah or DJ Premier they’d be even better. The raps are good, but Atomz is so much of a thinker there’s no real party jams or songs that could crossover to a broader audience. It’s weird to say after a 10 year career, but Atomz is almost but not QUITE all the way to the top.