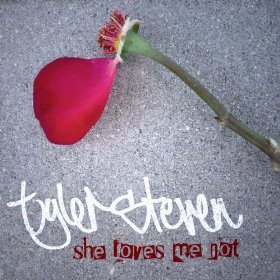 Tyler Steven :: She Loves Me Not EP

Tyler Steven is a nice guy. He really is, or at least that’s what I read on his Twitter page. The EP didn’t come with a press release, so I had to go above and beyond my usual research to get some information on the guy. He hails from Thousand Oaks, California, has a passion for baseball and he’s an ambitious dreamer that likes to write about love from various perspectives.

Coincidentally, the EP kicks off with the aptly titled “Dreams”, which is produced by Shiner. In fact, he produced the entire EP. Tyler proclaims himself to be the “next best thing since the Internet” and goes into a laundry list of things he’d do if he ever made it to the big leagues (in rap). This includes purchasing new bats for the Thousand Oaks High baseball team and a pair of Jordans for his baby nephew. Touching. Tyler makes sure to mention that he’s not into flashy jewels or diamonds, and aside from the initial boast, it’s a rather humble song that dares to ask “what if?” and I’m sure that many other artists feel the same way. The first love-themed song comes in the form of “Just A Touch”. The song samples Slave’s similarly titled “Just A Touch Of Love”, and touches (pun intended) on lost love and self-medication in the form of alcohol, but Tyler soon realizes that it only “duplicated the real”. There’s an internal battle between desire for the bottle or the body, and after citing that the alcohol doesn’t ask for money or beg for vacations, the alcohol wins out. “Choose A Side” features heaRd and they both declare that “love is for losers” and “love is for the foolish”, as Tyler raps:

“Now she might have left, but at least I was right
Bouncing off the rebound, back to love at first sight
Fight to get my time back, the days that went to waste
The money wasn’t made, and the dreams were never chased
Slow-paced and lovin’ it, I’m huggin’ on my bedsheets
Yeah you might be there, but my couch has got the best seats
Join me for a drink, and we’ll talk about another
Because it’s gettin’ kinda late and I’m goin’ under covers
Other people stand in line to get inside the place
Where the drinks are overpriced, but you can’t tell by the taste
Dates are for dorks, and love is for losers
My mind is for my music, and my money’s for the two-fers
Not a fan of crowds or loud noise at all
And I’d rather send a text instead of making a call”

“Time Machine” starts off with a sample from the film “Napoleon Dynamite”. Here, Steven actually mentions wishing he had the ability to go back in time to fix the mess he made, and even says that he’d go as far as “fightin’ a dude”. The EP comes to a close with the stellar “I Used To”. It features Kruse and Himself. The track samples “Crystal Ball” by Styx and compliments the emcees well, as Tyler raps:

“I used to swing bats, now I bring raps
And I won’t call it quits until the fat lady claps
Put us on your maps, if you like the way we sound
If you still can’t hear, then put your ear to the ground
I used to give a fuck about what other people thought
But now, I’m much older, and now I do not
[…]
I used to say “fuck love, and the bus that it rode in on”
But now I’m at the bus stop, and I’m about to get on
I used to write raps to my instrumental list
Now I get my beats from Shiner, but please don’t call him Chris
I used to do that, I used to do this
Then I put down my bat, wrapped a mic around my wrist”

“She Loves Me Not” clocks in at just under eighteen minutes and provides a good look into the mind of Tyler Steven and what makes him tick. Shiner’s production is also exceptional here, and the chemistry between the two should be apparent to the listener. I’m anxious to see what Tyler Steven is capable of doing with a full length release, but this effort should be enough for the time being–love it, or not.