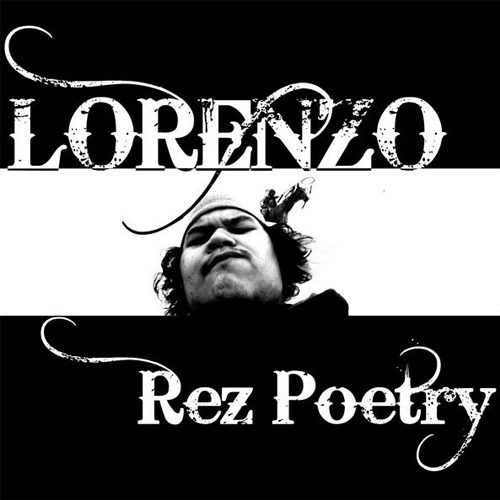 I came across Lorenzo and his free digital EP “Rez Poetry” while rummaging the net for Native American hip-hop and ending up on ‘The original showcase for Native American and Aboriginal Canadian hip hop and rap artists,’ NativeHipHop.net. I actually prefer downloadable promo EPs because in a flood of free music the short format promises several things: 1) I can make my mind up more quickly, 2) the artist might just place quality over quantity, and 3) if it sucks I’ve wasted less time and bandwidth.

Lorenzo is, by his own account, an Anishinabe MC from the Little Saskatchewan First Nation located in the Interlake Region of Manitoba. “Rez Poetry” seems to be his first release. The download package contains 6 tracks and front and back cover. If you’re wondering (like I was) about the title, rez is short for reservation, apparently a common colloquialism regularly appearing in album titles, artist names and lyrics of Native rap acts.

As for most of us, this is foreign territory to me. I feel like I enter a minefield of stereotypes when trying to approach something I don’t even know how to address properly. First Nation? Aboriginal Canadian? Does that mean the term Native American is exclusive to the United States? And just how politically incorrect is Indian anyway? The best thing, which is certainly also what these artists would like us to do, is to treat their work like we treat any other rap recording. Is the rapper any good? What’s the vibe like? Who does the beats? How’s the mixing? What’s being discussed?

Lorenzo has two succint entries in his MySpace profile. He writes, ‘I make music sporadically,’ and under influences simply lists Johnny Cash & Grandmaster Flash. His EP is just as short and to the point. While you shouldn’t expect any turntable tricks from “Rez Poetry,” guitars substitute samples whenever David Hodges does the tracks. This makes for an intimate welcome on the opener “The One,” yet the raps and the drums bring the proverbial noise soon enough. Lorenzo wastes no time getting to the heart of the matter, asking, “So what do I have to offer that ain’t already been written?” The fact alone that he poses that question shows him to be an artist who actually thinks before he opens his mouth.

His tale as told on “The One” does sound similar to the ubiquitous hood stories, but stereotyping or not, that was kind of to be expected. He addresses social prejudice and police brutality as well as the abandon of his own adolescent years and the economic situation on the reservation, which he describes as “hardcore depression.” He connects “kids” in Iraq “bein’ killed by the president” (not sure if he means young American soldiers or Iraqi children) to “kids on the rez where suicide is evident / and politicians make it seem like it’s all irrelevant / till the next election comes, send us on the regiment.”

The sadness and anger hit you right in the face, especially when he notes that instead of him breaking the curse, “it just gets worse and worse and worse and worse,” yet as a song “The One” doesn’t stand still but looks both backward and forward, the notion of him being ‘the One’ taking on a proud tone towards the end. Another reviewer’s pick would be “What Becomes of the Broken Hearted?” Starting off on a ’90s pop note with sampled drums and wistful female vocals, the song has only one verse, but one which highlights Lorenzo’s ability to develop a train of thought. And as simple as the lyrics are, they convey true emotion:

“This is goin’ out to those departed
from a life so young it was barely started
and this is goin’ out to the mamas cryin’
cause her son’s gone home with the angels flyin’
No just reason, no denyin’
Hopeless feelings we confine in
the ones we love, the ones we trust
the ones who save us from the cusp
of the darkness when it falls
and light our lives like the shining stars
the ones who guide us through the seasons
the ones who give us rhyme and reason
the ones I truly do believe in
who give me hope in time of treason”

The rest of the tracks are still a couple of verses, hooks and song ideas away from completion. “Divine Beauty” intially shapes up to be a beautiful song itself with a clear guitar accompanied by a soft flute, but the rapper finds himself stumbling ahead of the beat’s pensive pace in his eagerness to express his emotions towards the object of his admiration. “Fly” mixes hard drums and delicate guitars similar to “The One,” only that this time Lorenzo’s delivery is less intense and even alternates with singing. This too is a song that starts out on a depressing note, the rapper “feelin’ like a bird in a cage burdened with rage / I picked up my pen and started hurtin’ the page.” But writing proves to be therapy for his tortured soul, so that things eventually begin to look brighter: “It’s a good day to live but I was ready for the opposite / alone I lived this life like nobody was watchin’ it / but now I see the positive and try to carry on / with the spirit of my people on my back I’m feelin’ strong.” Producer David Hodges closes the song with a verse of his own, which concludes their collabration.

The remaining tracks, both produced by Daybi, make less of an impact musically. “Lonely Road” is a disjointed affair with synths and singing that that are just a bit too off-key. Nothing new happens lyrically either, the closing one-verser “You Win Again” dealing with heartache.

I don’t regret investing a little bit of time in Lorenzo. Recorded in his home studio, “Rez Poetry” is direct, raw, emotional. With his vocal tone somewhere between Sen Dog and Baby Bash, Lorenzo can convey both rebellion and resignation, and his writing, flows and choice of beats show him to be a serious rap artist. It would be nice to hear from him again.