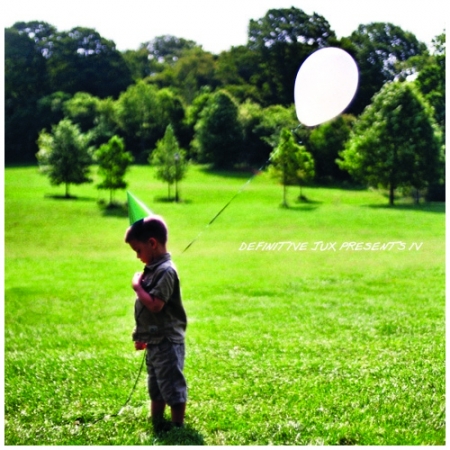 It’s a little perplexing to consider that it’s been over five years since the last Definitive Jux installment hit store shelves. A lot of things have change in the half decade since, and not necessarily for the better, including the death of Jukie legend Camu Tao on May 25th of last year. Appropriately the second track of “Definitive Jux Presents IV” embraces his memory by including the song “When You’re Going Down,” which is also a bit of a teaser for a posthumous album due out later this year being put together by El-P. Tao’s track here is self-produced and intentionally or otherwise it’s a bit rough around the edges musically, and he sings to boot:

Given the limited amount of original Camu Tao music that can be released after his death, beggars can’t be choosers, and when I say “intentionally or otherwise” that’s worth closer inspection. For those who weren’t up on Definitive Jux in the last ten years and weren’t exposed to any of their compilations during the hiatus of the last five, this is a crew of musicians who are likeminded when it comes to being unconventional. They don’t do the same kind of rap music everybody else does. Calling it “futuristic” would be far too simple, and implies that this is somehow what the rest of hip-hop will evolve into in the future. I honestly don’t see any chance of that happening. It would be much better to consider the Def Jukies visitors from an alternate universe Earth X, where all rhymers and artists are blessed with superpowers from birth. That’s how I envision Despot when he raps on the E*Vax produced “Look Alive” – walking through the swirling terrigen mists straight into our present day reality:

“Don’t look now, now or now either
But here see hear and speak evil
He’s fear itself dressed as people
Sum of all equals, hi pleased to meet you
Come and get beat to each punch you throw got
softness better known to clean a whole clock
More chips on his shoulder than the ol’ block
Short distance to go to where the buck stop
[…]
Listen, Hell is one hell of a town
You ain’t on your way out, better change up your route”

The unconventional Jukies form their own supergroups at will for any reason with no excuse. One moment they’ll be busting raps over a smashing and snapping Aesop Rock drum track as Hail Mary Mallon (Rock, Rob Sonic and DJ Big Wiz) on “D-Up”, the next they’ll be spitting “Reports of a Possible Kidnapping” as the Weathermen (Cage, Aesop Rock and El-P). Some members still manage to maintain their own form and function without being transmogrified though. Absurdist Yak Ballz explores a “Gas Galaxy” created by Chapter 7, traveling at speeds of thought that are unimagined by Kool Keith. El-P flows over his own production on “How to Serve Man (The Meanest Things I’d Never Say)” opening his rap with words suitable for a horror movie:

“That’s not a hand, it’s a claw
And this is not a song, it’s an exorcism of numbness
We are not in my bedroom any more
It’s a prison camp that I’ve been stuck in
This isn’t skin, it’s a scramble suit with a thousand me’s rotating
That’s not your mouth, it’s a boredom generator, powered by irritation”

Incidentally if you’re not familiar with scramble suits, I recommend “A Scanner Darkly” by Philip K. Dick, a sci-fi take on a dystopian future of drug users and pushers. Coincidentally “How to Serve Man” is an ideal final track for both this album and review because it serves as textbook example of the type of shit Jukies are on – references that could easily be obscure to a majority of the people exposed to it. The Definitive Jux collective don’t just cultivate a cult following, they purposefully exclude anybody who isn’t willing to get on their level from joining it. If the axiom that the effort is worth the reward has ever proved true though, albums like “Definitive Jux Presents IV” fit it. This is not an easy album to listen to, because there are no comfortably cliched rap phrases or familiar themes of conspicuous consumption, and no conventional dumbed down beats to hear them over anyway. Everything is taken to a new plane of existence that’s so high above ground you may need to come down between spins for a lungful of oxygen. It may be too much for most but for me I offer this toast to the Jukies – well done, and long overdue. R.I.P. Camu Tao.