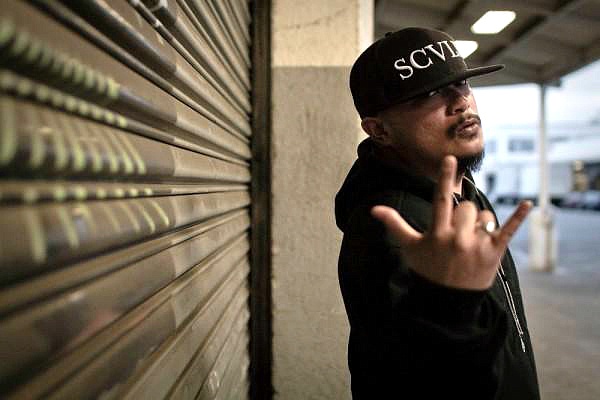 Although many of them haven’t hit the mainstream airwaves yet, the Bay Area has been producing some of Hip-Hop’s most talented artists for years. Jern Eye has seen this both as an insider, as a current resident of Oakland, and an observer, as a former resident of the Bay’s southern counterpart, LA. Jern, who in addition to being a solo artist is a member of the group Lunar Heights, has earned a spot among the Bay Area’s Hip-Hop elite and on October 13th he’ll be releasing his second full length solo album, Vision

. Today (Sept. 1st) the first single from that album, “Get Down” b/w “So and So” featuring Guilty Simpson, was released to radio and RapReviews caught up with Jern Eye to find out more about his music, how many hours without sleep it would take to cover the entire Bay Area Hip-Hop scene, and why if you see a girl on his arm it’s highly unlikely that she’s a Hip-Hop head.

Adam Bernard: Start everyone off with some basic info on yourself. How did Jern Eye become the artist he is today?
Jern Eye: Growing up in LA I was exposed to the underground scene, specifically the old Unity shows, as well as a lot of the artists from around the world who were being brought into LA. In high school I’d sneak out in my dad’s car before I even had a driver’s license and hit up these shows. I think being around the scene at that time really inspired and helped me jump start what I wanted to do with myself in terms of being an artist and being an emcee. I think the Bay Area has a lot to do with it, too. The overall consciousness of the people out here, the kind of environment it is, really helped with who I am.

AB: How do you think all that’s wrapped up and represented in your music?
JE: I would say a lot of my rap style is inspired by being raised in LA, while a lot of what I talk about and a lot of my personal experiences come from life out here in the Bay and the dynamics of the people here.

AB: So you’re a little bit of both.
JE: A lot of both, actually.

AB: There are a lot of dope artists coming out of the Bay Area now. I actually feel like I should move there. What are some of the unique qualities your Hip-Hop community has that make it so great? Is it something in the water?
JE: I would say it’s just the history out here. There’s always been a strong independent scene here in the Bay. It’s very conducive to creativity. It’s so tight knit and small that you eventually end up working and building with a lot of other artists out here. It’s very community based. You don’t go being out here in the scene without either getting a chance to work with another artist or doing a show with another artist and/or breaking bread with another artist. It’s a double edged sword, though. The independent scene is very dope, but at the same time it almost feels like there’s a glass ceiling. A lot of people gain success on a small level, but on a grander scale it really requires the artist to have opportunities to break out of the mold and touch other places. That’s kind of the challenge, but that’s also the blessing that artists have out here.

AB: Since it’s a small scene and a community scene, if I were to head out there, how many ours straight without sleep would I have to go before I met everybody?
JE: {*laughs*} Probably one night, depending on the night. We just recently had a benefit for RasCue, he’s one of the local DJs who’s been a staple out here. He had some health issues and a couple of organizers managed to get all the groups that have been making music out here for years together for a show for him. That’s a perfect example. Any given night like that it can pop off and you’re in the same building as Hieroglyphics and a host of other local artists out here.

AB: That’s fantastic. If there wasn’t a show like that going on, though, would I have to rent a car to do the whole “see the entire scene in 24 hours” thing?
JE: Yeah, you would probably need to rent a car. You might be able to touch a couple bars down in Oakland and make your way into the city and touch a couple clubs and catch a couple shows. Most of the scene pops off in the city, but a lot of East Bay and Oakland natives that typically play out to the city, they found homes playing in the uptown district. The uptown’s crackin again and it’s a whole new kinda night life rebirthing itself in Oakland. They’re really trying to re-stimulate the economy out here by recreating the night life in Oakland. “Authentic Vintage was really raw. It was hot off working with my group Lunar Heights and it just kind of made itself.”

AB: Sounds like a fun way to do it. Moving to your music, I really dug Authentic Vintage, which was your 2006 solo debut, and now you’re readying the release of your sophomore effort, Vision

. What aspects of Vision will be different from Authentic Vintage and which will be similar?
JE: Authentic Vintage was really raw. It was hot off working with my group Lunar Heights and it just kind of made itself. I was heavy into producing beats at that time and I just didn’t really quite have the avenue to shop them to other people, so being an emcee, as well, I would just write to a lot of my own production, get into the studio and record, and the album kind of developed itself. Vision

was more of a conscious effort. I really sat there and was like OK, it’s time for me to make another record. I went through a process of a couple years of recording material and then my boy Kareem (Nightclubber Lang from Boom Bap Project) came into the picture and decided he wanted to help executive produce the record. He got me connected with a lot of producers that I never saw myself working with. I had the opportunity to meet Illmind while he was out here and Jake One and before you knew it we started crafting this record. It was a concentrated effort, it was a conscious effort, a lot of real thought went into the process of making this one where Authentic kinda just made itself by chance.

AB: Authentic Vintage was on NatAural High, but Vision is being released on MYX Music Label. Why the label move?
JE: The label move came out of opportunity. Like I said, I was making some material prior to actually signing the deal with MYX Music Label. That material kind of presented itself as a demo as to what Vision

would be and the deal was put on the table. NatAural High, they went through a lot of internal changes and their vision for their future wasn’t exactly clear to me. As an artist you always want to move forward and keep striving to take it to the next level and it just seemed like with MYX Music, the experience with Kareem running a label and his experience as an artist on Rhymesayers, it just seemed like the right move. It seemed like this dude really knows what he’s doing in terms of running a label and how to make an artist successful.

AB: What’s going on with Lunar Heights right now?
JE: Lunar Heights is good. That’s my family, man. Living out here we hang out on the daily. Khai is always at my apartment, we always hang out and we’re always making music together. Lunar Heights has representation on theVision

album. A couple years ago we cut a whole new album with DJ Vinroc and it never got released, but a lot of that material ended up on this new mixtape that I just finished. We’re gonna put a download link up for it and give it out to the people. Spear, he went ahead and started a family. He’s got four kids, so he’s doing the teaching thing and raising his kids. He’s still recording music, too, though. Spear, man, he’s the golden child. He’s always been the dude that’s kept me on my toes and kept me sharp. We were roommates when we first moved out here to the Bay and we’d always write music together and just really helped develop each other. He really helped me grow and I think our friendship kinda transcends the music. We’re all still family.

AB: Finally, you can admit it, how often do you pop one of your own CDs in and ride around to it?
JE: Not too often, mainly just when something is fresh out of the studio. When I first cut a track I’ll definitely play it for whoever’s rollin with me. If I’m rollin dolo I listen to a lot of my own stuff just to get a gauge of how I want it mixed, or if it’s the finished product, just to hear how it sounds from beginning to end and how well it flows. Mostly it’s just to test it and see how it makes me feel.

AB: So you don’t make sure to have one of your own albums playing when you go to pick up a date?
JE: No way. If I meet a girl I rarely present myself as an artist. If it comes up I’m like yeah, this is what I do. I don’t want to really blow it up and make it a big deal. I like dating the non-Hip-Hop girl from around the way who has no idea who’s in the scene and what I do, the more innocent type who’s completely clueless of my world.

AB: So what you’re saying is you’re dating the bank teller.
JE: {*laughs*} You’d be surprised how many bank tellers actually know the scene. More like the bookstore girl, or the little coffee shop girl.