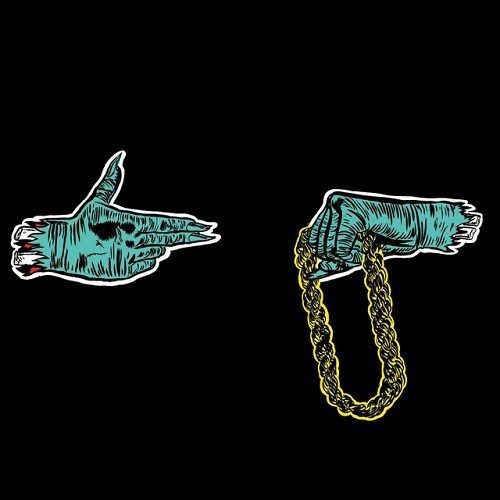 Killer Mike’s El-P-produced “R.A.P. Music” was one of the last year’s strongest albums, going neck-in-neck with El-P’s own “Cancer 4 Cure.” They brought out the best in one another: El-P’s beats seemed to get Mike away from the Southern gangsta rap cliches he sometimes wallowed in, while Mike challenged El-P to move in a funkier direction, adding some swing to his often brutal beats.  The two rappers toured together, and somewhere along the road decided to make an album together. “Run the Jewels” is the result.

The fact that “Run the Jewels” exists is remarkable on several levels. For one thing, rap collabs are prone to never making it past the idea stage. Remember the Juelz Santana and Lil Wayne album? Or the Ghostface/DOOM album? Or “Madvilliany 2?” Then there is El-P’s track record. In the two decades he’s been rapping, El-P has released exactly four vocal albums: the first Company Flow record in 1996, “Fantastic Damage” in 2002, “I’ll Sleep When You’re Dead” in 2007, and “El-P: Cancer 4 Cure” in 2012. Granted, he’s done a lot of instrumental albums and production, but when it comes to stepping up to the mic El Producto takes his sweet time. To go from an average of five years between albums to less than twelve months is pretty remarkable.

That shortened time-frame shows in El-P’s lyrics. He is one of the best lyricists in hip-hop, spinning intricate, complicated rhymes that play out more like short stories than rap songs. That El-P is not really present on “Run the Jewels.” This isn’t an album that he has obsessed over for years alone in his studio. This is a true collaboration, a project between two friends trading bars. The album has a loose feel, with most of the rhymes dedicated to shit-talking, like on the Big Boi assisted “Banana Clipper”:

“I move with the elegance of an African elephant
I presented the evidence eloquent as the president
Evident is the emphasis, I deserve a championship
But before I banana clip I’ma chill so my man can rip”[El-P]“Little man against hellion with a heart of an orphan
I got the words of a murderer and an eye for distortion
You take a slice of my portion I’ll take a piece of your profit
I drive at illegal speeds and keep an ounce in my pocket”

Most of the ten tracks on “Run the Jewels” follow suit. “36” Chain” has a chorus of “and I walk around like I got a 36″ chain.” The chorus of “No Come Down” is “I get get so high I close my eyes like I may die and I’ll never come down.” On “Get It,” Mike warns that “El-P will fuck a rapper’s life up like Mo’Nique did to Precious.” “Twin Hype Back” features an appearance by Prince Paul as sleazy pussyhound Chest Rockwell, whose pick-up lines include “you look like the type of girl I can really see myself artificially inseminating.” The majority of tracks here are funny and raunchy. Despite both MCs reputation as being very serious, they are having fun here, returning to the type of battle rap bragging that El-P hasn’t done since his Company Flow days.

The beats are all handled by El-P, and he’s splitting the difference between his usual futuristic funcrushed noise and the funky 808s he supplied Mike with on “R.A.P. Music.” The beats maintain El-P’s trademark harsh rattle, but have the swing he showed off on Mike’s album. Little Shalimar offers his guitar to several tracks, adding a very Pink Floyd guitar solo to the end of “A Christmas Fucking Miracle.” As always, El-P does an excellent job of melding old-school hard-hitting boom bap with industrial noise. If he’s made a shitty beat, I’ve never heard it.

They do get serious on a couple tracks. “DDFH” is a sequel of sorts to Killer Mike’s cop-killing tale “Don’t Die.” The chorus stands for “Do Dope Fuck Hope,” but it is meant ironically. They close the album out with the inspiration “A Christmas Fucking Miracle,” with the MCs rapping about childhood, and El-P giving his younger self some advice:

“The most impressionable minds get molested and informed by manipulating forces
Don’t fret little man, don’t cry
They can never take the energy inside you were born with
Knowing that, understand you could never be poor
You already won the war, you were born rich”

The album is being released for free by Fool’s Gold, although you can pay for a physical copy and/or weed grinder if you want to. This is the same label that gave away Danny Brown’s “XXX,” so they must know what they are doing. The price has nothing to do with the quality; this is some top shelf, Grade A fishscale hip-hop. El-P is already threatening to keep Run the Jewels going, so this self-titled debut is not the last you will hear of them. That’s a good thing, because this album is two veteran MCs going hard and loose, feeding off one another’s energy and pushing one another to step their game up. It’s definitely the start to a beautiful friendship.