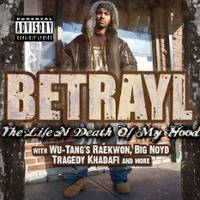 Betrayl :: The Life N Death of My Hood

Hailing from New Bedford, Massachusetts may make it slightly odd for Betrayl to describe his sound as “Queensbridge influenced,” but that’s exactly what his bio would have us believe. He’s certainly trying to live up to that in the guest list for “The Life N Death of My Hood” though – B’s got Tragedy Khadafi for “On the Streets” and Big Noyd on “No Love,” and it’s possible some of his other frequently appearing comrades like Dezrt, Booda and Q may be too. Finding information on them is an exhausting chore though, as is finding out much of anything about Betrayl other than what’s already mention – he hails from New Bedford and loves QB. Whether he’s talking about his Massachusetts hood or his adopted QB hood, he’s talking about “The Life N Death of My Hood,” your hood and every hood where criminology rules and the only school is the education of the street life. And speaking of “Criminology,” Raekwon the Chef drops in for “Untouchables.”

“It is hard to tell, Lex excel, burn a L
Then drive through the housing in a burgundy whale
I speak real street, slap meat, rap in a crack meeting
Build with the ‘Ricans on Dyckman and hit the deacon
Fly like the hood, Superboy Coke in my hood
I got two-for-fives, peep my 9’s, we good
Yves St. Laurent, she fainted when Shallah pulled up”

Much like I nearly fainted when I saw Raekwon on this disc. So who is Betrayl? He’s obviously got at least one or two connections in the rap game, and wasn’t afraid to use them for his CD, but what does that mean for the album as a whole? Let’s refer to his bio again. Betrayl is described as dominant on his local scene, so one has to imagine he’s well known among the approximately 100K people who live there. He’s also described as being frequently heard on mixtapes, except apparently the ones received by the people at RR to review. Hey I’m not trying to be sarcastic here, but so far 2 and 2 just don’t add up. The only way we can really get a clue on money B here is to dig straight into one of his solo songs such as track number four, “Where Were U”:

“Aiyyo the cash don’t stop, I’m back on the block
Fresh our of prison with a passion for guap’
I’m changin my friends, rearrangin my love
Third day home already bangin with thugs
In my fatigue shorts, back of my street thought
Heinekens to Hennessy, comfortin me mentally
Shorty got me lovesick, thought she was my destiny
Said we were soulmates she might be the death of me
Murderism, women, the world keeps spinnin
The sun keeps shinin, Allah keeps forgivin
My heart’s pumpin blood, money’s my true drug
You ain’t there when I was down and I don’t really need your love
Bein broke is hell, along with the street life
Gettin paranoid every time I see police lights
Cops on they street bikes patrollin in the hood
Long as I’m not locked everything’s all good”

Essentially Betrayl portrays his name by projecting it onto everything else around him – he feels betrayed by friends, loved ones, the hustle that put him on and the environment that made him what he is. “I’m all alone in this danger zone” quips B, and yet he’s only alone on three songs for his entire album – the one above, “We Can Make It” and “Marked For Death.” One would get the impression from this that Betrayl has little love for his peers, finding them to be untrustworthy, yet still forced to rely on them since he lacks the self-confidence to hustle on his own. That makes for a somewhat schizophrenic presentation, as Betrayl tries to sound confident, yet spends much of the time sharing the spotlight with the aforementioned rappers and other one time guests like P40 Thunda on “Princes of New B.” and Siahlaw on “Talk 2 Much.”

The most consistent thing about the entire album is the production of Engineer on 7 of the first 8 songs and Blunt with the same ratio for the last 8 plus the other one Engineer hadn’t done. A few songs like “Seen it All” stand out for their simple and grimy piano keys and bass, but in the end the idea Betrayl is heavy in the mixtape scene is apt. He strikes me as the kind of artist you’d hear on a Queensbridge joint and think “He’s aight but he’s no Cormega or Tragedy” and promptly move on. He’s got no killer punchlines, no memorable hooks, a few big guests, and a reputation in New Bedford. Is that enough to make it in hip-hop? It’s at least enough to get you a review, but I can’t recommend Betrayl that highly. He’s not great, he’s not terrible, he’s just your average East coast rapper whose dreams are probably bigger than his talent will take him. Only time will tell.