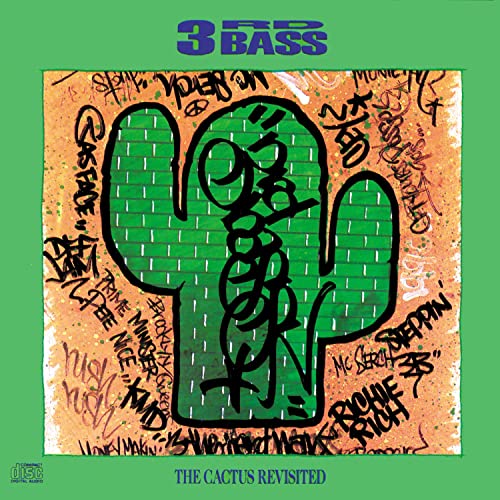 It pains me to tell you “The Cactus Revisited” is a pointless EP. That could be the entire review, but I’ll go ahead and explain why anyway. One year earlier 3rd Bass released “The Cactus Album,” a certified hip-hop classic from the duo of MC Serch and Pete Nice. Production by Sam Sever plus a few Prince Paul joints, and one by The Bomb Squad was the glue that held them together. We’d learn in subsequent years that the differences between the two artistically and personally would dissolve that bond. As a result of how short their career together would be, any remnant of that time together feels worth exploring, but “The Cactus Revisited” is a hint in hindsight that their union would ultimately fall apart.

“The Gas Face (Remix)” is as good of a place as any to start. MC Serch has spoken at length about his bond with the late Daniel Dumile, who was better known at the time as Zev Love X from K.M.D., so his absence from this “lyrical remix” feels like a slap in the face. As much as I appreciate Serch offering a moment of silence for Yusef Hawkins, I can’t help but think some form of disagreement between Nice and Serch resulted in Dumile not being included. If they could record new verses for the revisit so could Dumile, so the new version is interesting but SUBPAR compared to the original. The same can be said for Dave Dorrell’s revision of “The Cactus.”

You have to go three deep into “The Cactus Revisited” before anything of substance happens, and that’s the Sam Sever remix to “Wordz of Wizdom.” I don’t favor it over the original, but as a so-called “club mix” I can actually picture it getting people onto the dancefloor. It has the same kind of energy as tracks Sever would produce for his own group Downtown Science with Bosco Money, and it honestly wouldn’t have shocked me if Money had made a cameo on the song. I’m sure some clever mash-up artist could make that happen if they were motivated to do so.

Unfortunately no one would be because this album is ASS BACKWARD in so many ways. The version of “3 Strikes 5000” here is inferior to the one that ultimately wound up on “Derelicts of Dialect.” The bloated CJ Mackintosh & Dave Dorrell reworking of “Brooklyn-Queens” removes all of the whimsical charm of Prince Paul’s original version. The one lone shining star of this whole release is Marley Marl’s revision of “Product of the Environment.”

It’s in every way the opposite of 3rd Bass’ own “Steppin’ to the A.M.” remix that closes out this EP — a fun new take on an already good song as opposed to a poorly chosen one that makes matters worse. The more you listen to “The Cactus Revisited” the more apparent it becomes that 3rd Bass were already at loggerheads creatively about their direction, and as a result they resorted to trying to revise and re-release the material they had already done. It’s a feeble effort that aside from historical footnotes is best left forgotten, and should NOT be considered as indicative of the talents of Pete Nice or MC Serch individually or collectively. This is a swing and a miss.