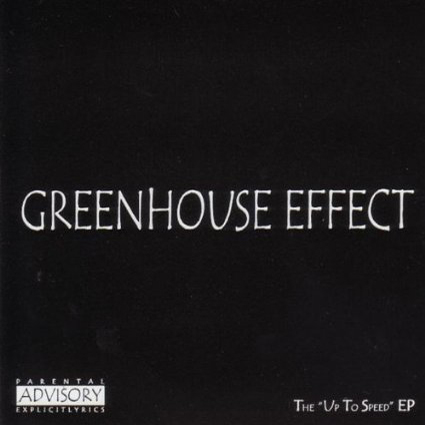 The Up to Speed EP

Greenhouse Effect :: The Up to Speed EP

Greenhouse Effect have been around for awhile, in fact this 14-song EP was originally released in 1999 but it managed to pass my way a few weeks ago. Honestly, why has it taken so long for a group this good to hit my consciousness?

There are three distinct voices within this Ohio-based crew, two of which are MC’s who go by the name of Inkwel and Manifest. Inkwel has a flow that could be compared to Sadat X, while Manifest seems to go off like Kool Keith’s genuine brother if he was down with the Pharcyde. Comparisons aside, both of them talk about their homes to show fans what it’s like to be living in the world they didn’t create. The two touch on everything from the frustration of life to the lack of interest in the ozone layer, and the power of capitalism, as heard in “Slave To The Rhythm”. They want to let you into their world, but as Manifest states in “The Innercity”, things aren’t pretty:

“I’m from the inner city, with the crack slingin’ black kids
rich people evacuated for breaks on they taxes
young ladies running streets like dogs with rabies”

Yet within their stories of hard times there are small glimpses of hope, for themselves and for the fellow man. They do this with serious and complex lyrics, as well as humor that shows how energetic these guys are. What I liked about them is that they’re not stuffing profanity in every line just to be hardcore, each line and verse shows much wisdom and intelligence, more than enough proof that they are ready to make an impact when it becomes their time. The difference in rap styles (Inkwel is bold and to the point, Manifest comes off as ruthless and out of control) works for them, complimenting each other without overdominating any part of their songs. “Performance Is Everything” displays their view of the hip hop game today, and what they plan to do to put their foot in the door.

The other voice in the group is producer Blueprint. While a lot of producers like to clean up their production, Blueprint mixes sharp production with a knack for extra-crackly vinyl, creating a soundscape that adds more depth to each song. Combine the best elements of DJ Premier, Cut Chemist, and People Under The Stairs and this is what Blueprint is all about. I’m catching jazz, exotica, and even some Indian music within the mix. I hope when a full length album is underway, they’ll release an instrumental version right next to it.

Together, they offer a 14 song EP that works in every way that it should. Tight rhymes, great music, awesome production: it makes one wonder why Greenhouse Effect aren’t more well known.