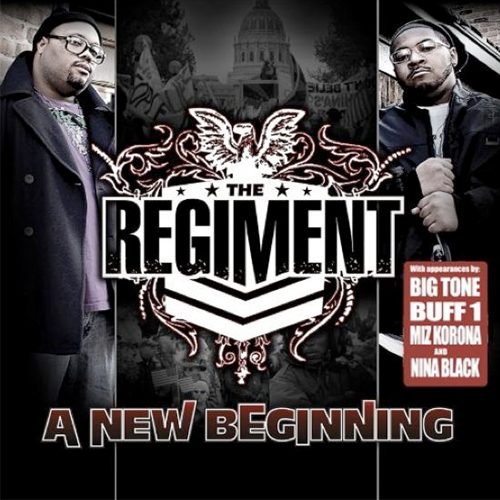 The Regiment :: A New Beginning

The Regiment first caught our attention in 2007 when Jesal Padania took the time to review their debut album “The Come Up.” Jay Soul was impressed by the musical and lyrical direction of kids barely out of their teens who made up the group including O.S.I. on rhymes and The Arch-E-Tect on the wheels of steel. By turns Mr. Padania compared them to both the late great J Dilla and perennial RapReviews favorites Little Brother. That’s high praise indeed given they were fresh to the scene, but his evaluation of their talents only got higher as the review got longer. By the end Padania was quite effusive in praise of their abilities:

“It is a beautiful thing to see two young MC’s shoot for the moon with such abandon â€“ they haven’t landed yet, but if they can improve gradually, year on year, they COULD be bloody good by their mid-20’s. More than this, they are trying to make good music, and in swimming against the tide, deserve some praise for at least trying to go with what they love. They have a long, hard road ahead of them, but time is on their side â€“ although any future sophomore LP from The Regiment should find them stamping their own personality in a more meaningful manner.”

The young men of The Regiment have only had a couple of years to age since we heard from them last, but the talent that Padania found in their debut is still on loan from God as we return for that much anticipated sophomore LP. While the group declares this album “A New Beginning” it’s fair to say they’ve more or less picked up right where they left off. Taking a stab at the random button produces surprisingly pleasing results, as every song reveals another hidden gem that only needs more exposure from critical light. Take the Apollo Brown produced “They Don’t Know” for example, laced with multiple layers of horns, keys and strings that compliment each other perfectly:

“I can remember (uh-huh)
Growin up poor January through December
Thinkin there’d never be an end to (yeah)
the pain and the stress, the struggle and these rainy days
Never really thought that I could enter
the game with these wannabe thugs and killers
So many times thought that I would give up
But pops came and said ‘Dawg keep your chin up’
Cause see he was a rook, I was more like a bishop
He held the four corners, I just played my position
Tryin to cut angles to get by opposition
Gettin out the hood, yeah baby that’s the mission!
But it ain’t easy – I let the streets be my witness
Imagine me spittin somethin other than realness”

Let alone imagine someone spitting something else that clever on the same beat – chess metaphors even GZA would be impressed by. Finding things to be impressed with is not hard on “A New Beginning” though. Hitting random again we stumble onto “Bounce,” a track which embodies that J Dilla sound Padania was referring to. Not surprisingly the song is produced by a man named Pig Pen from Lincoln Park, MI.

“Uhh, I got my microphone check
Tall slick and fresh and yes I guess
You can label us one of the best, so be cautious
Peace to my conscience, givin me light
Speak though of bread when I write
Kryptonite to the thieves in the night overseen
for real now back up off this team, flame on kerosene
Stack cream, style mean while I fiend on the mic
Bright lights scar stereotypes”

There’s nothing simplistic about the bars of The Regiment. They purposefully stack their rhymes between bars, challenging you to follow the flow, and rewarding you when you do so with superior punchlines and compelling storytelling. One more time let’s hit that random button and see if The Regiment can hit the jackpot – and by coincidence we land at the end of the beginning as Regiment vow to “Take it Back” with a little help from Apollo on the boards:

“I’m tired of the madness, tired of the sadness
The views of the fascists, following the masses
Acting like we still got slavemasters
Now average becomes common practice

I’m tired of being tested, tired of being questioned
Being labelled second, played and rejected
Neglected, by these fake gangsters
Claim they hold figures, say they hold triggers
CAN I GET A WITNESS?”

I’ll testify! I’ll do it time and again because “A New Beginning” wins over and over. Songs on this album actually live up to their titles. “Old School Vibe” takes you back just like the lyrics say on the track to “that old school Pete Rock and C.L. Smooth, but mixed with a twist of that Lupe cool.” While a song title like “Humble Arrogance” may seem contradictory, the backwards notes fit the concept perfectly as Regiment and their guest Miz Korona define it perfectly – “y’all dudes two steps behind, I’m movin in light years.” If you’re that far ahead of the competition, you SHOULD be arrogant even as a God fearing man, because it’s not arrogance when you can back it up. “Cocky ain’t the word, my dude I can’t lie/I’m arrogant, it’s true, you too if you was I!” That’s WORD son. At some point there’s no point to giving you more examples, because unless you want to be the aforementioned two steps behind you should have already put the mouse down, turned your monitor off, and gone to the store to cop this album. Can’t find it outside the 313 area code? Then turn it back on and cop it online. Do not wait. For once Jesal Padania may have actually understated his case. They’re not only J Dilla meets Little Brother, they’re De La Soul and Royce Da 5’9″ thrown in for good measure.