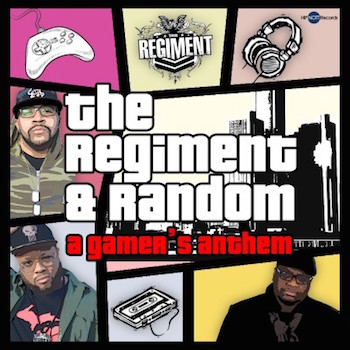 The latest definition of rap supergroup comes to us courtesy of the Detroit based tandem of The Regiment and Arizona-by-way-of-Philly favorite Random a/k/a Mega Ran. If you know the latter you may be saying to yourself “Another release from Random? Already?” Well no – if you knew Ran you WOULDN’T be saying that. Even though he’s more prolific than the fatalistic Tupac Shakur in his prime, he’s putting careful quality time into each and every project he’s on.

This time Ran is splitting the duties with O.S.I. and IseQold, which gives him even more creative freedom, as Ran doesn’t have to worry about holding down so many of the different areas of putting together and album and releasing it all by himself. You can tell the feeling was mutual as everybody involved is having fun with tracks like the DJ DN3 produced “Step Up,” which makes liberal use of one of the theme songs from long-running game show “The Price Is Right.” They’re not trying to disguise this fact at all – even mocking the catchphrase “come on down (you’re the next contestant)” on the song’s hook.

Ran: “Question! Do you wanna be a star?
Do you want every record label to know just who you are?
You wanna get on MTV, wanna wear an Audemar?
Well you gotta play my +showcase+, give me your credit card…
Sell a hundred tickets, pack the club with all your friends
And if you win you can come back next week and do it all again”

For such a fun bouncy track it’s an insightfully cynical rap about how up-and-coming artists get taken advantage of while trying to get exposure. Perhaps the first single “Kung Fu Treachery” is a little lighter slice of life, even though the heavy bass and whistling melody will dice you up while you’re bobbing to the beat.

The Regiment crew vow to “brass knuckle your earlobes” on the song and deliver on the promise – it’s some hard hitting hip-hop. The only downside of The Regiment x Random that I can really report to you is that there’s just not ENOUGH to go on! It’s not as though they are shortchanging the song length – in fact the El Huervo produced and accurately titled “Vent” is over six minutes in length. This really is an EP though – it’s only six tracks and 27 minutes in total. At that length and depth it’s almost a cocktease – just letting you get used to the idea and then pulling back when you’re warmed up and ready. I suspect most listeners are going to want to put this one on loop and keep the sound going for a while longer.