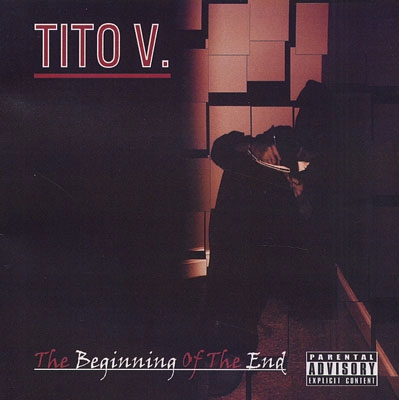 Tito V. :: The Beginning of the End

A writer’s pipe dream is to complete a book, send it to various publishers wrapped in butcher’s paper, it being discovered, both critically and publicly, as the elusive great American novel. Rappers have the same dream, similar to the plot of the film “8 Mile.” Enter Tito V., a teenage Hispanic emcee from Alpharetta, GA, who wrote and produced “The Beginning of the End” in its entirety. It is admirable for an aspiring artist to actually get a project released rather than just lazily let the dream slide by, but does this LP establish Tito as the next big thing?

Tito V. opens the album with the aptly titled “The Beginning,” which is book-ended by the concluding track “The End.” Here he introduces himself over a beat that seems influenced by 90’s hardcore West Coast gangster rap music. He sets the stage by rhyming in an angry demeanor with lines like, “I cause distortion in the biggest of proportions/I won’t give you a chance to live like abortions” and “I hear them screaming as they hit the floor/I’ve sold my soul to the devil, now I’m back for more.” It’s not all tough-talk though. Tito delves into to some deeper thematic issues that carry out through the narrative of the disc like free thought (not the label but the form of expression) and societal problems.

“Last Laugh” sounds similar to “The Beginning” with its high-pitched piano keys and menacing landscape. Tito V. focuses on how he runs the rap game in his lyrics on this one. It is a solid song, one that Tito personally considers as an essential cut, yet it starts to point towards a fault on the disc â€“ that being the repetitive content.

While songs like “I Saw My Life Flash Before My Eyes” and “Nino Guerrero” successfully reach a higher conceptual level, the production is stuck in the proverbial mud. Further, on the former, Tito V. oversteps his musical capabilities by semi-singing the chorus with ill effect.

One thing that differentiates Tito V. from the average Joe is his bi-lingual ability to swiftly transition into Spanish. Of course, whether this strength helps the overall product depends on the listener.

“Marching” may not be the most accessible joint on the CD (that would probably go to the hook strong “I’ve Got Your Back”), however it is possibly the crown jewel. It sounds like Tito V. was heavily into Immortal Technique at the time he penned it with lyrics like:

“I preach the words of a mouthless man dying to speak
The fulfillment of America we’re trying to seek
This ain’t about black and white, this about class and self
Destroying dreams of poor men dying for wealth
Abandoning a sick woman dying for health
Or an African aids victim that’s crying for help
In his hospital bed a third world soldier
Getting closer to death every time his heart grows colder
Distorting your opinion their destroying your views
That’s what happens every fucking time you turn on the news
They the devil in disguise, it’s too obvious…”

And the scathing worldview continues. The criticisms seem all the more effective, as Tito V. rhymes so emphatically and with a tinge of disdain in his voice.

The guest spots on “The Beginning of the End” are minimal, thus sticking to that notion that this project is a personal conquest. Castizo, Alejo el Chavo, and Cross Jones add their vocal when they get a chance. Each collaborate with the main artist well. Cross Jones is the strongest addition, especially on “Pushing Back,” on which he spits venomously in an almost schizophrenic nature.

Ultimately the “Beginning of the End” is not the unknown classic that true hip-hop fans endlessly dig for. It is however a jumping off point for Tito V. He is sometimes lyrically poignant and his production ability is decent albeit a bit monotonous. If you are looking for some rap music that strays far from the lollipop commercial rap on the airwaves, you might want to give this album a listen.

Tito V. :: The Beginning of the End
6Overall Score