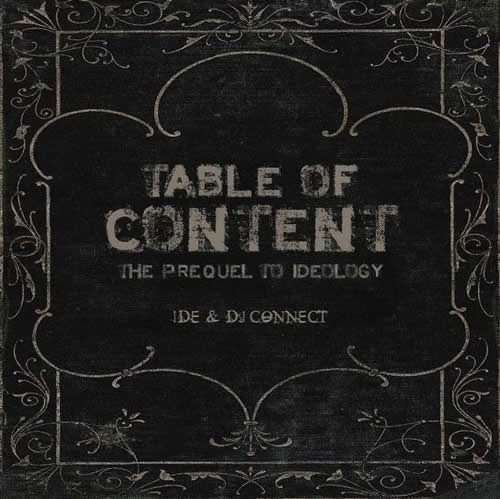 IDE and DJ Connect :: Table of Content – The Prequel to Ideology

It’s hard to fathom a prequel when you haven’t heard the original let alone any sequels, but here we are with IDE and DJ Connect’s “Table of Content – The Prequel to Ideology” anyway. Off the top the album’s title is bothersome to anyone who reads prodigiously, because never has a single tome been published with a “table of content” in it, nor would I want to read one. A book with only one chapter in it? That would either be a short story or an essay – and you certainly wouldn’t need a table of CONTENTS to describe that. Thankfully there’s more than one chapter to this rap album – there’s 19 to be exact – but it’s still an annoying attempt by the auteurs of this album to be clever which ends up being exactly the opposite.

From IDE’s bio we learn that “The Prequel” is intended to fall between his first album “Force Fed” and his new album “Ideology.” The curious thing is that said bio describes “Ideology” as a much anticipated release, which would suggest “The Prequel” is NOT anticipated at all, unintentionally dogging the value of the album before listening to it. Why would anyone buy this and not “Ideology” instead? Perhaps DJ Connect is the reason, but his role on this album truly seems to be “disc jockey” as opposed to producer of hot tracks. That’s not to say he doesn’t provide a banger or two – I like the slapboxing style funk of “God Complex” featuring Hell Razah and the whistling melody meets growing bass construction of “I Think” – but Connect does not produce a majority of “The Prequel.” Duties are split up between a long list of different names who each try to give IDE the best banger to flow on, the best of which is “Live On.” Ugly Tony defies his moniker by providing a beautiful backdrop, and while I Am Many does a nice job as guest star, it’s the Vinnie Paz-like rap of IDE that holds the violin and acoustic guitar sounds down:

“Across the crooked bridge, I couldn’t sit still, I wouldn’t live
if this ink and the pad didn’t exist, and couldn’t give
a shit what length I’d have to go to get it in
Cause I’m sure to go the distance, I’m up, let it rip
I’m knowin this is my ticket, so no time to chill
I’m buildin, my mind is still achievin a higher status
And I happen to feel alive rappin, so in the lab I stay
As passion plays, the magic waits
for me to gradually craft and graduate to next level
While devils cast away”

IDE’s flow is disjointed, complex, but never off the beat or out of breath in delivery. When he vows that writing rhymes “is often all I find that keeps me alive” it’s hard to doubt him, as this is a rapper who clearly lives for his chance to pen a classic. The drive, intensity and enthusiasm make him doper than average but he’s still hovering on the borderlines for most of this album, so deep in concentration that he overthinks the very art he’s trying to create, eschewing the use of punchlines that might break up what tends to become a monotonous pursuit of excellent. Ironically one of the album’s better tracks is the slow, dripping wet Al Tarba melody “Reconstruct Your Design,” which would actually be good advice for IDE. Instead of yelling every rhyme into the mic like it might be your last, take a step back and try being a little less intense.

On the whole “The Prequel” is not a bad album, but neither IDE or DJ Connect can be said to distinguish themselves from hundreds of similarly well connected New York underground rappers. In fact when examining the list of guest stars appearing on “The Prequel” one can imagine Hell Razah, Reef the Lost Cauze, Jise (The Arsonists) or Planetary (Outerspace) dropping a similar album and having IDE as a guest rapper on it, and it would probably get the same score as this one. None of these people are whack, neither is this album, but when I think back on 2009 the overflowing “Table of Content(s)” listed on this CD probably won’t get any bookmarks from me. IDE needs something more to step up from New York’s underground than sounding like a lesser Vinnie Paz.