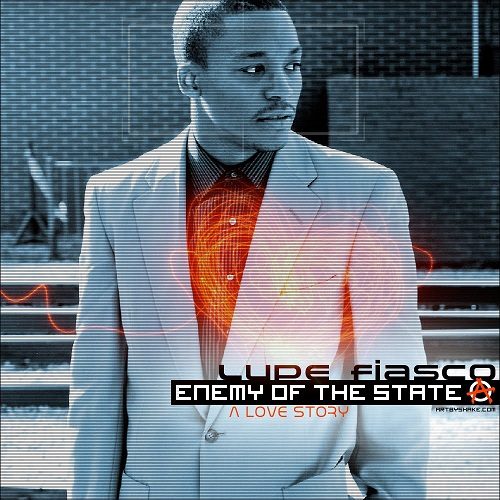 Lupe Fiasco :: Enemy of the State

There was a football player (soccer to you Yanks) who was prominent within English football throughout the 1990’s by the name of Andrei Kanchelskis, a Russian chap. He made his name as one of the core players of Manchester United, flying down the right hand side of the pitch at a frightening speed, somehow maintaining control of the ball and helping to win his team to win their first championship title after a two-decade drought. He now seems to have been almost completely forgotten but he was a key ingredient in helping to change both the fortunes of his club, and also the game of football â€“ it became a lot quicker and athletic thanks to ultra-fast players like him, and ultimately more exciting.

Which brings us to Lupe Fiasco. Sometimes you get the feeling that the Chi-Town native hates the fact that he was born into this era, one where he is forced to trade in a currency out of sync with the 1990’s supply of genial music, lyrics and concepts. He is constantly swimming against a tide of â€“ let’s face it â€“ bullshit, where creativity is a word said with contempt by record executives attempting to craft indelible chart-topping singles by any means necessary. To his credit, however, he has led a crusade against the dumbing-down and found favour, and huge levels of support, within the hip hop community â€“ all without much need of a gimmick.

If, like in the boxing world, hip hop has been facing a drought of undisputed heavyweight champions for much of this decade, then Lupe has carefully been adding the pounds in order to win as many weight divisions as possible, before making his assault on the most prestigious title of all. He came with a trio of incredible mixtapes, plus some notable guest appearances; his first album “Food & Liquor” may have been plagued by leaks and piracy but was still a brilliant debut; and his second album, “The Cool,” contained a chart-topping anthem (“Superstar”) that pretty much summed up the entire decade, alongside jaw-dropping displays of rapping ability. His third LP is due within weeks, and he is dropping some audible treats our way once more, this time in the form of a 22.5 minute one-track mixtape “Enemy of the State.” And oh my gosh it is good to have him back.

Compared to the moronic and, let’s face it, low-brow nonsense of 50 Cent’s “War Angel LP” â€“ which was really a free mixtape (with original production) in the build-up to his colossal failure named “Before I Self Destruct” â€“ this short dose of lyricism is a much more satisfying amuse-bouche. Rhyming over some notable instrumentals filched from artists such as Radiohead, Jay-Z and the Clipse, he demonstrates precisely why he is so highly regarded, with tongue-twisting internal rhyme schemes, metaphors aplenty and a healthy new injection of deserved cockiness. Occasionally he puts on an almost Eminem type of weird vocal effect (let’s hope that doesn’t make it to his third album) but otherwise the beats are smart, the rhymes superb and overall this is a lovely way to whet the appetite of fans.

Back to Andrei Kanchelskis… As he aged and lost some of his dynamism, he was jettisoned by Manchester United, and transferred to Everton. When talking about his new signing, then manager Joe Royle talked about players that excited the fans, and he made a point that I have never forgotten since. He said that the 40,000 fans that packed the stadium every week usually looked at most players and thought “If I trained really hard, I could probably do almost as well as him.” But when they looked at rare players such as Kanchelskis, they recognised something special, something they couldn’t replicate. He could do things on the pitch that they could only DREAM of. And that is how Lupe Fiasco makes 99% of hip hop fans, and even rappers, feel. He is so talented, that YOU reading this could not possibly dream of rivalling. He makes YOU feel like a fan, not a critic. He makes YOU feel that hip hop is alive and well. And thank goodness that he is motivated, lean and approaching his fighting weight â€“ it bodes well for “LASERS.” He even points out, impressive though the mixtape is, that these rhymes weren’t even good enough to make his album â€“ if that is true, then Christmas will come early for hip hop fans the world over.