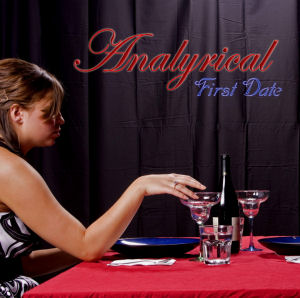 The cover of “First Date,” the debut album by Minnesota rapper Analyrical, isn’t that inspiring. So imagine my surprise when I put this on and was greeted by opening track “The Sky Is Burning.” The beat is a built around a guitar riff, and Analyrical attacks the mic with an aggressive flow that manages to be confident without trying too hard, declaring himself mad liberal and a fan of Chipotle in the same verse.

The production is strong throughout – Producers B-Mc C, Arsenic T. Larsen, Dmitry Killstorm, Ecid, Katrah-Quey, Spanphly, Orikal, and Vividend all contribute beats to the album. I was surprised to see so many different producers in the credits because all of the songs have a similar jazzy feel to them. Listening more closely you can hear that Arsenic’s beats are both built around guitar lines and Katrah-Quey’s beats both lean in an R&B direction, but the songs all work well together. It’s a good sign for hip hop when you can have seven unknown producers on an album and all of them are making above-average beats. Their beats are the real strength of the album, carrying Analyrical’s rhymes over fourteen tracks.

I could tell Analyrical was from Minnesota even before I heard “66612,” the shout-out to his home town. He doesn’t throw a bunch of “doncha knows” or “golly you betchas” into his rhymes, but his style and subject matter is as much of a giveaway as the Minnesota accent. Like fellow MN mainstay Atmosphere, Analyrical’s rhymes are a combination of personal stories, shit-talking, and partying. Like most Minnesota hip hop, it has nothing to do with East Coast crack rap, Southern trap rap, or West Coast Gangsta rap. He’d rather rap about his girl troubles than play up life on the streets, and unlike Jay-Z, one of Analyrical’s 99 problems is definitely of the female persuasion. While he is drinking champagne on the cover of his album, his version of partying is more like having some beers while listening to hip hop at an open mic at a local club rather than ordering bottle service at a strip club. In short, this is dude rap, made for, by, and about dudes.

For the most part he is honest and checks his cockiness, although his inner douchebag rears its ugly head on a few tracks. Maybe I’ve just been watching too much “Jersey Shore,” but when Analyrical drops a line like “You can bring the beef, bitch, I leave it tenderized,” or “I’m from 66612 if you don’t like it bitch, fuck you,” you expect his next line to be “come at me, bro!”

Those criticisms aside, “First Date” is a promising debut. Analyrical shows off some skills on the mic, and he’s backed by a solid team of producers. Fans of MN hip hop and/or dudes should give Analyrical a listen. Let’s hope he’s even more impressive on his second date.